For bubble mechanics you only have to clip a bubble with a smart bomb to deal damage to it,

You have to hit the center structure of the bubble, not just the warp disruption sphere. Have fun slowboating 20-40 km in tidi while you get murdered by hundreds of capitals, subs and titans.

That’s not how the game works, and that is also not how a bubble crapped grid is setup. T2 large bubbles have a 40 km radius. You can put them 30km away from the gate and cover the spawn sphere out of range of smartbombs.

Plus, you again ignore the fact that your 200 BS or even 30 BS will not load. That game is already at capacity. You are trying to squeeze even more people into a maxed out system that’s already under tidi. Your Sisi tests are nothing but pointless eyewash that have nothing at all to do with reality.

Nothing preventing you from forming 24 hours early get thru undefended gate and safe log out in system.

Everything you cry about can be solved by more efford you are trying literary destroy peoples homes and cry its to much work.

Actually CCP uses these official forums as a dumping ground for criticism and complainers so their points mostly don’t get seen by anybody.

I believe Shipwreck’s advice is correct, the actual people who use, abuse, and lose due to these mechanics are on reddit. Also, actual CCP devs who deal with these things read more and are more active on reddit than here.

Nothing wrong with posting it here but you’re basically just doing ‘message in a bottle, hope somebody reads it’ on these forums.

Your points sound detailed and interesting, however I’m not familiar enough with Nullsov and Nullwar mechanics to evaluate them properly.

The forums are eternal, a reddit post gets down voted a few times and never gets seen again.

Until the developers shut it down. Which happened so many times in some many other games…

If someone attacked your core systems your leadership would use the same tactics. Hasn’t the home team had an advantage in every struggle throughout history. Sounds to me like you’re complaining it wasn’t easy and you couldn’t break through in 2 weeks so the game is broken. Switch tactics if its not working. I tried 3 times so the game is broken seems to be a poor excuse for losing. 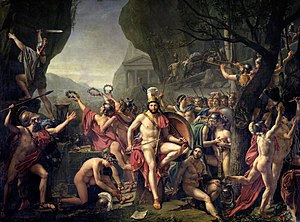 The Battle of Thermopylae (/θərˈmɒpɪliː/ thər-MOP-i-lee; Greek: Μάχη τῶν Θερμοπυλῶν, Máchē tōn Thermopylōn) was fought in 480 BC between the Achaemenid Persian Empire under Xerxes I and an alliance of Greek city-states led by Sparta under Leonidas I. Lasting over the course of three days, it was one of the most prominent battles of both the second Persian invasion of Greece and the wider Greco-Persian Wars. The engagement at Thermopylae occurred simultaneously with the Battle of Artemisium: b...

Nothing preventing you from forming 24 hours early get thru undefended gate and safe log out in system.

Plus, your baffoonery assumes that the hostiles do not form when you ping to get into system to log off. That is beyond ridiculous to assume. The gate is bubbled all the time, too, so you can’t just get in, warp off and log off.

@Ancantes_Auge_Dunier i think the people suggesting to get there sooner don’t really understand that a entire coalition of tens of thousands of people gets down to a few systems , that means all of them are living in the system/systems they are camping

Has anyone tried to secure the gate with lots of Smartbomb-fitted Titans to destroy everything that was sub-captials?

@Kalodote_Lafisques Nobody brings titans to a broken camp like that, so CCP is not getting any titans to die if they allow people to make these unbreakable cyno jammed system camps.

So thats why Titans were mostly used to hotdrop ratting cruisers in lowsec, now I get it.

I admit null wars are fun to watch but not otherwise my cup of tea, so my opinion here has little weight.

That said, my outsider perspective sees it this way–Goons were pushed back to the space they had the power to actually control. Most of the alliances are probably spread thinner than they can actually support if pressured, but probably any with sovereignty have the force to hold at least a few systems no matter what. And that is ok. Wars can have many goals other than annihilation.

If more really is required then, continuing to follow real world models, why shouldn’t it require tactics beyond busting down the gates? Such as jamming surrounding systems and cutting off entrances and exits for the long term?

But again, full acknowledgement that I am not invested in this. I just like to watch.

puts mirrored voyeur subglasses back on and sits back down