“Of the many early expeditions, though, no trace has yet been found.”

Using Amarr ship and weapons tech would be a clever ploy to throw off anyone thinking they could be Caldari/Gallente offspring. Which given current relations wouldn’t be good for the Triglav’s.

From their engagement with the drifters they resemble more of a subfaction similar to the drifters:they seemed to withstand drifter weapon fire very well,similar floating weapons outside the hull they look like spheres able to channel their beam atack through and very maneuverable ships.

IF the amarr or anyone else had the knowledge to build those ships they would have started using them to atleast destabilise their enemies,maybe even spearhead a decisive push to win the war,or just provoke small engagements against normal empire patrols to judge their effectiveness.

These guys are clearly not showing up on the radar,only brief cryptic video released by Concord and footage from destroyed drifter fleets.
We don’t even know where they are:currently it’s believed the drifter engagement took place in Anoikis in a shattered system but they could have also just as well been in old jovian directorate space as Caroline’s star explosion may have caused similar conditions.

“what was many now becomes one when one becomes four”

a collective is an association, so it could be that “many” factions joined this collective.

I have seen one of these ships in highsec. It was a Trig Medium, appearing heavily damaged, holding a stationary position 90km from the DED Assembly Plant in the Yulai system. There were no obvious weapons mounted that I could tell. However, the most interesting thing was the pilot. At first I thought it was another player by the name of Oveg Drust, he even showed in Local chat namelist. I looked into his history, and the character was created in 1994, even though EVE didn’t come out until 2003. It also showed that this character belonged to DED (2012-present), and before that he was part of Mordu’s Legion (2007-2012), the Caldari Navy (1996-2007), and State War Academy (1994-1996). This character, even though he shows up in Local, is most definitely an NPC.

I conducted a further test by locking on to the ship. At the time, I was flying in an Ibis corvette. He made no attempt to respond in any way; no moving, no locking on, nothing. Curiously, the icon seemed to suggest there are no shields at all on the ship, as far as an observer like myself can see. Armour was fully depleted, and hull was impossibly low (It could have been as low as 1hp left). I considered firing on the ship, but decided against it.

I attempted to contact the pilot on a private channel. As I expected, there was no response, further suggesting he is an NPC.

Next I attempted to ‘nudge’ the cruiser using my corvette, however I passed right through. In my opinion, this information is irrelevant for now.

This would suggest that the Triglavian Collective has strong links to the Empires, given that I saw this ship piloted by someone from DED. It’s also worth noting that they seem quite ‘balanced’ in my opinion, in terms of the relation the ships have to each race. Their mastery is geared towards energy weapons, that and the image background suggests Amarr. The mastery for tackling is a very Gallente thing though, and on top of that, the NPC I saw had strong links to the Caldari. Certainly a mystery indeed.

As of the time of this writing (~1400 EVE time), Oveg Drust is still present at Yulai X - DED Assembly Plant, if you want to see one of these ships in space.

I can confirm theres a triglavian cruiser outside ded x station badly damaged when trying to suicide gank it i dealt 0 dmg before dying to the sentry guns also received a criminal timer a killright on me from the npc and -0.25 sec status hit

Live update: It’s been 5 hours (now 1900) and Oveg Drust is still here. There are over 100 people in the system now. Shield, armour, and hull reps are ineffective, as is cap transfer (apparently, I did not attempt these myself but I believe the reports). In addition, scans show no cargo or fitted modules at all.

I hope these reports are useful. 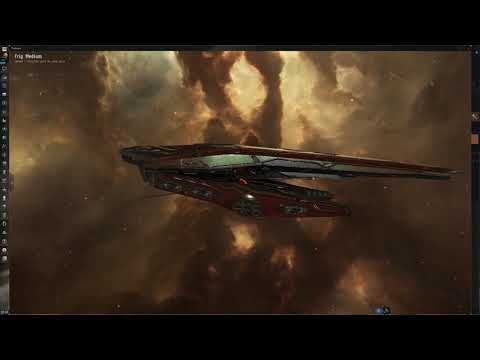 Going to put this here. Seems like the best place.

With the Triglavians I was really hoping they where some sort of pirate related faction. This is looking less and less likely I think. But those ships just screamed bonuses that grew for negative sec status.

The one in Yulai is super interesting.

It being seemingly immune to our weaponry seems impossible so I am putting that into the category of “Suspend your disbelief.”

I wonder if we do not have the sensor tech to see the shielding. This also seems like a stretch so I am going to assume it is actually damaged and this is purely a story point.

Honestly, I’m really hoping we’ll get access to these ships. I know they’re going to be as amazing as this mystery NPC is, but they still look awesome. And since they’ve been found in the frigate/cruiser/battleship variants, just like other factions, it’s hard to see why we won’t get them eventually.

Let’s see if it’s still there after downtime tomorrow

It would be cool if we’ll be able to access these. Which ultimately means we probably won’t…

well, it could have been, but at the moment there was no “when one become four”, so I thought that it was a wrong supposition

Honestly we don’t have the story yet behind these ships it could be indeed some shadowy concord wing fighting the drifters but from the little footage the good people at ARC decrypted we didn’t see drifters destroy any of these new ships just the opposite.

The fact the ship is still damaged and outside one of the non capsuleers access ports to the station with DED army patrols nearby watching the scene can mean alot of things:maybe the pilot went rogue if he was part of shadowy group within DED(would explain why no other ships were seen perhaps they were built away from prying eyes),another aspect could be the pilot is unconscious due to a failure in ship systems,another could be he simply stole the ship from another group and brought in to Yulai to be examined.

Ship is still there.

There is no update.

Is it still there after today’s DT?

It is. Oveg Drust stated to the pilots around the ship:

“This ship is under quarantine and is being inspected to make sure its safe before docking. No further statements will be made at this time, please keep your distance.”

So either radiation concern from the new tech or something viral like a disease then.

That short statement still keeps the chances that the ship was stolen/salvaged and not necessarily built by Concord open.

Or it’s just precautionary. “Uh, we don’t know what happens with this funky singularity thing, so maybe let’s not take a tiny black hole inside the station.”

At what time was that message sent, may I ask?