I am working on Incursions and will keep a few notes in this thread.

I will also try to keep the price and value of those ships in this My EVE forum thread, although that data may be redundantly kept in the Ships thread, so to save the time it takes to go back and forth between the 2 threads.

So, this thread in the My EVE forum should be more about being a Guide for Incursions, and a reference for it than the thread in the PvE Ships and Modules.

So, I will make a second post tomorrow or later about the types of Incursions, and will start with High-Sec Incursions.
EVE University keeps webpages of info on those.
The ingame EVE Online Incursions Communities each have their own information related to those Incursions.

I personally started to run Incursions in High-sec as it was the easiest way for me to get started.
There is more details to this, which can be discussed later.
I started with The Ditanian fleet.

The hardest part for me was to get the skills required to be accepted.
I then got an EVE Online pilot from the Bazaar for around 7b to 15b, I forgot now.
The thread is still online and I can verify the details later on.

Edit:
https://eve-marketdata.com/price_check.php?type_name_header=vindicator
I’m currently buying a 2nd Vindicator ship for an Alt Incursion pilot to increase my income and to increase the amount of time that I can be flying Incursions.

To increase the amount of time I can fly incursion, I can place multiple ships at different Incursion focus, which other Incursions Community fly at.

Both of my EVE client were restarted.
I will now log them back in, as I need to transfer money from one account to the other to be able to buy the Ship Hull, before fitting it with Incursions modules.

I guess you dont have a notepad or something?

personally started to run Incursions in High-sec as it was the easiest way for me to get started.

Almost no one runs incursions in low/null.

I started with The Ditanian fleet.

Sheilds are generally better than armor. But okay.

What’s that?
I will run incursions in null, so that’s why I posted this ,
for in case that you want to make me seem questionable or some other things.

Running incursions in null is much more dangerous, and can pay more (or less, if not).

I use Notepad and I also used other similar text editor before, like Notepad, some for making website markup codes.
I started with WordStar and also, the DOS Editor programs, EdLin, and MS-DOS Editor program, all the way up to the new versions when Windows 95 came out.

I usually run shields, but sometimes, there are no shields incursions running.
Something good to do would be to make a sample list of incursions fleet uptime.
It would show where the holes are and why and how it’s more efficient for stability to have both a Shield and an Armor ship (or multiples).

Either way, thank you for reminding me about this thread as I do have a list of the items bought for value comparison.
This can be a good guideline for market value comparison later on.

I will run incursions in null, so that’s why I posted this ,

Hahahaha, okay, good luck with that.

I had an old Megathron with parts but I didn’t move any of those parts yet, although I could have.
The Alt (alternate) pilot which could fly that 2nd Vindicator cannot use the low slot Tech 2 modules yet, except for the DC II (Damage Control II).

So, I am now flying in an Amarr Shuttle going to Jita to bring a 500MN faction module. 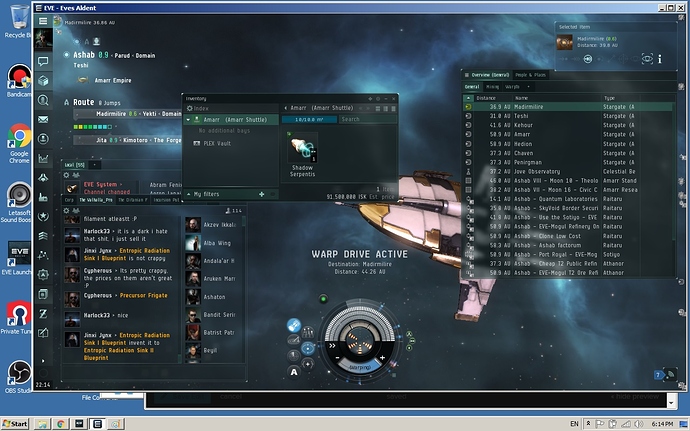 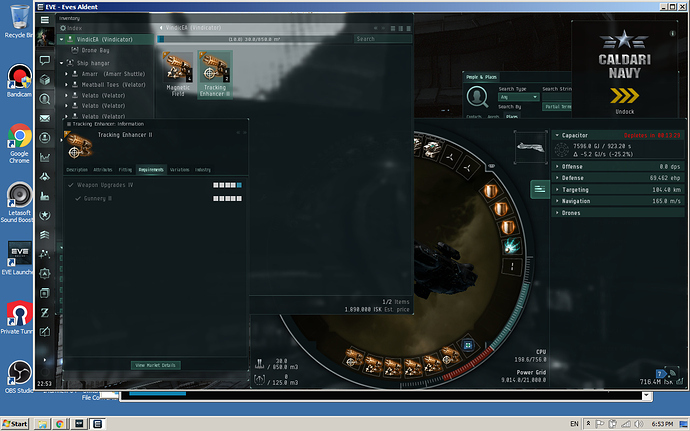 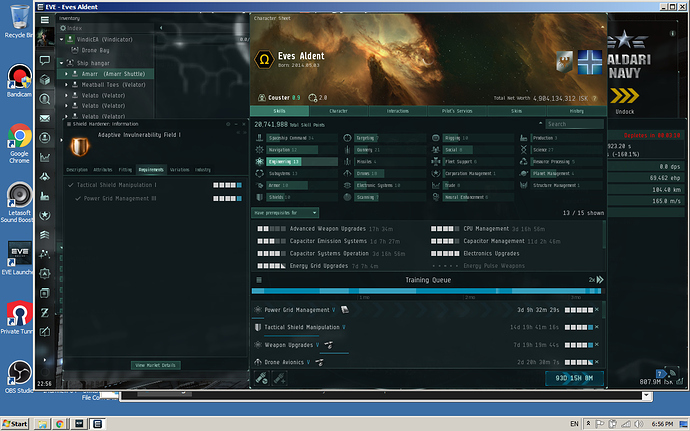 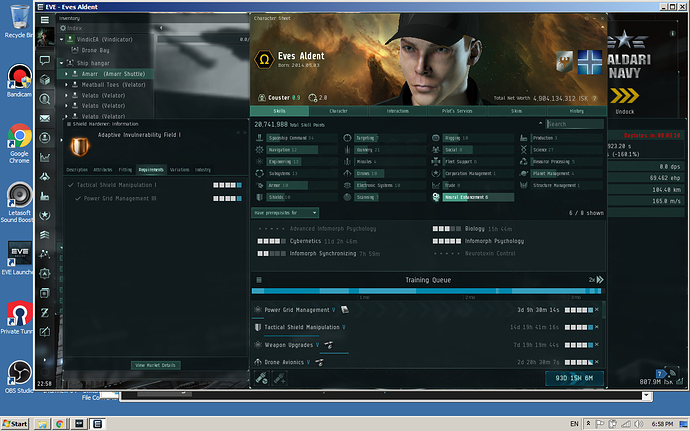 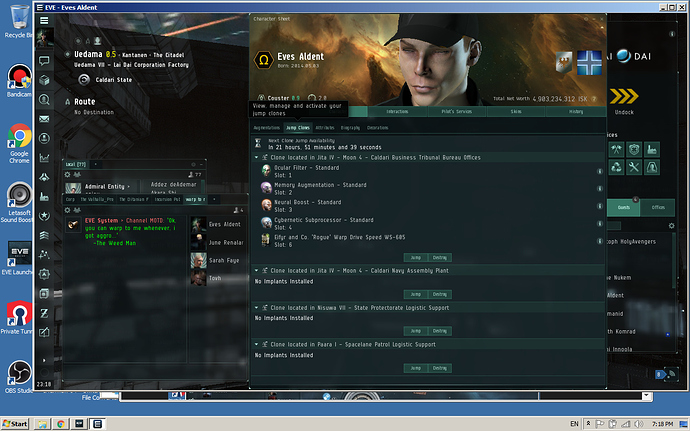 image.jpg1280×800 345 KB
I made an error using Jump Clones, as I already was in better implants for training speed.
I will have to jump back into my previous implants tomorrow to fix this. 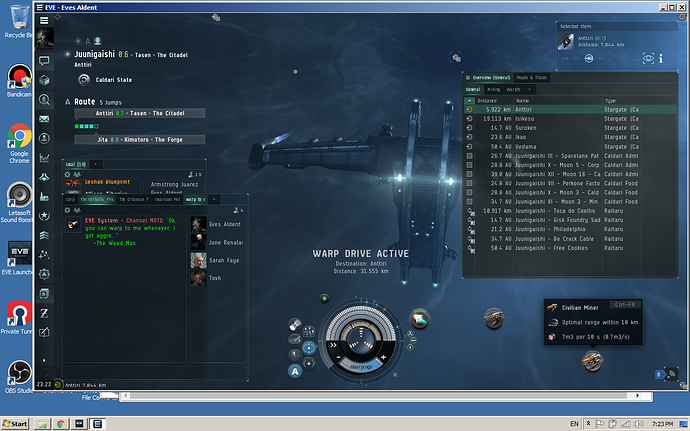 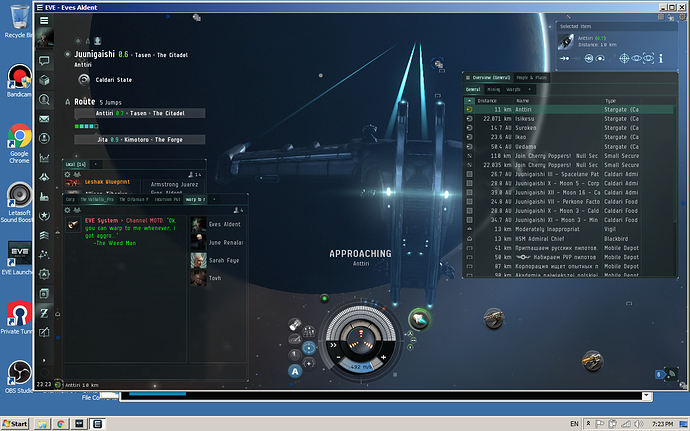 I don’t understand why your guide has screen shots of you autopiloting an officer mod or when you can use +5s. What exactly is the point?

what do you mean by +5?
And, which officer mod? I never even carried one.
3 bad out of 3 is not so hot.
Is your vodka any good? 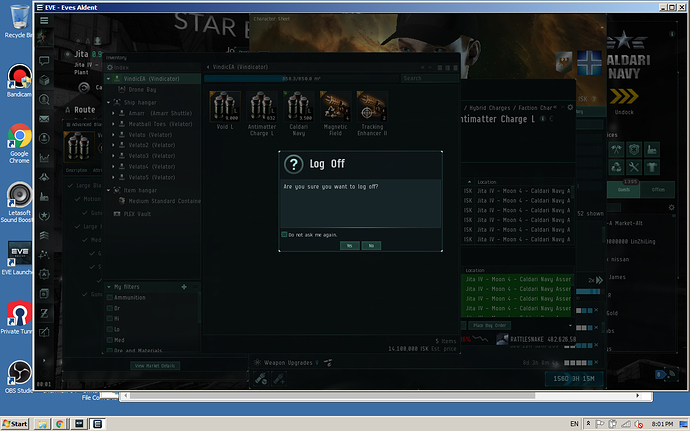 image.jpg1280×800 263 KB
New ammo, but also can’t use the Advance Ammo yet.
Also, the skills to use them changed and includes level 5 hybrid guns, small , medium and large, although they can be loaded.

I have to go to work now and I forgot to post something else I was working on thanks to the interactive question.

Yes, it was:
http://eve-gatecheck.space/eve/#Uedama:Jita:shortest
Your route (shortest route - 6 jumps):

7 posts in, no incursion seen.

This doesn’t seem to be an incursion thread at all. Not unless you can run incursions in a shuttle.

This incursion thread is not about making it seem like an incursion thread but focuses more on being an actual incursion thread with the details it takes to get the ship and other details around it so new players can join.
They can also know what it costs, how long it takes, what skills are required.
I will also compare a few Incursion communities, including

I will also compare implants, locations, distances, travel times, and more.
I also have a bowhead pilot but it is not active at this time.
The last TVP (4) focus has moved to another incursion focus.

I will also go over the previous 7 posts and list them by subjects.

Edit:
It’s also not about doing what we’re told to , so as to cause us to be attacked. 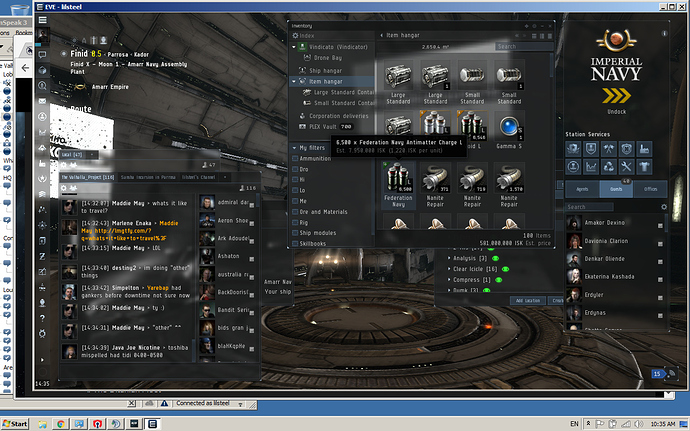 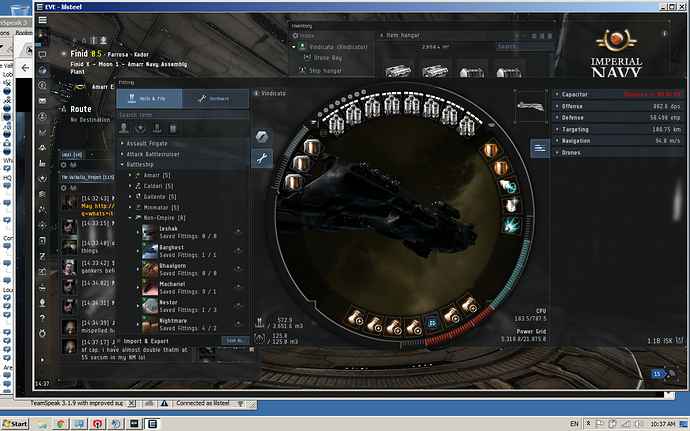 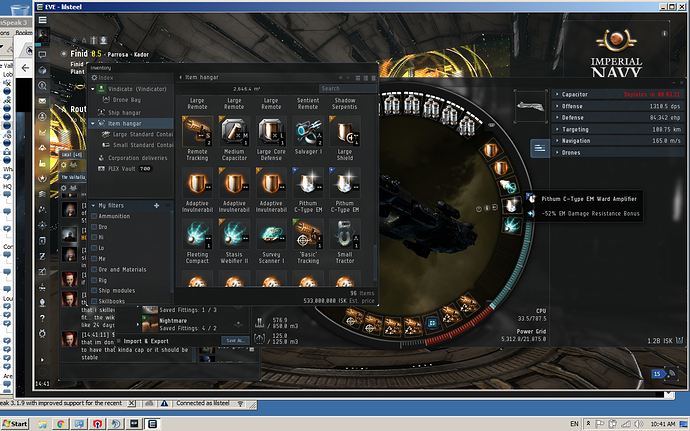 All the wallet data is on the Alt.

you autopiloting an officer mod

Is your vodka any good?

Moving Scimitar to one site in a Wreathe but got D/Ced near Niarja.

This is a “cheat sheet” I’ve made myself for Vanguard sites. Unless they’ve changed Incursions in the last one or two years should it still be accurate. It shows the three different sites and the ship spawns you may encounter. It also tells you what the ships do to you - DPS, orbit range, damage type, e-war, neuts, etc… Because the numbers of ships can vary are some of them slightly gray.

I also cannot remember why we were not supposed to shoot the Eystur in the OTA anymore.

I also cannot remember any more why we were not supposed to shoot the Eystur in the OTA anymore.

Because they respawn (if shot) and fly away (if not shot).
Free ammo / energy / time , etc.

Btw, my Scimitar and Leopard made it to the focus, in the Wreathe.
Not without events and adverse events however.

I ment faction mod. You literally talked about using +4 implants and said when you could use +5s. How do you not know what plus 5s are?

Only one of the 2 incursion pilot or 3, if I count one alt which does support for them, in some way, can use +5s implants.

Yes, Eves Aldent, the Incursion Alt, is not able to use +5 Implants, unless he trains the Cybernetic skill to level 5, which would have taken him 11 days with +4 implants.
He’s now possibly in +3 implants.

I ment faction mod. You literally talked about using +4 implants and said when you could use +5s. How do you not know what plus 5s are?

The focus I was at may have been completed, regardless I didn’t run incursions there.
I moved 2 ships, and I almost have enough to get my Bowhead pilot active again.
It would make it easier to move 3 or 4 ships from focus to focus.
Not counting that the Bowhead pilot can also move other ships to other Incursions communities focuses.

Edit:
It took over 20 minutes to jump 1 system from Jita to Perimeter.

I caught up on some rest yesterday.
The screenshot didn’t save to the EVE folder.
It was about a Duel requested on exiting Jita, while my system was stalled for over the 30 seconds limit to accept or reject the duel request.
Now, I had clicked on Reject before but did the processor register the input or , refuse to acknowledge it as if in the memory buffer due to processing problems.
My ship was not destroyed, but the screenshot also refused to function. 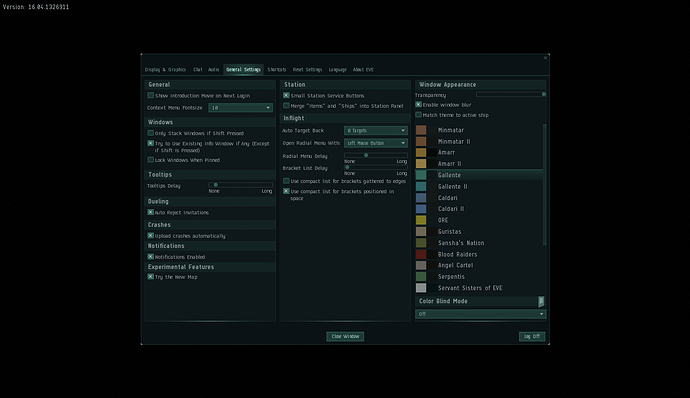 https://wiki.thevalhallaproject.info/doku.php?id=fittings:hq_doctrines_and_ship_fittings#vindicator_basic
Got a new Wreathe and getting the Rigs, but I will need to transfer money, tomorrow, I’m going to rest for work tonight now.

I also have to transfer a
Pithum C-Type EM Ward Amplifier
ou of 3.

Edit 13:08:
I did have enough time for it.
It seems there is still one module I need to train or 2.
I still have to use the jump clone and come back. 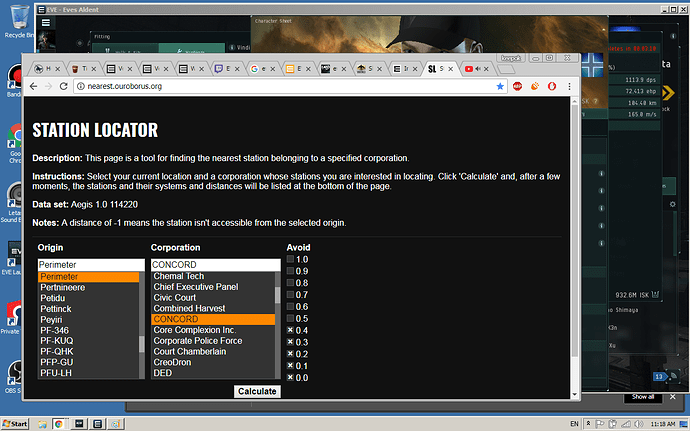 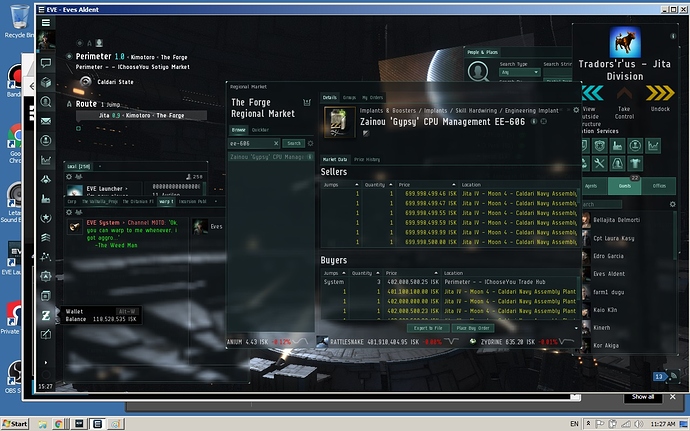 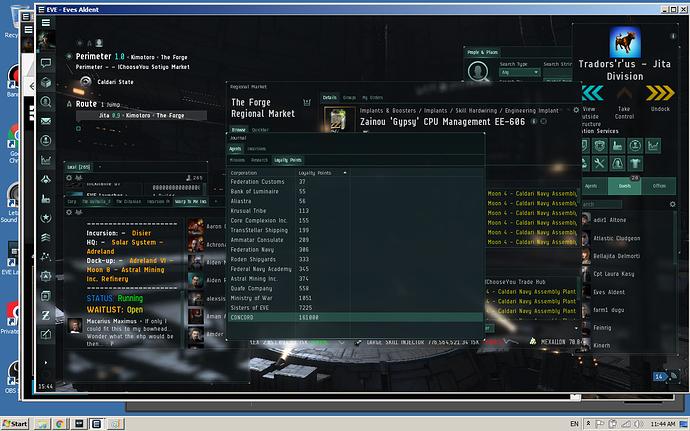 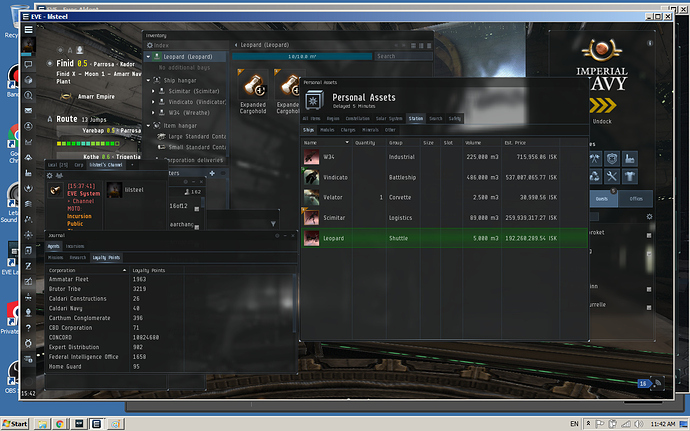 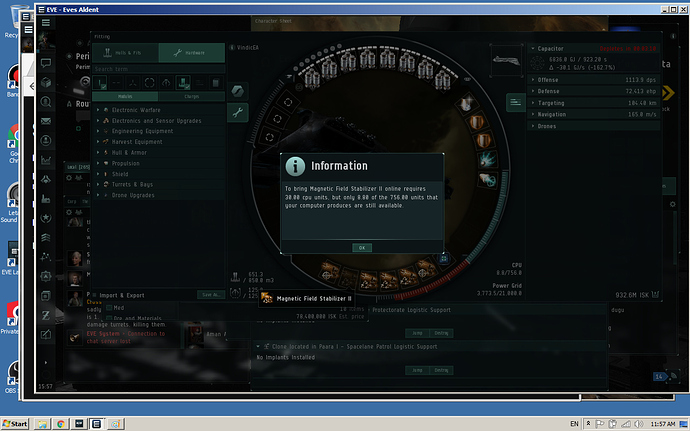 image.jpg1280×800 270 KB
This screenshot shows that the Vindicator cannot have the Magnetic Field Stabilizer II online, due to a lack of CPU .
This is why the 250m ISK Zainou EE-606 implant may work (I am not even sure it would work with it).

2 or 3 solutions possible now.
Get the implant from near Finid, which is some 13 jumps away, and would fit in the Leopard ship. 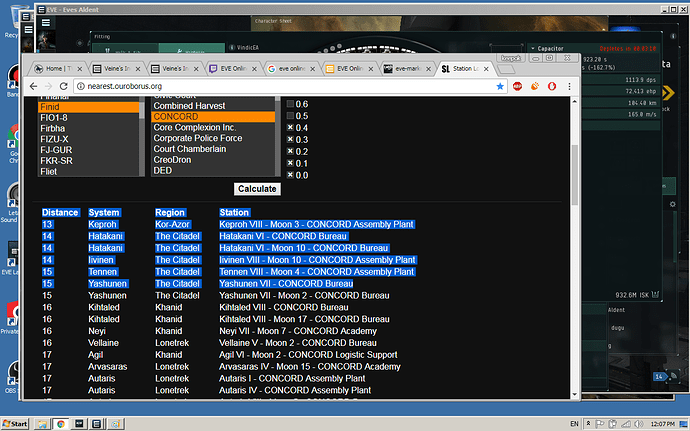 Second solution is to go to Vellaine from there, which is 16 jumps to the intended party.
Compared to 27 jumps if going to Keproh.
The 3rd option included using jump clones to change the proximity.

The 3rd Option was used, since there was a Jump Clone available in Jita.
However, I made an error by jumping there from a citadel rather than a nearby station. 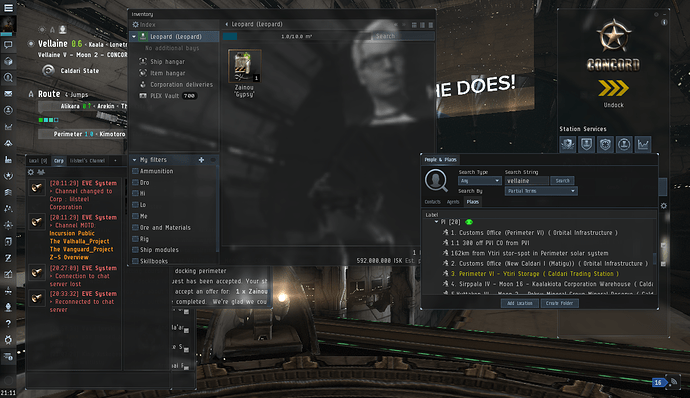 Edit 21:55:
Zainou ‘Gypsy’ CPU Management EE-606 requires Cybernetics level 5, which he doesn’t have before 13 days, without implants.
So, I have to go back and buy the 604 version, and verify that it works with Cybernetics IV. 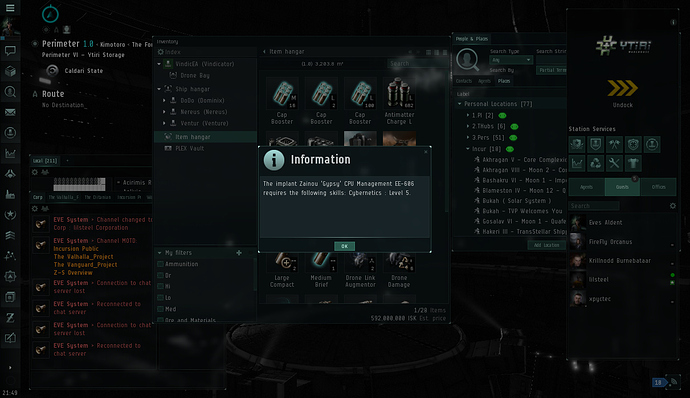 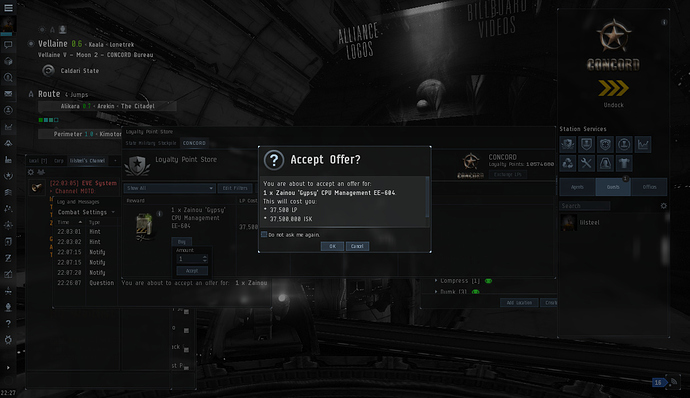 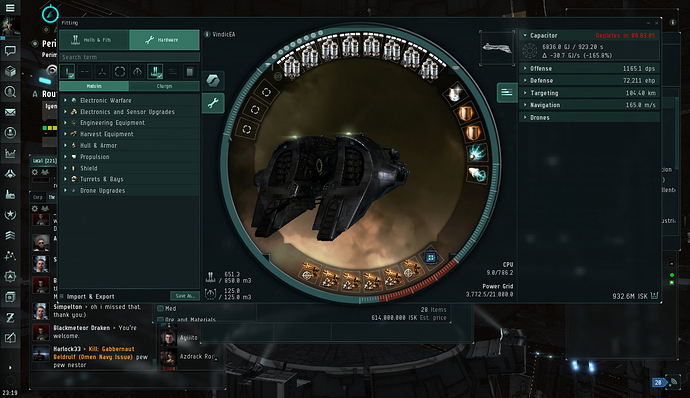 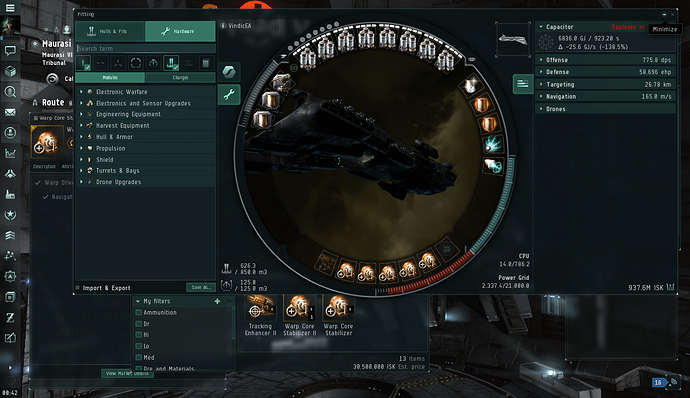 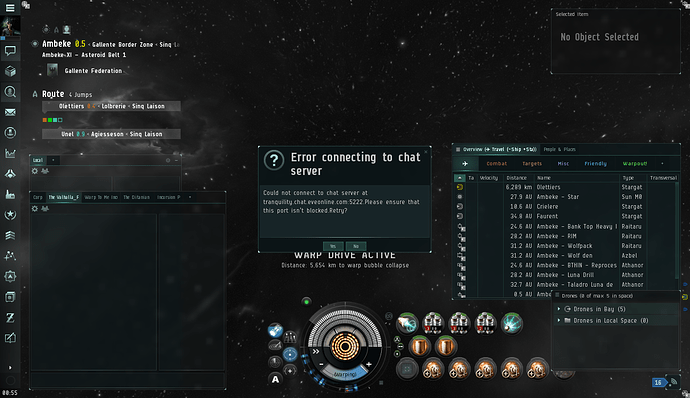 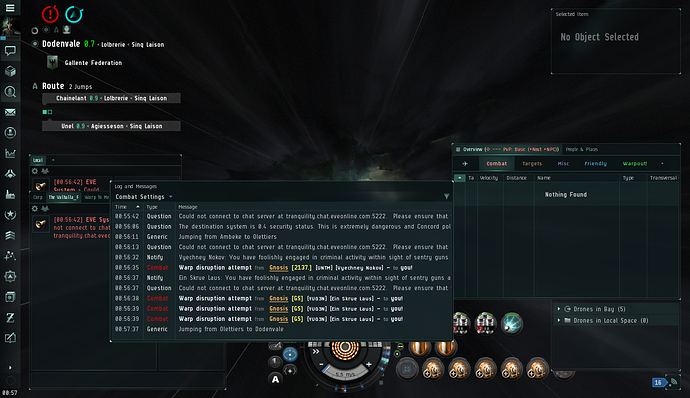 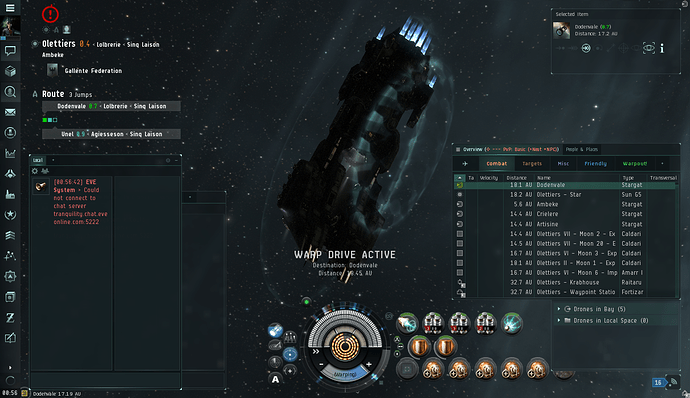 Yes, that “Could not connect to chat server” error also causes the local chat to refuse to display the data while in known space, which is would otherwise display and record in the log files.

My only avoid list is Niajra / Yekti and it goes to other systems
From Deltolle, it goes to another system than Aufay 0.5.
It reaches destination in 5 jumps anyways, which is the same amount of jumps the site lists. 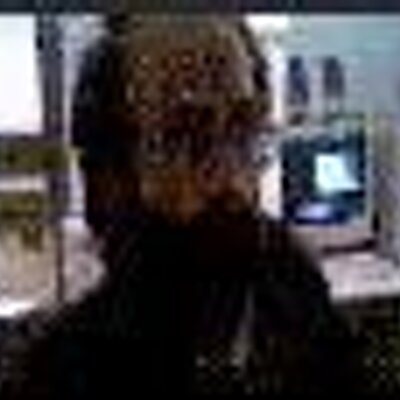 Twitch is only publishing it as private.
I have to get the Bandicam Watermark off Friday.
That one and/or some other program.
Veine_Miromme (Veine Miromme) June 14, 2018, 9:41pm #20

to get a Basilisk with no modules though

Stopping in Eust to get an Ibis.
Going to pick a Nightmare.
It was the wrong Nightmare though, it’s an Armor fit.