What am i looking at here?

I was scanning for a wormhole. I warp up to it, there’s a bunch of rats sitting there with names i don’t recognize. Was it triglavians, an insurrection? Some other screwed up CCP patch?

I have a cruiser. I can do L2 with it. I would need a BC to do L3. I have a fair amount of skills to do that. Drakes are 75m ish. There is no way i can pay for that or replace it as a newbie.

CCP and it’s Korean friends are draining the soul out of it’s game. How are new players supposed to start playing this game?

Or grab your wallet and pay real cash for PLEX and other overpriced stuff in shop, so you can speed up the process of obtaining ship & gear, and then you can loose it.

Ah, EVE Online - a wonderful and encouraging virtual world with microtransactions and developers who are obsessed with the idea of chaos and destruction, ignoring the opinions and criticism of their clients and, by the way, failing to implement into this game the new mechanisms they invented themselves.

Warping straight up to a hole is never a good idea. Warp at distance and gather some visual intel. Possible trouble, or things you have no info on ? Warp out, look it up, use google as your life jacket.

And beware those wormholes that are announced on your overview by a beacon. Those have quite aggressive Drifters hanging around.

How are new players supposed to start playing this game?

The basic reflex should always be to look stuff up before you warp into something you know nothing about yet. Especially for new players that will prevent some unnecessary losses. Also, there is no barrier between higher level content i.e., lethal stuff, and content for rookies. You can stumble upon certain doom at any time if you don’t prepare.

If you provide the names of some of the rats, people could help you define what they were.

As Wadiest said, warping right in to things can be deadly. Warp to quite a distance away until you’re more confident (50-100km). That should give you time to look around while aligning with a distant object, and warp out if needed. Warping in at 80km and warping back out and back in again seems clunky, but it’s quite a bit faster than getting blown up and re-shipping.

For “how do we afford to start”, running any set of Career Agents (there are 12 sets, 3 for each faction) will net you about 10 million ISK or so and a variety of ships. Generally enough to buy and fit out a decent cruiser or several exploration/scanning ships. Run some missions or do some relic/data sites or run some combat anomalies for more cash until you have enough for a BC.

Then be very careful with your BC because they’re nowhere near as indestructible as people sometimes feel they are when they get in their first one.

Sweet! I haven’t used this Drifter meme in a while: 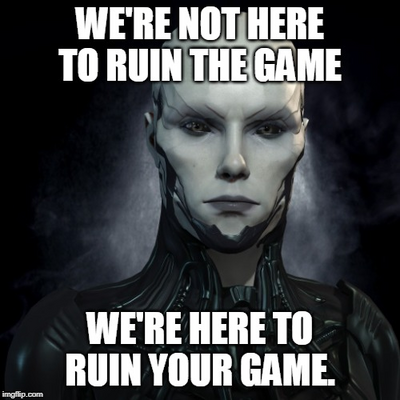 That’s a templar, an amarr … dammit.

How are new players supposed to start playing this game?

New players managed just fine when it was much harder to grind ISK …
… and when there weren’t even any tutorials.

You can try figuring it out, which is a part of the game …
… or you join a group to make friends, who can help you …
… or, well … you’re not good enough and better play a different game.

Hundreds of thousands of people managed just fine in the first decade of this game …
… so I’m pretty damn sure you can do too.

and back here, right here, right now, we will allways be, creating rhymes, and time, in our history

One of the golden rules of eve is;

Don’t fly what you can’t afford to lose.

I have a ship I can’t afford to lose,…that I lost…

People missing the point i think.

New players buying a 75m Drake with 2m and a cruiser.

Pretty much seek the “work smarter not harder” principle.

Go do the Sisters of Eve Epic Arc with your cruiser (starting asgent sister alitura in arnon system) and the career agents.

Then when you are ready (player-skill-wise almost more importantly than skillpoint-wise) do level 3 missions.

Also, do keep in mind that there are many other things to do in EvE besides missions if you wanted.

Good luck, you got this!

Buying things in that faction’s loyalty point store with the loyalty points you earn and then selling them on the market will earn you far more than grinding for just the mission rewards.

Damn, I never knew that. I’ve been saving my lp for a navy drake and raven.