What are the significant sources and sinks for ISK?

Yesterday I noticed that in theory EVE’s ISK/PLEX market can collapse, most likely from insufficient supply.

Mwa, only happened once on the plex side, packs saved the day. Opiate economics has become much more integral nowadays.

for me this ^ was def. #1 way to destroy isk. a few billion for capital bpos

The point of the post seems to be information. Some people ask questions to learn something new.

The OP is concerned that she will not be able to afford Plex anymore.

The OP is concerned that she will not be able to afford Plex anymore.

The OP has sufficiently explained the nature of their interest. And doesn’t add information in response to “stingers” from semi-literate (write but can’t read) people who haven’t read the thread.

I agree, you have explained it, even though I still don’t understand you goal. There is no magic I can see, and nothing is unusual. You are hunting some phantoms, I guess.

Tipa
This is the only character I post from. My use of 3rd-person is an “idiot-trap” (now probably sprung in advance, but who knows?).

The PLEX market as a whole is interesting because (IMO) it’s not like most (perhaps any) real-world market(s). I won’t go into more detail - too much effort for a probably non-existent audience

[Plex%20Sink%20F] I made a video, so check out the link below if you want to skip the wall of text. You can rest assured that I already feel retarded making this post. But here’s the deal; CCP asked the CSM for plex sink ideas at the CSM winter summit. Thus, it’s probably safe to assume that CCP either was, or still is, looking for ways to further monetize the game. Now, before you guys grab your pitchforks, I better clarify that I am not trying to be an agent provocateur with all this. …

I usually look to those that actually understand a system for analysis.

This thread would be like an earth/climate scientist saying “I want to model the weather of planet earth, but I don’t know what factors are important. Can someone point out the important factors so I can teach what is actually happening?”

You’ve already revealed yourself to NOT be an expert on this topic. Further, you seem to be approaching this biased toward the conclusion you want to point out, since you have basically stated that conclusion before you even had the relevant data.

If I was an expert on the topic I would not have needed to create a thread entitled “What are the significant sources and sinks for ISK?”.

As for the RL money/PLEX/ISK market: If you were less ignorant or a little smarter you’d either see why it’s unusual compared to real-world markets, or you’d explain why it’s not.

But on the bright side - now you have an opportunity to disprove my statement. Just describe a real-world “product” and market that’s similar. There are well-known candidates BTW. But if you knew what they were you would not have used weather modelling (of all things /lol) as an example or metaphor. 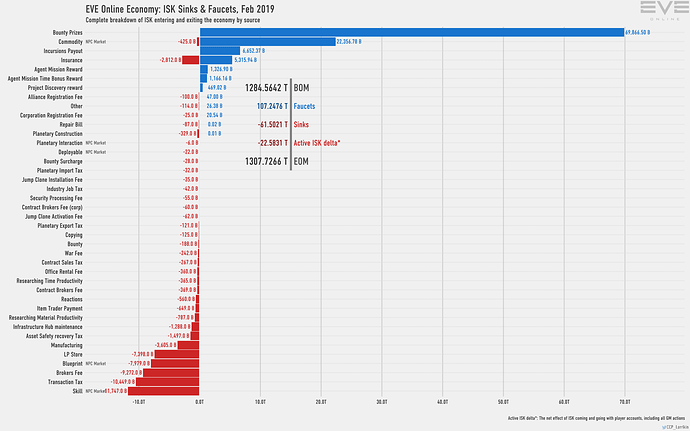 Tin foil hats for sale! One mil ISK each through 1 bil contracts in Jita! Grab yours now!

If ISK in and ISK out doesn’t more-or-less balance you’ll get consistent, fairly high inflation.

You also have to look at the real economy (i.e. the stuff players make, yes it is virtual, but in economics when you make stuff or provide services those are considered “real” goods).

Most games get someone numerate in early on. They help the designers set the game up with low inflation. Later, the game company will intervene if necessary to avoid “hyper-inflation”.

Most games do not have a market as complex and extensive as in EVE.

What’s the point of the post? PLEX and Skill injectors demand is higher than supply, price is rising, so what?

Not always, it was dropping for awhile there.

I have a moderate personal interest in the RL Cash/PLEX/ISK markets, because it’s unusual.
In order to understand the in-game price of PLEX and the liquidity of the PLEX market, I also need to understand what drives the quantity of ISK.

ISK is created by players. Players trade their time for ISK. ISK is what has been described as a synthetic commodity currency. As a player trades more and more time for ISK the opportunity cost of his time goes up–i.e. it becomes increasingly likely he’ll stop creating the ISK (for that day, month, etc.). Further, as other players increase the ISK supply and the purchasing power of the ISK he is creating in his wallet goes down this will also increase his opportunity cost time (relative to the ISK being created). As such, for a given set of ways to generate de novo ISK, there will be a natural limit to the creation.

Where we can run into trouble is when CCP changes something about the various methods. If CCP makes it easier to generate ISK using a given method then players will end up adding more ISK to the economy over time. And if CCP nerfs something the opposite.

The in-game PLEX market is interesting because it’s weird, and because IMO it’s susceptible to “long-tail risks” (like the risks that, if handled well, would have stopped the “2008 meltdown” occurring).

I don’t think so. The markets in EVE are too primitive relative to RL markets. For example there really isn’t any leverage in the game. There is also no fractional reserve lending. There are no banks for there to be runs. There is no credit for all intents and purposes. That is there is no credit market to seize up and cause majore problems throughout the rest of the game.

The PLEX market as a whole is interesting because (IMO) it’s not like most (perhaps any) real-world market(s).

The PLEX market is not that hard to figure out. The out of game market looks like this, 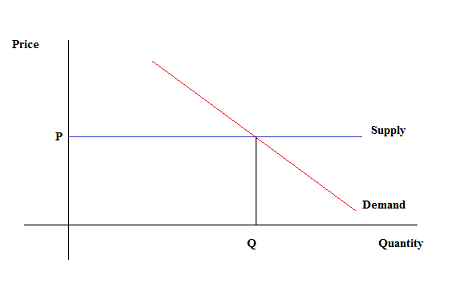 Supply is determined by the price and is perfecly elastic. Demand, as shown here, is linear and can be inelastic, unit elastic, or elastic depending on where it intersects with the supply curve. The demand curve could also have a constant elasticity, but I’m too lazy to graph that. 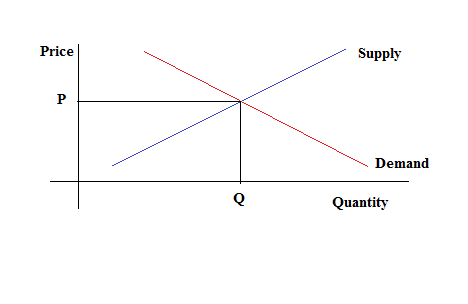 These graphs apply at a given point in time. Over time the PLEX market is most likely dominated by technical trading strategies that is why we see more trades and volatility than if we were in say a market with more of a rational expectations/efficient market hypothesis.

There is nothing super duper special.

There is nothing super duper special.

Very educational post, thank you. You also did not hint at anyone in particular being less intelligent than you are, which OP did on number of occasions.

Very educational post, thank you. You also did not hint at anyone in particular being less intelligent than you are, which OP did on number of occasions.

I reacted to two “destructive” posts: one guy who lied about me, and another guy who said some spectacularly stupid things with an obviously negative intent. I didn’t over-react in either case.

The rest (apart from your post) has been interesting and useful. Including Teckos’ last post - we don’t agree 100%, but overall it was constructive.

The PLEX market is in weird shape right now. Perhaps events will prove which of Teckos or I is more nearly correct.

How does this work?

Yes. Seriously. Have factions create charities that accept ISK from capsuleers. Have these charities create in-game news begging asking for money. Give them some room in World News based on milestones or whatever. I’m not saying that it would be a massive, raging success, but I’m saying that it’s doubtful that the amount of devtime needed to create such an ISK sink would be massive. The returns: People would feel like they can contribute to the health of the game/society. People would hav…

multibox or quit, it wont get easier