What is a CODE Bot Aspirant? - Protest Against CODE

Topic moved to Crime and Punishment.

Botting is using unauthorized automation and is a bannable offense.

If you think all those ships are magically moving in sync by alt-tabbing, locking, and firing simultaneously… I have a bridge to sell you.

That limit being no input broadcasting(duplicating an action from one client to all other clients).

I wonder how one person can control so many client at once within the narrow window of time that a gank must occur? Not trying to cast any shade here, I am genuinely curious.

If , however, you still suspect any player of using unauthorized automation, then report them and let CCP sort it out.

sure… CCP ‘sort out’ their RMT partners…

Ah, found the salt for my popcorn! Thank you OP!

That train leads to tin-foil land.
Not my destination.

–Gadget flags down the conductor.

If you think all those ships are magically moving in sync by alt-tabbing, locking, and firing simultaneously… I have a bridge to sell you.

Server ticks…if multiple clients all hit fire within the same server tick, they will appear to fire simultaneously. I’ve done multibox mining in the past, flipping through clients and hitting F1 all within the same server tick is doable without automation, it just requires some prior set up; one hot key for alt tab ( only affects the OS not the client so totally legit to have simultaneous key presses programmed to one key) and the next few for align, scram (optional, you only need one scram to gank something), and fire (one key press per action being the CCPs policy for hotkeys used within the client).

I don’t have so many accounts but my friend does and after some practice, he was able to use 8 characters in one gank. When he tried more, he couldn’t do it fast enough and the first ship was already blapped by concord.

Now, the guys you talk about usually controll 11-15 characters in gank + support alts. Maybe they are really so fast or are using some kind of client setup I never thought of that makes it much easier (no to the multiple monitors).

Also they don’t attack in same moment, dryson when you get ganked next time and I am sure it will be soon, check the log for times, if all the catalysts fire between 3second interval it is clear input broadcast. If not it is legit…

if all the catalysts fire between 3second interval it is clear input broadcast.

I run a programmable mouse and keyboard; if I was inclined to start multiboxing again within a week I’ll have remastered the art of running my thumb down the side of the mouse and hitting the programmable buttons to switch between and send single actions per key press to clients. In your 3 second window I could have all of my accounts perform the same actions.

Topic moved to Crime and Punishment. 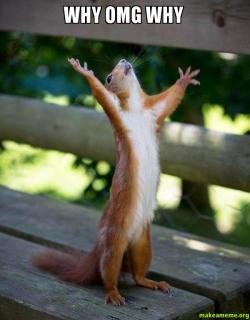 snip There is a Filter for words for a reason. IF an image contains a filtered word, best not use it. ~Buldath snip

snip There is a Filter for words for a reason. IF an image contains a filtered word, best not use it. ~Buldath snip

I didn’t see a swear, I swear…

That is afaik exactly what input broadcast is.

Whether is there difference, for purpose of EVE rules, when this is achieved by programmable keyboard/mouse or 3rd party tool is a question.

What I do/did is map the programmable keys on my mouse to various keyboard shortcuts, the only one of which uses more than one key (alt tab) doesn’t affect the client at all as it’s an OS keyboard shortcut.

Single press for a single action in the client is legit, regardless of whether it’s a key my keyboard or a button on my mouse; rolling my thumb down the buttons is the same as running my finger along f1 through f4.

Input Broadcasting would be having the player perform one sequence of inputs of any length that is then copied and sent to two or more client programs, bypassing the need to alt tab and manually initiate actions on any clients beyond the first.

The definition is vague. It is normally judged in a case by case scenario. Input automation with programable keyb/mouse that does not repeat or has conditional programming is MOSTLY allowed. In doubt, do not use. This game is driving Miss Daisy Online… if you need input automation you are probably doing it wrong.

Input automation would be reassigning a single key to simulate the pressing of many keys in order to enable a sequence of multiple actions to be triggered by the use of that key; a keymap that sent the keystrokes for scram, web and fire with a single press of a button is an example of input automation.

Keyboards and mice that support macro use are fine to use ingame, as long as you don’t use the macro/programmable key functionality beyond single keystrokes.

he was able to use 8 characters in one gank. When he tried more, he couldn’t do it fast enough and the first ship was already blapped by concord.

Hahaha, what a beta. You must be mega bad if you can’t get 5 characters attacking per tick, much less before Concord lands looooool

Typical trash agers who can’t achieve anything in-game so they just sling mud at the Chad gankers.

IIRC Kusion streamed and/or YouTubed his gank set up to prove he’s not automating. I can only guess some of the other multibox gankers took notes and do it the same way, since they aren’t banned.

Highsec is the endgame.