WTS one C1 wormhole with static HS. No effect on this WH. (Terry approved)

One fully fit, armed and fueled Astra (50+ days fuel at the time of writing), ready to be transferred to the new owner. Including at least 60 standup fighters. A number of industry ships (approx 16) included (Ity MK V’s & Epithals etc).

7 POCO’s ready to be transferred to the new owner.

PI is excellent in the system, with P1-P4 available. Including wetware mainframes, nano-factory, and organic mortar applications. Also plenty of great P2 & P3. Should have no problem making upwards of 1 billion ISK per character, per month.

No sticks or other obstructions in the system. All the heavy lifting has been done, just for you. So it’s ready to be moved into immediately.

6 billion ISK, for everything. 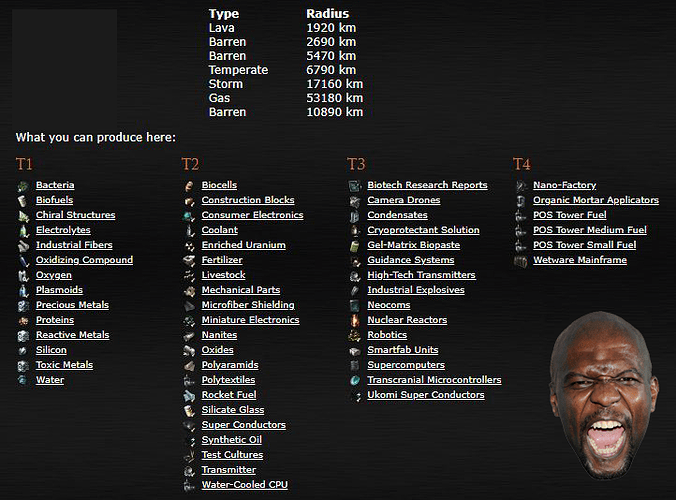 This is a friendly bump. Wormhole is still for sale and Terry still approves of the PI.

Another bump. System is still for sale.

I can list out the moons and types. Or are you after survey data as I have not run a full moon survey.

Still up for sale.

Wormhole is still up for sale with a price change to 8 billion ISK for everything.

Have your very own C1 wormhole with a fitted Citadel and POCO’s today.

We buy a lot of wormholes like this (HS static, POCOs included, usually a struct).

For a wormhole like this, we’d typically pay 2.5-3 billion. For that price we’d be interested, but not for 8 billion.

If you do decide you are interested, ping me on the Wormlife Freeport Operations Discord: https://discord.gg/Nz964cc as Heretic.

Just 1 noob question. By HS static does it mean its connected to a random HS system or a specific one? Never understood this part.

Thanks for contacting me regarding the WH.

The price you’re offering (2.5-3billion) is unrealistic for a WH like this. With a fully fitted Astra and 7 pocos, all of the hard work is done. I’m willing to negotiate on the price a little but the price you’re offering barely covers the cost of the structure, fittings and pocos themselves, let alone any of the effort and time that goes into removing sticks, structures, pocos etc and putting up new structures.

I’m hoping you have a chance to reconsider a more serious offer and look forward to doing business with you in the future.

It means the wormhole always has a HS connected wormhole. Even when the old one collapses.

Yes I get it, but. This static WH which leads to HS, is a specific HS system or a random HS system? In other word this static WH leads always to a certain HS system?

Hello again. So by static it refers to the fact it always has a HS system attached, but the actual HS system changes when the wormhole re-spawns.

Take this as you’d like, but I’m honestly trying to help you.

We have bought 40+ wormholes over the last couple of years and sold about 15+. Yes, I realize that the time and ISK you’ve put into it make the price you’re asking for make sense to you, but much of that literal ISK value is not useful/valuable to a particular buyer.

While we will occasionally offer 10% or so over the ISK value for POCOs, that is because they are such a pain to bash and it’s a convenience charge. When a struct is involved in it, the average value you can buy/sell it is usually around 80% of the value of the struct itself, and probably 25-50% tops for the value of the fittings.

I know it doesn’t seem fair, but that’s the realistic cost of what you’re likely to get. Yes, you might get really lucky and find someone willing to pay more, but expect to spend a significant amount of time with this on the market.

To be clear, we don’t really need this particular hole; I’m not trying to talk the price down, just giving you information as to what these actually sell for. Wormhole sales are, unfortunately for sellers, very much a buyer’s market in EVE.

Cnaar, looks like you have been evicted from a few wormholes and by god the state of your kill board lol. No wonder you can’t afford to pay for a decent one with all those losses!

Orion, I wouldn’t pay too much attention. As you rightly say, with a fitted structure, fuel, fighters, etc, pocos, and perfect PI, that hole is definitely worth >5b minimum. I know of two C1s sold for 20 and 25b respectively over the last 6 months. It will suit players looking for a PI farm: 1b / month per toon is easily made with those stats. So it’s a money printing system…

Thanks. It appears some don’t appreciate the true value of a prepped wormhole.

Wormhole is still up for sale. Open to negotiation on the price at 8 billion isk.

Comes with everything listed, including over a months fuel.

Still up for sale.

Wormhole still up for sale.