Preface: I humbly submit my first work ever. It is intended to both entertain and educate. The events in this story are true, although the timeline was altered to form a compelling narrative. Please find a version with the intended formatting here. (Edit: fixed a tiny typo and updated download link to fixed version.) 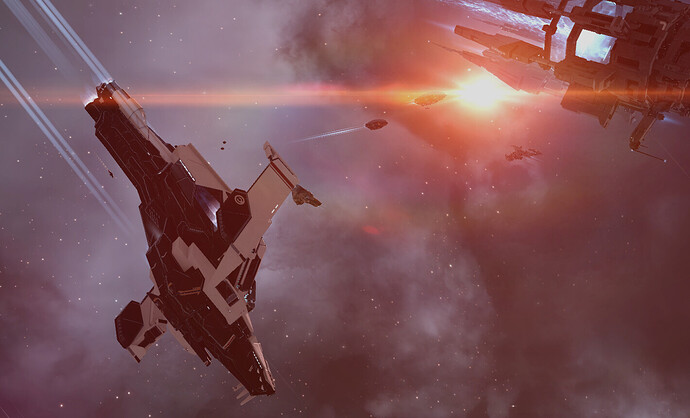 Ever since the fall of Niarja, the Uedama system has seen a significant increase in the numbers of a specific kind of criminal. Calling them pirates would be an overstatement, for they never spare a victim in turn for ransom, nor do they hold their own ships and bodies in any higher regard than those of their victims. Some speculate that they are not normal pod pilots at all, but more akin to the True Slaves of Sansha’s Nation, with no mind of their own worth mentioning. It would certainly make the daily cycle of suicide operations a lot easier on them. The most notorious of these criminals is “Kusion”, so called because all of his slaves log into the communications net with this last name. His tactic is as simple as it is effective: overwhelm and destroy a defenceless - and often equally careless - victim with sheer numbers before CONCORD responds to the incident. While Kusion’s fleet stoically awaits retribution at the hands of CONCORD’s Directive Enforcement Department (DED), one of his associates retrieves the victim’s cargo. Install a new clone; re-ship; repeat as often as possible.

Uedama has not been chosen at random for this type of operation, on the contrary. It is one of a few systems uniquely suited for it. Firstly, the comparatively low security status of 0.6 means a correspondingly slower response time of DED vessels to any violation of the empire’s high-security space directive. Secondly, with Niarja removed from navigable space, Uedama is now part of the only high-security route between all the major trade hubs and as such sees a lot of traffic. Thanks to these two factors, criminals find Uedama quite alluring and big operations have made themselves at home by setting up their very own citadels in the system. These are the perches from which they pounce on their victims. Conveniently, the citadel tethers also protect the criminals while they are waiting for their next victim. This whole scheme is known to the authorities, of course, but the DED’s primary mission is to punish, not to protect. Hence, instead of guarding gates or surveilling known criminals, their vessels only ever arrive some time after the first blow has been dealt. Such is the limitation of CONCORD’s empire sanctioned police force. Private entities are a lot less restricted in this regard.

As many times before, Lari Ksirtanen was found orbiting the Sivala stargate in Uedama. The ship he was flying betrayed his intentions to anyone who cared enough to take note of a ship loitering in the fast lane of this busy and notorious transit system. Most did not notice, most did not care. Lari kept an eye on incoming and outgoing ships, Freighters in particular.

The emissions of an incoming matter stream signified the arrival of at least one ship from the other side of the gate, as happened hundreds of times each hour. Like every time before, Lari’s attention briefly focused on his sensor overview: »Blockade Runner« came the identification. It wasn’t a suitable target. Lari’s attention turned back towards the directional scanner to look for ships warping towards the gate. If any of the incoming ships had done the same, they, too, would have noticed a fleet of 30 Catalyst destroyers, lying in wait not even one AU off the gate.

While the blockade runner cloaked and warped off, two more ships arrived from the other side and popped up on Lari’s overview in quick succession: »Freighter«, »Cruiser«, it informed him. “Here we go” Lari thought grimly. The cruiser pilot was no stranger to Lari. A second later, the cruiser had already started disrupting the freighter’s warp engines. Lari targetted the freighter and waited for the inevitable “One One Thousand, Two One Thousand, Three One Thousand, Four One Thousand… Here they come”. His camera drones relayed exactly what he expected and what he had seen countless times before. Kusion’s Catalyst fleet dropped out of warp in a perfectly spherical formation around the warp-disrupted Charon, placing every single weapon in optimal range. Lari’s Osprey was in for an up-hill battle.

Damage on the freighter started registering and Lari activated his remote shield boosters, bypassing the overheating protection. One way or another, they would not have to run for long. The target’s shields went down quickly and were from then on only ever sustained for an instant by the donated energy, before being obliterated again by the incoming fire. Within seconds, the armour was penetrated and the hull breached in a dozen spots. Lari knew the fight was lost by how easily the structure of the ship gave way. His target lock failed as the freighter broke apart. It had apparently been “triple expanded” for maximum cargo capacity, which meant minimum structural integrity. The pod of its pilot registered only for the briefest of moments on the overview, before being destroyed by the smartbombing cruiser employed specifically for this purpose. Perhaps the most despicable part of the whole scheme in Lari’s eyes, needlessly adding insult to injury. A moment later, a DED fleet arrived and enforced the high-sec directive for the sixth time that day. Not only did they destroy Kusion’s ships, he would also have to wait at least 15 minutes before attempting to surprise his next victim, counting from his last illegal shots fired. This “cooldown” period was part of the punishment and also enforceable by the DED. It gave Lari time to resupply cap booster charges and have the heat-damaged modules repaired. While his vessel performed the necessary maneuvers to dock at the nearest station, he prepared and sent one of his standard post-incident messages, giving the pilot of the destroyed freighter pointers to avoid a repeat of this encounter in the future.

During the next four hours, Lari and others fought against the destruction of thirteen other vessels, two of which were particularly notable. The first was a Kronos marauder. When it was attacked, a significant fleet of mostly unassociated, but like-minded, pilots was on scene, who were ready to provide remote repair to victims and to engage Kusion’s fleet immediately upon its arrival. All in all, the chances of survival weren’t bad for the Kronos, “although”, Jari thought afterwards “this one would have been better off travelling on autopilot”. While traversing the universe on autopilot is not advisable under the best of circumstances, it wouldn’t have hurt for this pilot not to be at the helm in this particular situation.

Kusion’s fleet engaged him in their standard spherical formation, while the opposition repaired him and returned fire. The defensive efforts were going well and it looked like the Kronos could survive until the arrival of the DED vessels. However, the Kronos’ pilot must have been startled by the sudden onslaught against his ship. From Lari’s point of view, the situation came undone in an instant. First, his remote shield boosters shut down and a moment later his target lock failed. Curiously, the Kronos had still been relatively undamaged when the lock had failed. “What the…?” thought Lari, his eyes narrowing slightly. It took him only a second to realize what had happened. “That was ill-advised” he thought bitterly. What had happened was that the Kronos had first enabled its “Bastion” siege module, increasing its defences but also rendering the ship immobile and incapable of receiving remote assistance. Then, it had opened fire on the attackers, validating the whole incident as a “limited engagement” and thus making any outside interference illegal. The Kronos would be on its own until the DED vessels arrived. Kusion had of course expected a marauder to have a proper tank and had thrown in the odd Talos battlecruiser to account for it. Needless to say, even a marauder can’t make a significant impact on a 30-ship fleet quickly enough to matter in this situation. Another wreck, another - hopefully enlightening - message sent to an unfortunate victim.

The second notable incident involved a Rattlesnake battleship. It was attacked and received remote repair like the previous targets. Kusion’s fleet unleashed its barrage, which by all rights should have been more than enough to kill an unprepared target, but to no avail. A couple of tense moments later, DED vessels arrived and shut Kusion down in an instant. The Rattlesnake never dropped below 20 % shield strength, but what had saved it? Unlike most targets, this pilot either kept her nerves or instinctively did the right thing. She activated her tank and moved back towards the gate at speed, pulling along a bubble of catalysts not unlike a swarm of angry bees. A good third of Kusion’s ships fell behind and their target wandered out of optimal range as it burned towards the gate. They were caught off guard by the mobility of the Rattlesnake, which was taking less damage as a result. The second thing working in her favour was that she had fit a proper tank and was quick to activate it, which vastly improved the effectiveness of the remote assistance her ship received. It may be confidently assumed that this Rattlesnake sported what’s known as a “travel fitting”, including mobility modules and a solid tank, but no high end faction or even officer equipment, which would have only made it a bigger target.

In the end, it had been a combination of the quick-thinking pilot, the fitting of the ship, and some outside assistance which had saved the Rattlesnake from an untimely death. Lari couldn’t suppress a smile at the conclusion of the incident: DED vessels and bystanders tearing through the fleet of criminals, while their former target calmly entered warp with not a scratch on its armour plating.

“Lucky you” Lari thought, smiling inwardly. To the high-sec intelligence comm channel he relayed the following message: “[22:13:04] Uedama gank failed. Kusion on cooldown and expected to resume activities in 14 minutes 30 seconds”. About fifteen minutes later he was back orbiting the gate when he saw a familiar cruiser and an even more familiar name pop up on his overview. “Once more from the top” . . .

Your entry has been accepted under Prose. Thank you!

As a reminder, for others, the deadline remains May 15th!