As most of you are no doubt aware Union Day is less than a fortnight away. For those unfamiliar with the phenomenon, State Workers Union Day is a national holiday during which all citizens of the State set aside their work, rivalries and what-have-you in order to celebrate what our nation has achieved since we declared our independence. A day to reflect upon how our own toil has contributed to the State our ancestors built with hard work and sacrifice, so that future generations might prosper.

It is my belief that this annual celebration should not exclude Capsuleers, which is why I volunteered to organize last year’s Union Day Parade. However, upon seeing that other Capsuleers were also hosting events, and fearing that it would get a bit chaotic, I also volunteered to coordinate with the other event hosts, in order to create a proper schedule so that events would not overlap with one another. After all, it would not be a Caldari holiday if it was not meticulously planned out.

I intend to take up the same responsibilities this year. I am inviting any Capsuleer who is planning to host an event to get in touch with me to organize things properly. This does not mean that I want to have a say in how you plan and execute your event. How you do that is up to you. I simply desire to schedule the dates and times of events in such a manner that they will not overlap.

The Union Day Parade has been added to the schedule.

The Inspiring Works writing contest has been added to the schedule.

Blockquote The Caldari Union Day celebrations have begun! This annual festival organized by the Chief Executive Panel and State Workers Union celebrates the Caldari State and all its workers. The festivities across Caldari space will run until downtime on August 6th.

This is going to be a long event 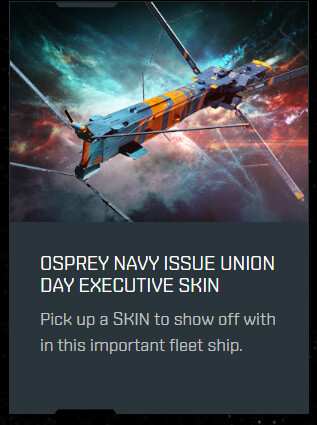 No, it does not look like an Osprey Navy. However, I do not see how this is relevant to the scheduling of events hosted by Capsuleers, for Capsuleers.

The Malkalen Union Day Celebration has been added to the schedule.