For someone who mines 3 hours a day every day ( a noob Venture mines about 1m ISK an hour ) , that is a month away. One then has to ask…how many noobs are going to wait that long.

Players aren’t supposed to stay in Durotar killing boars for months. At some point, they’re supposed to go out into the Barrens and kill zebras instead. So this whole “Venture load” thing is one massive fallacy. It takes 100 Venture loads to make enough for a barge, but it takes less than 10 Venture loads for a mining destroyer and a cheap T1 hauler.

Hindsight is a wonderful thing…but the average noob has no idea what ‘progress’ even is. You get 15 minutes of epic space battle with an Astero, and then dumped in a station with a bunch of ‘agents’ and 5K ISK. Welcome to Eve.

You get 15 minutes of epic space battle with an Astero, and then dumped in a station with a bunch of ‘agents’ and 5K ISK. Welcome to Eve.

CCP is in the way of player interaction . One, with the new player experience and two, with stealing a march on the player market. Like any tyrant; It thinks it is helping, but it is not.

Markets are messy and chaotic until they find their efficiency. With CCPs constant interference, we the player market will never find the best ways to compete or collaborate in welcoming new players into the game. 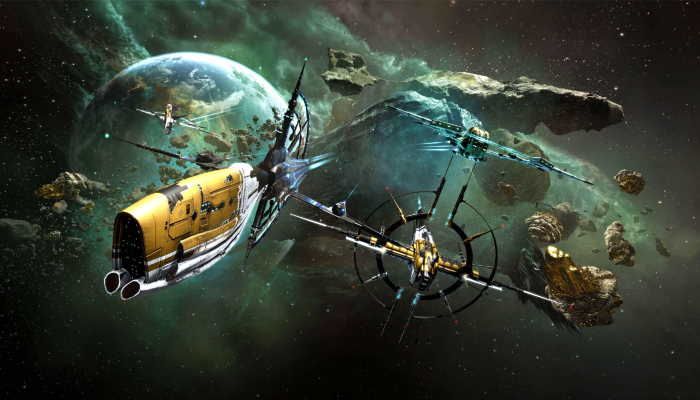 EVE Online's dev team is no stranger to controversy. We sat down to talk about the response to the Prospector's Pack as well as the learnings from the recent Free For All event that took New Eden by storm late last month.

Information only.
I guess this method of communication keeps media relevant.

The issue is the null blocks that control the CSM despots were upset their own income would be reduced by competition from CCP. If it was anybody else, they (the CSM despots) wouldn’t care.

“They work for us”, no they don’t. CSM is duplicious when it comes to claiming to represent “you”.

I have no problem with CCP breaking new ideas into the game and disruptive ideas too, just not political narratives (the game is also PEGI 12 remember).

Korea (Pearl Abyss location) are big on NFT’s, can’t wait for more of those.

People made a huge uproar about DLCs in game markets, they’re here to stay, so are gold tokens, crates and packs.

“They work for us”, no they don’t. CSM is duplicious when it comes to claiming to represent “you”.

Are you talking about CCP Kestral?

Nothing can prevent what you see as corruption. Disbanding achieves nothing.

I’m more concerned about the last paragraph of that article which suggests to me that CCP is pleased to provoke its players without moderation.

The “mistake” is not forgiven by me. Nor will it be any time soon.

The game is 20 years old, more of the same old won’t sustain into the next decade.

As for player feedback, still waiting on a survey from CCP, CSM won’t be getting it.

This game could last two thousand years if its developers understood it’s founding. They clearly do not.

Personal relationships are greater than equal to anonymised data. That is not opinion. I’m not debating with you because it is fruitless.

Please cite an example of a computer game that lasted 2000 years.

That’s not a computer game, unless you’re referring to the simulation hypothesis.

Once something exists, it has always existed.
including artificial intelligence, quantum computing and the game of life.

But I’ve been lead astray from the topic. I apologise.

That’s not a computer game

Things are being constantly tweaked…it seems to me without even telling the players.

I know this because when I save my ship fittings I include such things as the DPS in the name. I noticed last week that on a number of ships the DPS had fallen…compared with saved fittings. For example a Gnosis was now suddenly 408 DPS…when my saved fitting said 420 DPS. This was the exact same ship where nothing had changed.

This was the case on a number of ships, though most remain unchanged. The only thing I could conclude is that the strength of the ammo ( Caldari Navy Antimatter ) has been tweaked.

There have been no stats changes any time recently.

You either had a 3% damage booster active (Pyrolancea I), or you were in a clone with a 3% implant and then jumped out or lost it, I don’t know.

Altara has no implants…the damage booster is possible though I’d expect to see that in my Moa as well yet I don’t. It’s not too big a deal…the Gnosis is mainly tanked up for transporting stuff around.

I seldom pay much attention to those gimmicky short term boosters…they are largely just something to be clicked on and gotten out of the way on logging in. I find them useless. They don’t inspire me to do anything today that will require 3% extra damage boost.

You get 15 minutes of epic space battle with an Astero

You lost me here, where’s that epic space battle?

My experience was max zoom out, red dots and lot’s of overview red lines.

Apparently miners have epic space battles in HS. So miners say when you start saying you want to add more risk to mining.

My experience was max zoom out, red dots and lot’s of overview red lines.

So Pearl Abyss did purchase CCP with the intent of destroying EvE.
I was right the entire time.

am here to admit that I have been knocked off centre over this. I find it painfully unfair to change the fundamentals of a well loved game system nineteen years down the line.

A great deal has been said on the subject, there is no point repeating it, and there is no hope that any words written on this forum will dissuade Seep (CCP) from doubling down on this disaster.

This won’t stop and we won’t see positive changes in this game occur until there’s a leadership change at the highest levels. Things like what we’re seeing now start at the top, sadly.