According to a recent r/Eve post mass recruitment spam is now punished by CCP. Great news if ture 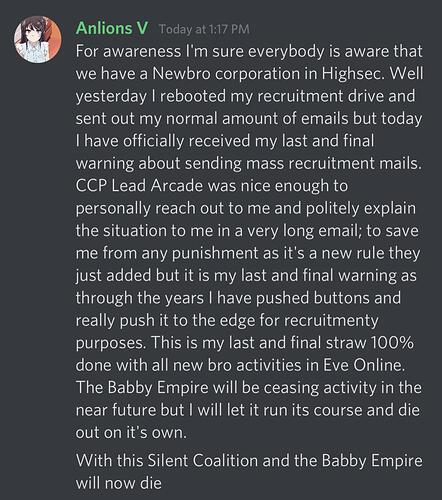 Now if they can also shut down all of these faceless 30,000-member high-sec tax shelter entities by force…

Every time I receive one of those email I report them. People have gotten so lazy they go through each systems and just mass mail everybody in local.

And that is one report on each char.

It seems reporting these were not in vain afterall.

The worse part, if you happen to be traveling on the same path they are.

I know I should not be spamming the report button, but if they are going to be lazy and send me that mail each time I am in system with them. I will report it each time as well.

Pretty similar with hypernet spammers in local though you can conveniently block them but they constantly biomass and create new alts to get around such blocks. Maybe if enough people complain about this CCP will eventually do something about those too. One can only hope.

The corporate recruitment spam actually hurts the players it targets.

And the world rejoiced. It had been fairly quiet for a while but it started to pick up again.

Let’s hope it stops the influx for those crap newbie trap corps.

CCP getting rid of junk mail peddlers… Wonder why it took so long. Better late than never but I’m thinking these dubious spammers have had a hand in player reduction by sending newbros to crap corporations where they’d quit so I think a year ban for those junk mail pushers wouldn’t be over the top.

This is Indeed good news.

Let’s hope it stops the influx for those crap newbie trap corps.

Yup never heard of this babby empire but know very well from first hand experience also how useless and teach nothing to their recruits the silent coalition is. So my response is the same, let me cite a classic to express it though:

I think I received 3 spam emails from them, all cause I was in rookie help. No doubt an isd or a gm ot one as well

Just make any corp with more than 1000 chars not wardec immune. A group with that many people has the manpower and should have the brain power to defend itself against wars. No group with 30k chars should ever be allowed to be war dec immune. That would solve some issues.

This is bullship. My corp can’t survive based upon the strength of my community, culture, benefits, and game play opportunities. Thus, babby and SiCo will die without the ability to spam the player base with recruitment ads.

Fook newbros. I’m done with them.

I noticed players in those two corps / alliances think they are all that.

They provide none of them and rely on refilling their numbers with spam recruitment as people who realize their alliance is junk, teaches them nothing and exploits them constantly leave. So no wonder the guy made such a huge drama as it will definitely kill his alliance. Also telling he rather quit than actually put in the effort to make the alliance a worthy place for rookies to join thus word of mouth would probably achieve what recruiting EVEmails do now.

Rightfully so as unfortunately many who join them might think this is the standard in EVE and quit entirely while some might move forward from such a bad corp / alliance. The damage is already done by this point so the more such alliances are harmed and forced to refrain from bad practices the better. No we are not talking about established players being scammed / exploited here who should know better and have all the opportunity to recover.

We are talking about new players entirely exposed to such bad actors when they join them for whom it is difficult to recover from such a position and might lead them to hate the entire game thinking this is the norm. I fully endorse the sandbox including ganking, scamming, mindgames, traps and every other negative act within the game rules but not in case of rookies, they should grow into worthy opponents first which results in more fun anyway than clubbing seals.

Let them grow, become worthy opponents and then it is a good time to compete and let the better win. This is what EVE should be about.

so the eve equivalent to the car warranty telemarketer assholes got told to STFU and he just cant handle it? yawn

Yeah I’ve upped that one as well a pretty funny way to express it and completely true at the same time.

I noticed players in those two corps / alliances think they are all that.

To me it seems the other way round, players who’ve been playing for a bit and thus should know some of the basics and shouldn’t need to ask about those basics (partly because they figured it out or because they saw someone else ask that question and read the answer). When I see someone ask basic questions and I go “wait a minute, you’ve been here for a week, you should kinda know this” and I check them they’re pretty much always part of one of the crap corps.

And quite a few others.

Ive seen that too. Some get coddled and others abandoned