While retroactive recruitment is nice

The insane levels of spam being generated by it are not. Surely it must be against the rules to spam evemails with recruitment links? Noone is being recruited by these people, they are just farming rewards from as many random players as possible.

This is getting out of hand. 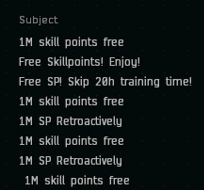 Think of the children!

According to a recent r/Eve post mass recruitment spam is now punished by CCP. Great news if ture General Discussion

This did happen. Fyi @CCP_Arcade

A hundred people in a crowded system doing what CCP asked them to do all post their link once.

Looks like spamming, but it’s not. The only systems being spammed are the systems already full of spam bots. I hardly ever see links posted in normal systems. One every ten minutes or so.

Anyways, like everything else CCP does in this game, no one will be recruiting in another week because everyone will have gotten their million SP by then. So if everyone would just pull the sticks out of their asses and be patient, it will fix itself without the need of y’all clogging up the report queue.

Rookie channel gets spammed too, quite often.

I thought Rookie chat had mods? Mods who can block, silence, or ban spammers.

Though it’s been a decade or more since I’ve visited, so it may well be a free-for-all now as far as I know.

They spam mail the people in chat.

Only so what should happen is;

Give access to elected channel monitors for local and that Capsuleer monitors the amount of spam and has the ability to clear !mute the pilot spamming for 10 minutes.

Just ignore it unless it is Code. or Safety in local nothing else really matters while mining in Highsec.

Should be able to report it. Im glad SiCo and few others stopped doing it.

Oh no! People are getting free stuff. Quick stop them!

This “spam” is there to inform those who don’t READ the news. Personally I clicked a link and got the 1 million Koopa coins or skill points. Why complain about it?

The spam is there for people to harvest recruiter rewards without having to actually recruit anyone.

I complain about it because I’m getting far too many mails about it and there should either be a penalty or a very high cost to annoying thousands of players just to exploit the recruiting system.

If the end result is for everyone to get the million SP if they haven’t had it in the past then they should just flag any account that has no recruiter as being recruited and drop the million SP in their rewards system with no expiry.

I complain about it because I’m getting far too many mails about it and there should either be a penalty or a very high cost to annoying thousands of players just to exploit the recruiting system.

That’s been a problem since long before this latest ill conceived plan of CCPs. The fix is easy.

I woke up this morning and saw that thanks to five of my seventy recruits buying game time, my Omega set to expire in January is now expiring in May.

Cannon fodder gets pricier when your a ■■■■