The never before killed suspect bait Nereus fit of @Adrian_Vexier is up for sale!

If anyone wants to know his fit I’ve just baited him into trying to bait me just so I can scan his fit using my main char (yes am too lazy to switch characters just to post this and reply to potential posts.) I have a nice screenshot too.

but as a compassionate capsuleer I still gave him a 10 minute time frame just in case. As it has passed, the fit is up for sale to anyone and everyone who offers a nice sum for it.

(The ISK people pay for the fit will go to a new giveaway fund as personally am not in need of ISK and will be given away at a later date if a reasonable amount is gathered or just going to be added to the existing rookie kickstart funds if too small amount for a separate new giveaway.)

Send your offers in EVEmail to my main @Marcusson_en_Chasteaux and we can discuss the rest. It may take some time to get a response as I’m usually rarely signing in so patience might be required.

The fit is sold to anyone who offers a suitable amount of ISK but if you want an exclusive deal that can also be arranged for the right price so will wait a bit before accepting the first offers to see if anyone wants an exclusive deal in which case I will only sell it to one single person.

In order to get somebody hooked, you have to tease a bit what is so special about a battle Nereus … is it full officer fit?

Also why didn’t you kill it??

I specifically went there to scan him nothing else, was mainly just curious of his fit but after unexpectedly succeeding thought some (he himself or others) might pay for the intel and as he didn’t want to pay more than 500 mil I was not interested. He seem quite successful with that fit so it might have value to some hunter who wants to kill him especially as he has some youtube channel on which he posts EVE videos so that might further encourage hunters to get him. Never done such before so a fun new thing to try basically, no matter either way it is the journey that matters not the end result. As for the fit no officer stuff, has abyssal stuff and that’s all I’m willing to reveal.

As he surrendered his fit in another thread here is the related screenshot of one of the scans and below it the quote of his related post. 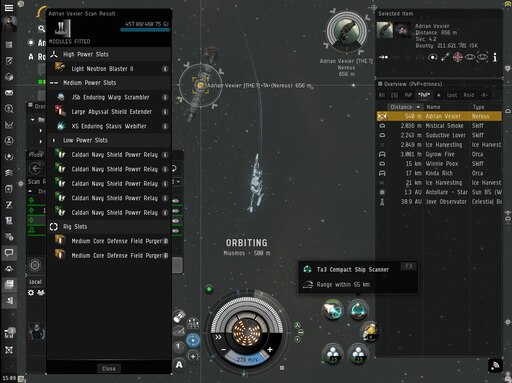 I didn’t want to pay more than 500 mil.? Little boy, all I would have paid you was the blade of my sword.

What is the point of this fit?

I mean…but does it? What dps? What class of ships can it take on?

By the way these are called armed merchants in old naval parlance and I’m all for it. Haha just want to know how effective

I mean…but does it? What dps? What class of ships can it take on?

By the way these are called armed merchants in old naval parlance and I’m all for it. Haha just want to know how effective

Follow the links above for his killmails, or check out @Adrian_Vexier killboard:

Follow the links above for his killmails, or check out @Adrian_Vexier killboard:

Buggers…I dont want to be lazy but also dont want to leave it to my interpretation lol. I guess I’llsee what I can make of it

Was it speed tanked?

Battle Badger, Gallente edition so nothing new Nereus has 3 light drones bandwidth with 30 m3 bay, I think as I was looking at industrials yesterday, Minmatar got one wasted on massive special ammo bay in my opinion.

Well as you can train into any race’s industrials with ease even as alpha I think it is not wasted, not sure how often it occurs though but if you want to haul a lot of ammo it could be useful, other types of specialized haulers are handled by gallente (planetary commodities, minerals, ore) and the rest are regular (cargo) haulers so imo the variety is more preferable with the ammo hauler than yet another regular hauler.

You can fit even large ammo of 2-4k m3 of what you might use for a month in any industrial except those PI/mineral/ore gallente. The minmatar I mentioned is 40k special bay for ammo, excessive to carry that amount except to market for T1 (or XL ammo I guess) and dumb as hell to carry that much faction/T2 ammo when the tank on T1 industrials suck, T2 at least you have better odds. Just makes the industrial look less appealing.

there is a video on youtube floating around of like 7-9 guys in haulers gate camping, people open fire on them expecting them to be easy and get owned, even a drake died to them