All is too much expensive

And that not all, the gain of isk in game have been reduce in all activity… Relic/Data give 1b easyly in somes hour of game there is 2 years ago… now i prefer turn around a rock for gain isk…

I don’t know what doing Devs in eve online, but they don’t realise they are killing the game.

Personnaly, farm for money, is boring for me… i don’t spend real money for turn around a rock and kill boring npc. I play for PVP…

That the real problem of an expensive virtual life game…
Price have double and the gain been reduce in farming activty.

Impact in game:
Now for buy a simple heritic, i need 3X more time for farm.

Devs don’t realise they are killing game, and they don’t see the number of players who leaved the game because they are boring to lose their time to farm…

I m in providence, and i can told you the pvp in game is rather dead compare to 3 years ago…

So wait… You are blaming the devs for expensive items that players put the price they want in the market? All I see is you comparing prices of certain time frames and not even developing a proper argument to back it up!

m8, times change, so does the market, you didn’t even properly make a statement against the devs that is legitimately ruining the economy when it is the Players themselves that put up the prices. And it works just like how it should, if there is more supply than demand then prices will start dropping, but if people start blowing up ships and demand more of them then prices will go up because of the sudden demand!

Now one thing is for sure, you cannot say “Oh I don;t know whats going on but the game is dying” when you can perfectly do some research and learn about what happened so that you can form some sort of legit argument. There are quitters, there are people that don’t have any more time to play, there are people that take vacations, that’s the life cycle of MMOs, so no, the game isn’t “dead” and I hope it will never be because its one of the few that give this kind of experience, and for the game to be up and running after 20 years then it means CCP is doing a pretty damn good job despite some flaws they make every now and then.

2 years ago, i was doing 100 to 250m with true sansha in simple belt… true sansha loot have been reduce.
Gain in true sansha are more rare so it’s normale the price of module increase. Problems is devs patch, not the price fixed by players.

When you farm in relic /data, you gain ressources for craft rig t2… If you reduce by 90% the gain of ressources in relic/data, the price of rig t2 will increase by 80%… It’s a problems with a devs patch, not the price fixed by players…

And all things are like that in eve online, price increase, because devs want up the price.

Now, the probleme, it’s the impact in pvp game… The pvp game is ■■■■… More rare, players get more scare to go out with expensive ship etc etc
That why, only rich players with their old account can play pvp with expensive ship… The new players stay in station.
The pvp is dead compare to somes years ago…

5 years ago doing high sec anomalies netted me under 100m, and non the same activity nets me 3x.

You are exaggerating, relic/data sites are the same as 2 years ago (Sasha relic good, data still crap). Also things change, meta changes, ISK sources based on loot getting more popular means everybody gets less, ships got buffed, became more popular and prices rise. But also a lot of stuff is cheaper than 2 years ago.

The only inflation happened for PLEX and associated services, because demand sky-rocketed as explained.

Gonna have to agree with the OP.

Everyone who says Market prices and loot rewards are still the same today compared to a few years ago is just talking BS.

Years ago making 75 to 100 mill ISK per hour was easily done even in high sec. Over the past few years every aspect of ISK reward has been nerfed by CCP in one way or another, from reduced loot tables to reduction of site spawns to implementing game mechanic changes that ultimately made specialized business opportunities obsolete.

Gonna have to agree with the OP.

Everyone who says Market prices and loot rewards are still the same today compared to a few years ago is just talking BS.

Years ago making 75 to 100 mill ISK per hour was easily done even in high sec. Over the past few years every aspect of ISK reward has been nerfed by CCP in one way or another, from reduced loot tables to reduction of site spawns to implementing game mechanic changes that ultimately made specialized business opportunities obsolete.

Can’t argue that your correct on all accounts, but it’s also caused by other serious issues such as massive isk firehoses that CCP added and did a ■■■■ poor job of fixing, such as capital and super capital ratting, which prints most of the entire game’s isk supply currently (According to CCPs own metrics) and having more bajillionair nullbears leads to massive inflation. (Just like real life, the more money there is, the less money is worth.)

(According to CCPs own metrics) and having more bajillionair nullbears leads to massive inflation.

The CPI says otherwise doesn’t it? 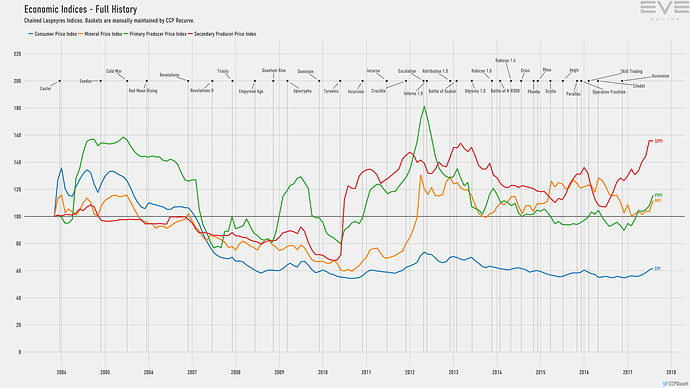 I’m no economist, so may not be reading that right, but I thought percentage change in CPI was a measure of inflation?

hi Im an economist. Factors are these and it’s happening even in real life:

there could be more but these are what kills us even in real life.

You are reading it perfectly right.

You know that if loot chance is reduced price is rising?

It seems increasingly obvious that we simply aren’t teaching our children even the basics!

Nearly all people who play EVE are in the top 5% of educated people in their countries - but they don’t understand basic economics.

Too much, mostly ‘free’, isk flows into the game - and thus EVE is a model of a hyper-inflationary economy. You then blame the Devs for trying to keep some lids on it - whilst not playing the game.

and thus EVE is a model of a hyper-inflationary economy.

Except it’s not, because there is no hyper-inflation.

I remember when Raven cost was 80 millions.

Raven was around 76mil, absolution was 114mil and Armageddon was 36mil, dominix was 48mil.

Those were real prices, now it’s not worth buying t-1 ship anymore.

You could always… sub

No, what kills us in real life are economists who think they know what they’re doing, and the politicians who make policy based on theoretical fancies that have absolutely no bearing on real world situations.

It takes a human being to really screw things up.

The problem is that not enough liquid ISK is being burned. Go entosis something without permission