just a suggestion that CCP do a ALPHA run in-game EVENT to release another 500 Blue Prints of the ORE VENTURE… to date I’ve keeped an eye open for em in the store, but no 1 is selling em…not in the last 2 years or so… i know this idea will be shot down FAST from the OMEGA players cause its their money pit, they don’t want 2 loose it…but its about time ALPHAS can get and produce their own…

I don’t know for sure, but I can only assume those prices are for a bpo.

Also, there’s probably a lack of people building them, since players can get acess to 2 “free” ventures through the career agent missions in the rookie systems. 2 x 3 x 4… that’s a total of 24 ventures a player could earn by visiting all the career agent locations.

But even if you don’t want to do that… 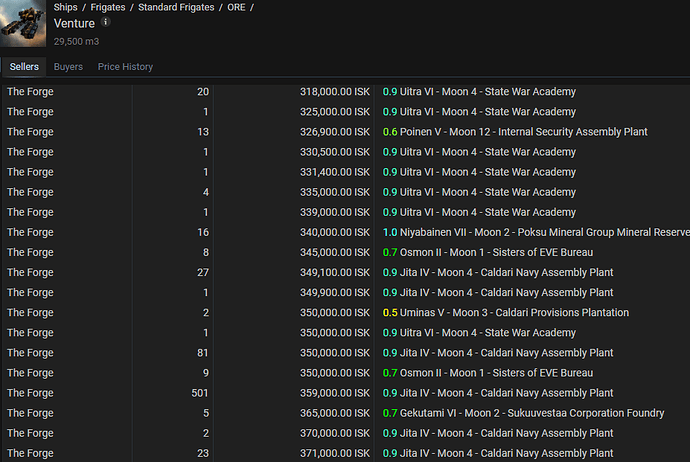 How does this have anything to do with alpha vs omega?

“Think of the children” is always a bad look for an argument. It’s even worse when it doesn’t remotely apply

A Venture BPO is 7.5 million ISK in Jita. You can earn more than that by just doing the career agents, not to mention they give you two Ventures for free…

Blue Prints of the ORE VENTURE… to date I’ve keeped an eye open for em in the store, but no 1 is selling em…not in the last 2 years or so

I bought one not two weeks ago. Wasn’t expensive, I forgot how much so it must’ve been cheap.

This idea has 0 justification and therefore 0 merit.

Your reasoning (it is too expensive) is nonsense, I made a new alt recently and was able to get 2milions by making just few career missions + project discovery and collecting all AIR bonuses. Venture costs 350k, if you want to cut that down, you can buy 10/20 blueprint copy from contracts and manufacture it yourself. No need to buy blueprint original for that.

No need to buy blueprint original for that.

This could really be put into the industry agent.

Unless you’re at the point of doing large scale production BPOs are almost never cost effective.

Numbers are nearly half a decade old but back when I ran a training alliance it would take well over a million retrievers before the little extra profit you saved on each one payed for the bpo.

Contracts needs UI overhaul mainly. Something in a style of hyperscam browser.

Good god no. That thing is a pain to find a specific order. At least the current contract system can be properly filtered.

I wrote “something in a style of hyperscam browser” and you instantly assume it would work the same way as that browser works now. Which is really stupid. Honestly, all these new UIs are stupid, but this browser has a potential. It just need to fix bugs and use “pages” not some crappy randomized offers.

If that was the case, it would be actually useful and improvement over current contract “browser”.

So… by in the style of you mean nothing like?

Only thing the current one needs is for it to be able to pull based on similar rather than exact and to have common shorthand added.

I am a free player, 2 weeks in and still alpha. I still haven’t finished the career agents, but I’ve managed to put together quite a good amount of money from focusing on mining and trading and getting the beginnings of a manufacturing supply line in place. My (small) corp has been helpful in providing many of the resources I need, and I’ve also managed to get hold of a few surprisingly good deals where I was able to buy items at less than half the price I’ve sold them on for, which has given me a lot of funds to work with.

As a result of all the above, I own a Venture BPO and have it set up in one of the NPC research facilities in hisec space near a starting area. Because I’m alpha, it’s going to be a while before it finishes the material and time efficiency resesarch, but once I’m done with that, I will be making and selling Ventures and Venture BPCs in my local (Caldari) starting region. I can’t say for sure I’m alone in this, but even if I am, I doubt it’ll remain that way long-term. It’s not as hard to get hold of them as it sounds like it is. Take a shhot, you’ll see. In the meantime, I’m producing cheap Caldari weapons and ammo to keep other new players supplied with the weapons they need to murder my mining ship while I’m out collecting the resources they need me to collect to make more of their ammo.

All is as it should be. Fly safe, but not too safe. Risks can be worth the rewards if you’re careful. o7