Any standing to prioritize? Like Sister of EvE... couple question

Standings have several uses depending on what you are doing.

If you are a trader, you want really great standings with the faction and corp running trade hubs to lower fees.

If you are an explorer traveling through low or hisec youll want to not have negative standings below -5 to avoid empire navies from chasing you.

If you want to run missions or epic arcs, youll need decent standings with either the faction to access all corp/agents or you can do certain corps. The standings has to do with what level agents you can access.

Sisters of eve arc (as well as all arcs) can be repeated every 90 days. The sisters arc can also give standings for each faction (but only one per run)

but… it’s any other good corp for standing where you can spend LP and get good ISK??

I dont mess with LP so i cant answer that one.

I was just giving a broad overall explanation of what standings are for.

As far as #2. Its good to have an idea where agents are at for the corp/level you are doing. You can decline the same agent once every 4 hours. Penalty for declining a second mission in the 4 hour window is a small standing loss to faction and a bigger standing loss with that agent and corp.

Running 16 missions for the same faction and same level will give you a storyline mission which will give you faction standings, but also give negative standings with another faction. (They can be declined without penalty).

And Concord can be exchanged for any other lp.

hmmm i test this Thukker but they give much less LP for mission and crap loot from npc.

but they give much less LP for mission

LP is determined by security status of the system you pick up the mission not the faction.

and crap loot from npc.

All loot from npc’s are crap unless its tag’s imo. 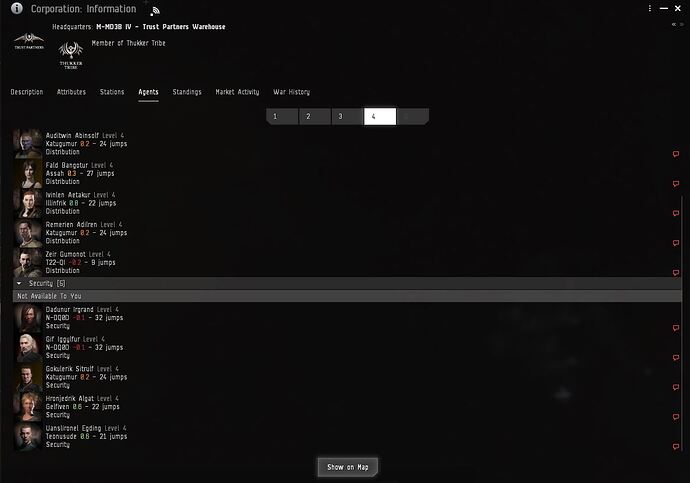 Abandon looting abandon salvaging work on completion speed and blitzing and let it rain in lp.

Make yourself a spread sheet and track everything it will help you in the long run.

any sugestion about ship for L4 to finish THIS fraction mission?? Now im fly drake L3…

What ever ship you find fun to fly tbh, if you like the drake then Navy drake → night hawk is great against guristas/serp/caldari/gallente/mordus/merc’s

Assault frigs/stealth bombers can do them as well but they require manual piloting. And are good at getting passed gate camps in nullsec.

Some people love marauders, Golem is amazing as it can use any damage type and has target painter bonus so it can project down well.

nah… High Sec mission L4… Trust Partners or other fraction BUT high sec. Got drake, it’s PancerDrake but slow like hell… got raven Fit but still not enaught skill for all parts of fit… sooo still L3 mission runner.