So I’m doing missions for Amarr Emperor Family but only my Corp standing (and Agent) are going up, not my overall ranking with Amarr. Is there a reason behind this or something I can do to increase my Amarr standing? 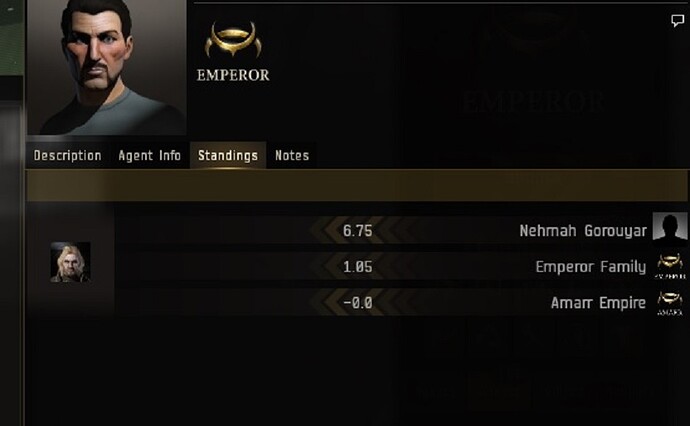 To raise faction standings, either do the epic arc for amarr , or for every 16 missions of the same faction and level, complete a storyline mission.

The soe arc can offer amarr or any faction standings of the 4 empires as well.

Well damn… it seems like you’re pretty limited to agent missions for a while as a new player. I went to enlist for faction wars to try something new and i got rejected because i have zero standing with amarr.

Do a storyline mission for amarr and you can enlist with the faction warfare. Standings need to be 0.00 or higher unmodified.

Awesome, thanks for the advice!

Sisters of eve arc is a level 1 arc, and if you havent done it, i suggest you do it. Its rather long with lots of jumps, but you can gain amarr standings after about 3 or 4 hours

So I accepted the storyline arc from an agent nearby and did the first task of mining some veldspar but once i completed it kicked me out. I think it was “Mine 1000m3 veldspar and return” so I did exactly that and got back and the agent changed to this… 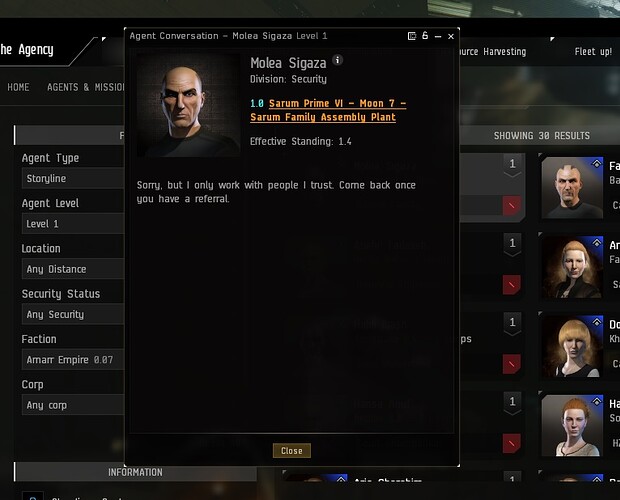 I’m pretty sure I didn’t do anything wrong. So… now how do I get a referral? If you notice in the background on that screenshot, all of the storyline agents have that red symbol signifying I need a referral.

The good news is that the one task I did on that storyline bumped me up to 0.07 Amarr which get’s me into faction war lol.

Storyline agents, as i mentioned above, are only given access after every 16 missions for the same faction (amarr empire) and level of agents (level 2).

They are chosen by closest agent to you.

If you ever decide to repair negative standings incurred from doing Faction War, check out ‘The Plan’…

Also the Career Agents for a faction give a faction boost when you finish the agents last mission. Try a set of Amarr career agents, should help.