Any update when the "Plex for Good"is going live?

They will accept plex now through the player ID they mentioned in their announcement. I sent them some PLEX yesterday through a contract.

I’m still awaiting this too, and today is basically the last day they can announce it this week. Even if they accept it, there’s no assurance they’ll give it to or even the possibility of confirming which charity they’ll give it to.

Given the way CCP has been letting this develop, it doesn’t seem like this is being done completely willingly or with the full support of everyone in CCP. I’m not just talking about with which posts and comments they’ve let slide, but about how they’ve tried to be apologetic in the Russian forums about not accepting payment in rubles blaming it all on their payment service provider while keeping silent on any official stance elsewhere. I don’t think it was simply a coincidence that they announced this a day after Pearl Abyss’ act of solidarity, Until there are more details, people might want to stick to other charities.

i have chosen to donate thru other means (orgs) as i believe CCP to be incompetent and corrupt.

You can give to the Ukraine’s armed forces directly.

Its in english, clear instructions, many currencies, PLEX is not required.

Ye. I can’t wait to donate cash to a corrupt goverment so Zelensky can send it to his offshores.

There are better ways to help.

Like giving cloths, food and jobs to refugees.
At least thats what I did.

About the governments, there was always a lot of propaganda. If you are not sure what is truth, just give to people directly, they also need it.

The thing you are writing about was 2012 and was not about any govenment funds. The whole thing is unclear and there is no proof that Zelensky was included. Even if it was, it was common practice to transfer offshore to protect the assets from seizing by thugs in government installed by russians. After 2014 things changed.

You should also hear yourself actually, when Zelensky is in Kiev and the russians are so near, do you really think he is gonna get some central bank money that are there to support his own troops and his own security and offshore them? He refuses to move, when he had many opportunities. I wonder what you would do…
Zelensky is supporting his words with his actions.

I understand your sentiment. I don’t trust corporations either. I sure as hell ain’t gonna buy PLEX to give it away. I can barely buy any for myself.
I never fail to help the poor souls God puts on my path, sometimes even when I barely have enough for myself and I do it consistently throughout the year, I don’t have to wait for Christmas or a manufactured conflict then put my virtue on display online.
I was homeless for many years, I know what it’s like to need help when help is reserved for others. There are millions of people in desperate situations thanks to the evil morons other morons voted for. I help them.

All help is needed.

I also decided to make a donation. 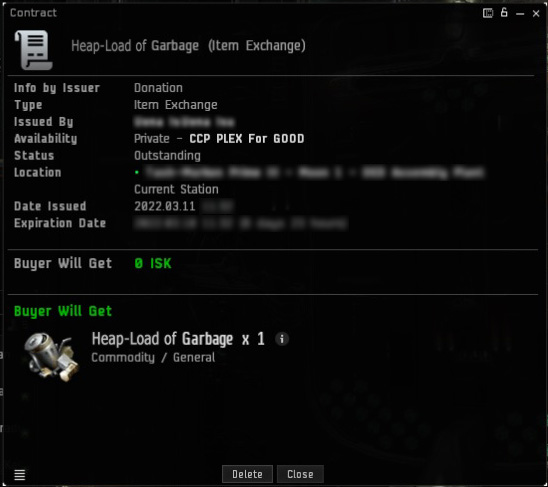 if ccp makes the plex why not just make infinite amount of plex for them so they have all the money they need.

I only donate to my regional Red Cross directly. At least I personally know that the Red Cross really helps people.

I only donate to my regional Red Cross directly. At least I personally know that the Red Cross really helps people.

We know they’re not as angelic as you make it out to be. A little search and reading is revealing.

Yes indeed, I totally ignore that, like it never happened.

We know they’re not as angelic as you make it out to be. A little search and reading is revealing

Quote me where I said they’re “angelic”. Never mind, you can’t.

I simply said I personally know that they help people and it is true that they do
I’ve ever only given money to the Red Cross ( or rather la Croix Rouge ). No other global organization helps people as the Red Cross does.
And then again, it’s my money so I give it to whomever I wish.

And then again, it’s my money so I give it to whomever I wish.

Sure, absolutely you can, except when the banks, payment networks and state says you can’t.

You’re better off handing the people your money directly, than via a wasteful organisation.

No other global organization helps people as the Red Cross does.

xcept when the banks, payment networks and state says you can’t

That’s right. If they say I can’t then I can’t. No need to argue with a totalitarian state.

I don’t know, I’ve never traveled to Haiti to check.

You’re better off handing the people your money directly, than via a wasteful organisation

I do that too.