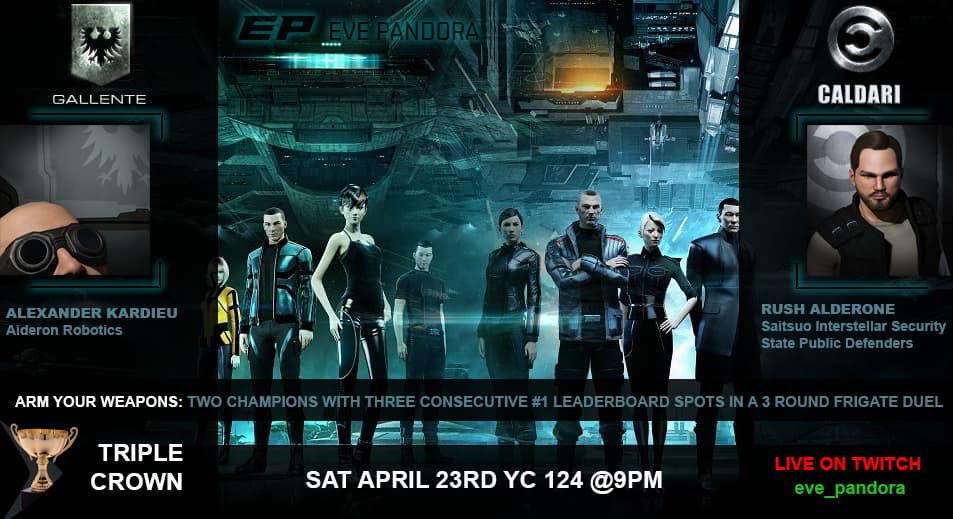 Alexander Kardieu and Rush Alderone face off in a 1v1 3 round frigate duel this coming Saturday 23rd April YC 124 at 9pm in the Arm Your Weapons: Triple Crown.

Both of these competitors have placed #1 in three consecutive Arm Your Weapons campaigns for their factions during January, February and March and in doing so will fight to claim a bonus reward. A winning round is worth 5 points and second place is worth 3 points with a reward of 100m isk per point. A maximum 1.5b isk reward and a minimum 900m isk reward is possible.

A 1-day campaign titled Triple Crown: Killing Spree will become active on the Saturday at 00:00 and will run until midnight for all 4 factions where kills against Caldari or Gallente faction capsuleers will add a further % top-up to the reward for these two champions.

All of those fighting for the Gallente and Minmatar militias are encouraged to engage capsuleers of the Caldari militia.

All those fighting for the Caldari and Amarr militias are encouraged to engage capsuleers of the Gallente militia.

The additional bonus will be decided upon the kill/losses difference for both the Caldari and Gallente factions at midnight.

All reward claims are issued once the 7 day claim deadline ends which is after the campaign end date. All standings gains and losses for kills are also applied at this time. Kills are calculated every 3 hours. Starter ship kills do not count.

This reward has been further increased with the final result from our campaign Killing Spree The final results of this are 411 kills for those fighting against the Gallente and 272 kills for those fighting against the Caldari. This results in a 60.2% to 39.8% sway in favor of the Caldari and their Triple Crown champion Rush Alderone.

With these additional % bonuses, the final reward for these two champions are as follows:

Congratulations to both Triple Crown champions.

For those who took part in the Killing Spree campaign, rewards can now be claimed on the campaign itself at https://evepandora.com/eve-online-pandora-campaigns/triple-crown-killing-spree/