Why do a lot of people say use EMP against shield tanked ships? Often times players in PVP will attempt to cover the natrual shield hole of EM or the natural explosive hole of armor (which is oddly less of a hole than EM is for shield). Sometimes a single EM hardener is enough that when dealing omni damage (a 25/ 25/ 25/ 25 profile), they would take less than 25% of their damage from EM post resist. Sometimes a single hardener is not quite enough to cover the hole. Attempting to dig through zKillboard and hoping the fit you’re facing is one they’ve done before is a good idea, but it doesn’t seem that shield tank automatically means EM is the best damage to use.

It took me less than minute to do your homework. I opened all losses on first page of zkill. From about 30 losses only few tried to plug EM hole. Or explosive in case of armor.

Now even if they plug the hole does it matter what damage type you deal? No. So it’s better to just go for it and hope they didn’t. You can only win and lose nothing.

I opened all losses on first page of zkill. From about 30 losses only few tried to plug EM hole.

Huh… I did do that last week, but I kind of ignored mining ships (because they’re not PVP equipped) or anything besides logi without scram or point (since I assumed they were PVE ships) which left me with 3 Jackdaws, 15 Drakes, 3 Ravens, and 6 Basalisks,1 Hurricane Fleet Issue and 10 Thrashers, with the hole covered in all but 3.

Ordinarily, I would look up the corp we’re fighting rather than just “try to find shield ships” but last week I wasn’t thinking “how do we beat X” but “is the advice of EMP against shield tanks good?”

I didn’t realize so few people even bothered to cover the natural hole in their resist profile. I guess I should have just waited a week before checking the killboard again.

You don’t shoot emp because your opponent might be shield tanked. You shoot it because the role of the suicide Thrasher is to do what the suicide Corm/Cata cannot, and that’s inflicting EM and EXP damage types, as well as doing high alpha damage.
Likewise, the Tornado does what the Talos can’t do.

You shoot it because the role of the suicide Thrasher is to do what the suicide Corm/Cata cannot, and that’s inflicting EM and EXP damage types, as well as doing high alpha damage.
Likewise, the Tornado does what the Talos can’t do.

Well fine, so I guess the common advice is right for the wrong reasons then.

Or as Kitty pointed out, some people really don’t cover their holes. I guess it depends on the corp. I must have chcked the killboard right after a few good corps lost ships in quick succession

It depends on what you intend to fight. If you undock to fight NPC, you will shoot the damage they’re weak to, and tank the damage they inflict. Or you go general purpose with multispectrums, but shoot the munitions the rats are weak to.
If you want to gank a ratter, you can expect him to have the ammo loaded he intended to use on rats by the time you land on him. You can also expect him to have a tank that’s good for the rats. And you use whatever munition will penetrate his tank, and the tank that will perform well against his ammo.

If you want to gank a ganker, or are baiting the gankers to come for you as part of an ambush, you do the opposite of what they expect, namely tank what the rats don’t inflict, and shot what they’re good at tanking.

In null most doctrines use omni tank and don’t really bother about damage types because half the fleet will not switch ammos on fc’s orders anyways as new orders are given before all alts were alt-tabbed to, and a significant weakness would enable their enemies as well as roamers to obliterate their CTA fleet, as everyone and his dog has spies in the large null alliances and would therefore be aware of the weaknesses.

Suicide ganking doesn’t have this problem, as the ganker ship-scans his targets when they pass through stargates

Thrasher is to do what the suicide Corm/Cata cannot

Makes sense. If I was specifically wanting to protect myself from hybrid I’d plug thermal and kinetic. So using the projectiles that hit other resistances is a plan.
Emp, Fusion, NOT phased plasma. And Quake/Hail.
Noted.

Now even if they plug the hole does it matter what damage type you deal? No. So it’s better to just go for it and hope they didn’t. You can only win and lose nothing.

If it’s a shield tanked ship and you know nothing about their fit or resist profile, it’s a generally good idea to shoot EM damage because either you shoot in their resist hole or they don’t have a resist hole in which case damage type doesn’t matter.

If it’s a shield tanked ship and you know nothing about their fit or resist profile, it’s a generally good idea to shoot EM damage because either you shoot in their resist hole or they don’t have a resist hole in which case damage type doesn’t matter.

The EM weakness is not inherent to shield, nor is an explosive hole inherent to armor. As players progress into faction warfare (lmao) and fighting the chosen faction’s enemies (or “crabbing in fw plexes”), they will start using ships specifically designed to withstand equipment popular with the enemy, rather then mercenaries, criminals, deserters and other lowlifes they’ve been fighting before.

Amarr for example use Energy Weapons, which independend of their charges always will inflict EM and TH. Minmatar’s answer is a hull that is designed to withstand just that: 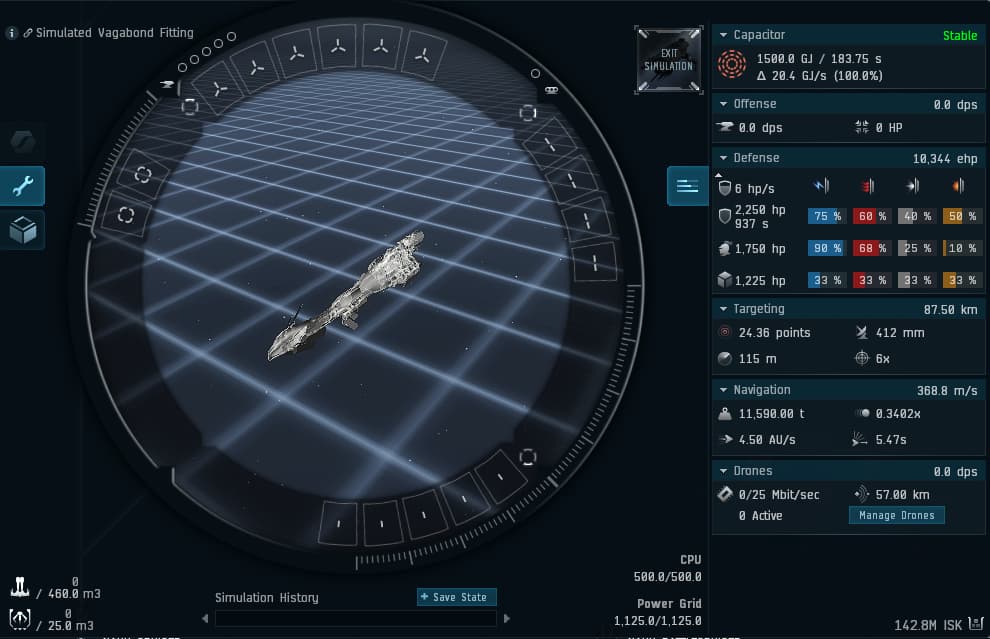 In most Situations, the Vagabond will use Hail Munitions, which do almost exclusively EXP, but sometimes the Vagabond will load the longer range Barrage charges, which inflict almost as much KIN damage as they do EXP (EXP is still the primary).

And now let’s look at how Amarr’s answer to Autocannon T2 munitions looks like: 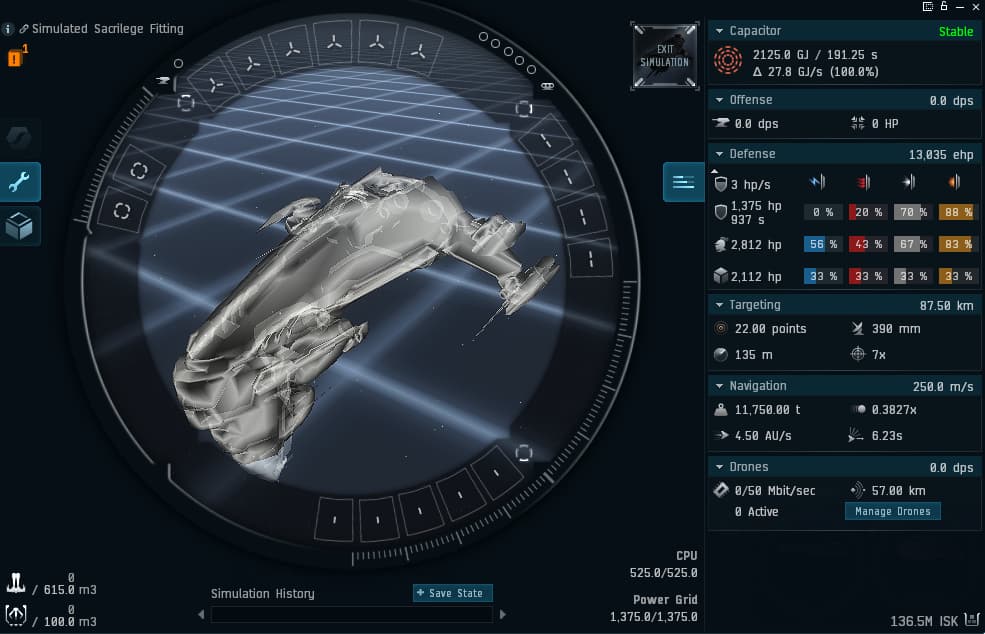 image985×634 61.2 KB
The naked sacriledge is very tanky against Hail and Barrage’s EXP/KIN spam, despite being an armor ship. Why? Because Amarr designed it explicitly to counter the trend of Minmatar becoming Winmatar.

The Amarr hardware is also extra-tanky over other designs, because the Projectiles they’re getting shot with have multiple damage types, which renders the reactive armor hardener module less efficient. Gallente designs might also be armor tanking, but are getting shot by purely-kinetic scourge missiles, allowing the reactive hardener to become a lot more efficient then it becomes against projectile spam used by Amarr’s foes

If Caldari go armor tank, with a Scorpion to fit more jams for example, the EM won’t be exceptionally high nevertheless, as the choice for armor was to get more per-ship-utility then a shield Scorpion would have. Nullers dont do armor Scorpions, it’s what WH-ers do, and they don’t do that when they field an army of Scorpions, either, but when they bring 1 or 2 Scorpions in a “EWar-Heavy Armor Fleet”. If they had a significant number of Scorpions, they’d also bring shield logi and use twin multispectral shield hardeners and an EM rig on the Scorpions, yielding in just as much EM resist as the armor counterpart, but higher resists for everything other then EM.

Likewise, an armor Typhoon in an open FW anom might attempt doing something about it’s EXP weakness, but people that engage a Phoon in an open anom (where noone goes in order to rat) won’t know whether the phoon was shield or armor tanked before they start shooting it, so they wouldn’t explicitly load EXP charges anyways.

That’s a nice example how every generalized rule has exceptions.

Yes, T2 ships have special (and higher) resist profiles and the T2 Minmatar ships have very high EM resists for their shields.

It’s nice to know there idea behind the resist profiles of the T2 ships, I didn’t realise it was because of the preferred damage of their faction warfare enemies.

Anyway, EM is still the biggest default hole if you see a (just listing a bunch of common shield cruisers I often see in fleets): Scythes, Caracals or Cerberuses, Ospreys and Basilisks, Celestis and Lachesis, Bellicoses… basically any shield ship that isn’t a T2 Minmatar ship. T1 minmatar ships, T2 ships of other factions, they all seem to have EM as their weakest as far as I can tell.

Well, guess I learned something today: use EM against shield ships unless the ship is a T2 Minmatar ship.

use EM against shield ships unless the ship is a T2 Minmatar ship.

…when you should use a good solvent to un-glue the duct tape.

That “the advanced, upgraded ships were upgrade to better deal with our enemies” is a nice bit of world building by CCP. Hopefully they are going to start showing some more of that.

I find it funny if I want to shoot something with an EM hole, I need to get somewhat close to use EMP (range is usually descent even after being cut by 50%) but if the hole isn’t an EM hole (or if there is no hole), Tremor has nice range.

Now where is the long range kinetic ammo? This is where someone says “does someone need me and my HAM Drake?”

It’s very difficult to tank EM when you’re on a frigate/destroyer, or you’ll have to do an immense slot sacrifice to accomplish it.

Yes, this. The alternatives are:
Fix a specific hole and have generally modest resists, or
Put a multispectrum in and generally uplift all resistances.

I only tend to bother evening up resists if it’s advantageous to do so (lazy mission running across many enemies) or if I know I’ll be facing opponents that will exploit a hole because it’s a known issue with the hull.

For a lazy even fit then I’d often be fitting rigs to make the hull basically balanced to start with.

Considering that most PVP engagements happen very fast I don’t think you have a lot of time to consider changing out ammo type for the ship type, not to mention fleets are often made up of multiple types of ships.

Pick an ammo type based on range and just go with it, unless your FC says to specifically switch ammo.

It’s very difficult to tank EM when you’re on a frigate/destroyer,

Throw in one multispec, one EM hardener, one shield extender, and one damage control and you’re done. It’s no that hard. look at the Corax, you can do that and still have a prop mod.

Huh… so i guess it’s not that uncommon to find it intact.

It has good tracking and some thermal, kinetic, and explosive. If you’re trying to be fast, tracking is important.
Yeah. You won’t melt their face, but maybe you shouldn’t have your face that close to them anyway.

Yeah. You won’t melt their face, but maybe you shouldn’t have your face that close to them anyway.

If they don’t melt fast enough, you need to bring more alts

If the fleet has 75 pilots in their Munin wing, I’d image it can just volley away ship after ship.

If there is 25 pilots in Munins plus 50 alts in minins, isn’t there a risk there is enough time for reps to kick in?

It’s not like there is a “shoot what my FC shoots” button, you need to lock and fire yourself.