greetings capsuleers,
i’m my alliance’s designated battle camera for our fleet fights to make promotional videos.
i’v been trying to take some cinematic camera like shots for the footage and couldn’t get very smooth results.
so i was wondering if joystick support for camera movements in tactical and orbital camera modes either is possible or could be added.
this game looks amazing and i’d like to be able to show that in my videos
any feedback or help y’all could provide would be fantastic!
-TQ

I think Ctrl F9 will remove the HUD making it easier to get shots without all the overview and such… far as joystick, i don’t believe there is support for that.

Tried any software that binds mouse movement to analog inputs?

i havent but you have to hold click down to move the cameras, that might get complicated through third party software

i’m a big fan of the control F9

Have you tried sliding the ‘Inertia’ camera setting all the way to the left? 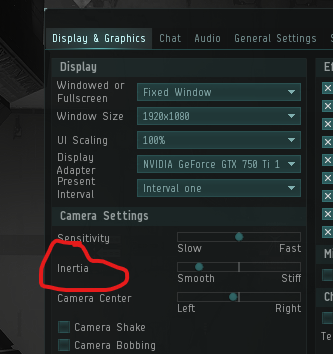 i havent, thanks for the suggestion!

Have a look at this little program, it might just help you. Just remember than you’re ONLY allowed to use direct “keypress to action” options, you’re NOT allowed to create any sort of timed, repeated or scripted macro.

Just remember than you’re ONLY allowed to use direct “keypress to action” options, you’re NOT allowed to create any sort of timed, repeated or scripted macro.

Actually, I’m not sure that’s true. If I remember correctly, you can in fact make macros with multiple timed inputs, as long as you activate/deactivate them manually. As in, I can use my mouse drivers to bind a series of inputs, like Control-Click to target something, followed by a few successive F key inputs in order to activate modules. Such inputs can get as complex as you want them to, including reasonable activation delays.

What you’re not allowed to do is program logic for complete automation to occur while you’re not present. So if I take the macro above, and add logic in which I use OCR software to check the overview for a specific icon in a specific position, and have it activate the macro based on that criteria, that would be botting.

that really wouldn’t work for him. EVE was not designed to be used with a joystick, Several others have tried using this program among other ways to use joysticks but nothing works because the games mechanics don’t allow that possibility

thanks for the warning!