Breach of courier contracts without consequences

Public courier contracts are the target of a lot of scams, some expected, some straight-up taking advantage of the technical debt incurred from the introduction of new features.

Example:
Current game mechanics don’t actually care if the courier contract issuer is breaching the contract. You can be in a one-man corp, deny access to your structure for any deliveries after a courier contract is accepted, then wait and collect the collateral, rinse and repeat. At no point will a warning pop-up that you are assuming responsibility for breaking courier contracts in progress, issued by yourself, to be delivered at the one-man-corp owned structure you are making inaccessible…

In any sane market, it’s not the couriers problem if the courier contract issuer decides that he doesn’t want anything to get delivered to his address after all. As the courier i should at that point be able to jettison my cargo contents AND collect my fee + collateral.

It would seem to me that at the very least, you should have to get a 3rd party, not bound by any contract, to make the structure inaccessible if you want to scam couriers out of their collateral. Either that or use an alt to setup the courier contract in the first place.

At no point will a warning pop-up

There is clear, highlighted message when you accept contract to structure. Also, you can deposit cargo to structure even if you don’t have docking access. Not to mention that you always should use alt that name is not connected with character that accepts contracts.

But why I even try to explain basic game mechanics when your only point here, is to rant because you lost isk?

Unless the feature have been rolled back, you don’t need access to an Upwell Structure to drop off cargo. However if you ever want to pick up anything that you have dropped off at another time, you ofc need to have docking permission. 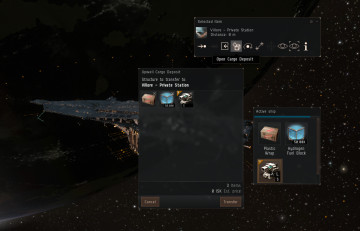 With the September release, Upwell Cargo Deposit allows pilots flying outside any Upwell Structure to place items into their own personal hangar in the structure without docking, even if they do not have...

Doesn’t work to avoid the scam. If the structure is in hull timer and out of fuel, the delivery feature is offline. The ONLY way to know that is, to be on grid with the structure and try to deliver something.

Hence practically the delivery feature fosters the scam, as it tricks people into making deliveries to structures in good faith.

The part you are quoting was concerning the person manipulating their structure, they should get a warning they are about to invalidate their own issued contracts.

Obviously cargo depositing can be prevented by the the owner of the structure as well, so that is just part of making the structure inaccessible which i mentioned already. Thanks for helping to make that more clear.

Thanks for the tip about using alts to accept contracts, it’s not relevant to the mechanic i’m talking about hence i didn’t mention doing that. Please keep the tips coming, but perhaps you could not jump to conclusions as much in the future given you were wrong on every single count thusfar.

PS. Contracts are a concept from real-life, and the feature is clearly meant to mimick how contracts establish a task, a reward, and a failsafe in case of contract breach (collateral) in real life. What are you even talking about?

However if you ever want to pick up anything that you have dropped off at another time, you ofc need to have docking permission.

Why not make it possible? It’s just code.

That’s a mostly incorrect take, an upwell structure can have docking disabled AND have a non-operational cargo deposit. The cargo deposit was offline i recall correctly, so it’s not technically an access issue, but the result is the same.

It is, the statement from ISD is not correct. Move stuff to asset safety manually.

Thanks for chiming in grimaxemorpher, like i said though, both docking and cargo delivery was impossible, i tried, multiple times.

Thanks, didn’t catch that intent!

I would point out that the critical bit of information here, is that the courier contract issuer is also the character manipulating the structure status & docking access to the upwell structure where delivery is expected. That’s the moment the issuer is failing to uphold his end of the contract.

The example of the one-man corp just makes the issue obvious for outside observers to deduce what happened.

I’m specifically not raising this issue for any other situation then that.
(edit: more specific language)

I know we’ve talked about this before, but I don’t think there are really any easy solutions.

I can see it gets complicated quickly to do all the checks needed if you want to do them as the contract issuer is changing the state of the upwell structure, still there’s a simpler way to solve this that seems pretty easy to implement from where i’m sitting:

Always allow courier packages issued by the current structure owner, to be delivered through cargo delivery, even when non-operational. Call it the emergency courier delivery processor.

Would that be problematic somehow? I’m not into the details of upwell structures, so i don’t know if that opens up loopholes.

Why? Just don’t disable deposit option. I don’t see how this can be abused.

That would make it really easy for folks to asset safety stuff, even on structures that are about to die.

How? Can you explain? With deposit you put something in the structure, not taking something out. Asset safety is available till the very moment it explodes, regardless of the status. Why should one put stuff into a dying structure, for which profit?

Players who are looting the field in a fight grab stuff, dump it into a dying structure so they can get it out through asset safety when they’d otherwise lose it. Same with roaming gangs trying to get stuff out of space they wouldn’t otherwise escape with (ESS, etc).

I don’t have an issue bringing it up.

I mean, the station need to be in hull timer and abandoned. A situation which lasts a few days in the whole lifetime of the structure? When I want to evac loot the chance I must use such a structure in that particular state because there is absolutely no other option is minimal. There are thousands of structures in null which are fully operational.

This should not be an objection if you limit the always-deliverable items to courier packages.

Since i’ve been away, i had to test, but yea, you can’t make a courier package in space from items in your cargo bay.