Bring back Dust 514 for pc please

I used to play dust all the time, it was my favorite game, played it all through highschool and well after. Now that it’s gone, and since ive graduated and found my own place, I’ve had to fill the hole that was left by losing my favorite game with the poor excuse of a knock off that is planetside 2. Please bring dust back, id gladly pay to ride into battle in my rail madrugar again. 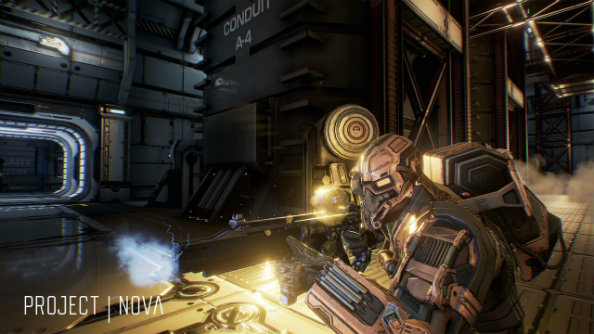 Project Nova is very much still happening. The first-person shooter, inspired by the Eve Online universe and acting as something of a successor to the abandoned PS3-shooter Dust 514, is still being worked on by CCP.We got hands-on with Project Nova...

Whew… October, a lifetime away.

When did the most recent purges happen?

+1 to the OP. Even though I never played DUST, I loved the gameplay idea of it, just didn’t like the platform CCP used to release it.

However my Nephew was into shooter games like that and had a PS console account. After I showed him the game previews, he made an account and started playing it. The fact that CCP abandoned DUST instead of updating it for the next PS version was definitely a waste of precious resources and development time.

Personally I think CCP should have integrated DUST with Eve and used ‘The Door’ in the Captains Quarters as an entry point into DUST.

Anyway, if CCP salvaged the work invested in DUST and made it available on PC platform I’m sure it would generate a following, especially if it interacted with the Eve universe like it did before. Who knows, it might even be profitable.

Dust was a software dead end. They tried to do too much in house custom, ended up with something that couldn’t go forward. It was mismanaged from the beginning to the point of not being compatible with itself. There was no saving dust, no salvaging the work, no making it available on other platforms. No amount of updates would have taken it forward. It needed a clean reboot. It couldn’t even be resurrected as Project Legion. Total loss.

It also had some sort of intellectual property agreement tied to Sony. That was the explanation given as to why characters would not be transferable to a new PC based game.