Was doing T2 Dark in Hawk today with LRM fit, right after downtime. To my surprise, I was doing only 8% damage. I could not finish the room. I’ve done bunch of T2 darks before but this DPS issue popped up right after downtime today. It was impossible to kill anything in that room. My skills are all LVL 5 and the fit is just standard T2 Dark LRM.

This went on for 14 minutes after which I decided to just fly out in the abyss and die. 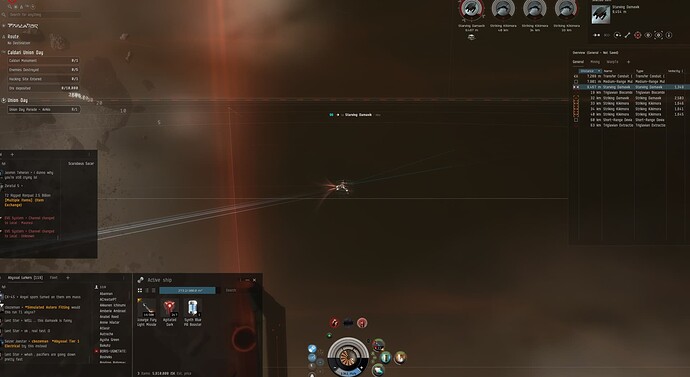 You are really wondering why you don’t apply well to a frigate moving @ 1.3km/s?

They are light missiles, they should apply very well. Have been doing T2s Dark for a while, never had this issue. You obviously have no clue what you are talking about. Light missiles apply very well in Darks, compared with Heavy / heavy Assault.

My kinetic damage was 1154 per volley. I was doing between 93 and 100 per volley, so less than 10% of my DPS. With 54% kinetic resists on the Damavick armor I should have been doing about 500+ per volley, which is what I was doing on other runs and everyone else in every video was doing.

Here is what should happen: T2 Dark Abyss - Hawk - Sample Runs I - YouTube

Put a ticket for a reimbursement with logs and all that stuff. Here at best you can get pat in the back to feel better.

I dont have logs really, just the screen shot. Reimbursement doesnt matter really, I just wanted to run more abyssal and cant now cuz I dont know what is bugged

So my last post was wrong because I used the Damavik’s radius instead of its signature radius. Yes, those are two different things.

What I think most likely happened as that you had the bug happen to you were only one of your grouped launchers got loaded.

I thought about that, it was not the case. The DPS showed 267 or something and the total kinetic damage 1154 so it was all 4 launchers there were loaded.

Your game logs are stored locally are they not?
I have game logs from ages ago on my local drive.
Would be interesting to see them.

Yeah probably do. I opened a ticket and was told it looked like only one LM launcher was firing, from the group. The other 3 were turned off. I was reimbursed and told to ungroup and regroup the launchers. Apparently after DT, the 3 of the 4 launchers were deactivated but since they were groped, they looked like they were loaded and functioning, which they were not.

Makes sense. It works that way when you have grouped weapons and for some reason some of them go offline. Icon stays the same. Even if you use only part of the stack/group.