Oh good, a new straw man argument. Not quite as much misplaced sarcasm as the original post, but good effort.

Oh good, a new straw man argument. Not quite as much misplaced sarcasm as the original post, but good effort.

Before I went back to null I did L4’s in a gazillion isk Marauder that I would never think to fly in null sec, made bank with zero risk, then sold it for more than I paid for it. Tell me again how carrier ratting is the cancer eating at Eve’s economy.

Level 4s? You forgot the most obvious highsec offender of them all - incursions. I took a cut in pay from high-sec incursions to rat in null. And a serious jump in risk. The last couple of nights when I had a window to play, I couldn’t do any ratting or money-making at all, because of neuts cruising around ready to call in drops. Note that I’m not complaining - nullsec should be dangerous, and I have no problem with that whatsoever. I’m just comparing it to highsec. I made a lot more ISK running incursions in highsec, with zero risk. Yeah, it was more inconvenient, because I had to queue-up to get in fleet, post fit, do this, do that. But I definitely made more, and there was never any downtime because of neuts in pocket or whatever.

Oi! That is not true.

OP, sorry but your story seems unclear to me

so tldr: your story does not imply anythg about “carriers are not OP, they are not even able to kill a ratting cruiser”

Dont Null Sec ratters keep other characters in High and Low for when they want to make safer cash and there’s neuts all up in their turf, dawg?

I am still trying to figure out why they need so much isk.

Dont Null Sec ratters keep other characters in High and Low for when they want to make safer cash and there’s neuts all up in their turf, dawg?

Please don’t laugh, but it is indeed the case with the Vets. My oldest guys in the Corp all have several alts in the HS to relax.

Well, I just provided a real life scenario where I found an AFK ratter I wanted to kill, and I tried to use a carrier to kill the guy (HE WASN’T EVEN AT THE KEYBOARD!), and couldn’t. You’d think that if the carrier was THAT OP, it could practically kill things with the pilot being AFK, right?

I look at it this way: you’ve obviously been a carrier pilot, and strongly concerned about the power of carriers, for years now. (Your own post saying “nerfed carriers, so I quit subbing for a year” etc.)

Now, it’s taken you years to find and post an example where your carrier did not look OP. And it’s an extreme example of exactly the sort of thing you would expect a carrier to struggle with - applying enough damage to kill a fast, small, super-high regen ship well known for being OP in those areas.

The fact that it took you that long to come up with an example you could complain about, when you’re well known for posting threads that border on trollishness for exaggeration and hyperbole, says all I need to know about the OP-ness of carriers.

On a side note, to your exaggerated point of “well no point flying carriers then, just train for an Ishtar”: feel free to train into one, then go attack an AFK carrier set up for high EHP regen and see how long it takes you to kill it. Then you can come back and whine about how your fancy new cruiser is useless and everybody complained til it got nerfed into the ground, and you should just fly a carrier instead since they’re unkillable.

For everyone who thinks that carriers are OP

Sabus probably didn’t tell you, but he is looking more to Rorquals in highsec, not carrier rebalance.

Really, how would they know?

Wow, where is the salt?

For everyone who thinks that carriers are OP go vote for capitals to be balanced for highsec and allowed in highsec: Allow full access to capitals in highsec combined with a broad ehp nerf across all capital hulls

If capitals are balanced for highsec they won’t be OP anymore, everyone wins but bittervets. 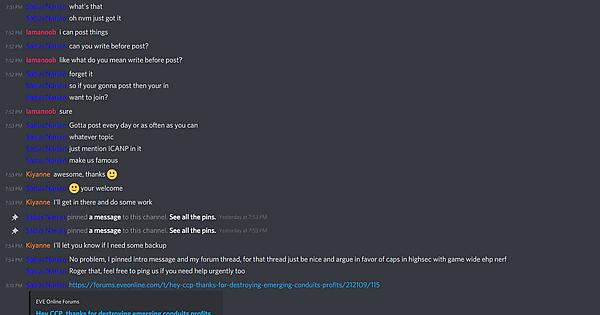 Don’t worry, @Sabus_Narian is going to run for CSM and address carrier and capital issues! He has my enthusiastic support!

Don’t worry, @Sabus_Narian is going to run for CSM and address carrier and capital issues! He has my enthusiastic support!

Look at just how OP carriers are. Able to effortlessly generate 60m/hour by murdering innocent NPCs and contributing to the inflation of isk in EvE. Carriers should be changed so they can’t damage NPCs in anoms

60 mil an hour is an ishtar ratting.

…60 mil a tick with a carrier is possible, but unlikely, and is FAR from effortless.

Sure, I am pretty easy to find. Come take a shot.