As a player for 16 years, who has taken breaks in between.

I would like to know as I am sure many others are, What are you going to do about the dwindling numbers, and the inflation and destroyed economy that you caused with bad decisions?

Pearl Abyss is clearly out of touch with what EVE Online was. No original founders of EVE exist in CCP and havent for a long time now. Maybe you should considder injecting some fresh blood and Ideas into EVE before your nearly half a Billion dollar investment goes down in flames.

I will continue to play until the last cluster shut down.
We the player want to see EVE continue to grow and evolve. Just because of it’s Age doesnt mean people are not interested anymore.
They are dropping off because of YOUR terrible decisions.
Listen to the community and fix it. Or it WILL die.

I know these discussions on this have been done to death. but CCP/Pearl Abyss need to acknowledge now that you are Dying. Dont milk it to death, Fix it.

Because right now it just looks like youve gone into money grab mode and have little interest in building it up.

I genuinely hope thats not the case.

I both Love and Hate this game and the community. I like many others dont want to see it in this spiral.

I wonder if @CCP_Rattati still believes all the players he caused to quit playing are going to come back once they see how great he made EVE.

Oh imagine all the untouched asteroid belts soon, 27 of us still playing with our 7934 alts.

Pearl Abyss is clearly out of touch with what EVE Online was.

Well, I’m sure Pearl Abyss is, since they weren’t even around back then. However you’re shaking your finger in the wrong direction.

No original founders of EVE exist in CCP and havent for a long time now.

The CEO is Hilmar Pétursson and he’s been at CCP for over 20 years and CEO since 2004. I mean, yes, he’s not very good at CEOing and he really doesn’t care much about EVE except as an ego-prop, but he’s there.

PA stated CCP would operate as an independent studio without imposing any changes on it. Same staff, same decision makers, etc. This was in fact their biggest error because it’s the decision makers at CCP who were slowly destroying the game before, during and after the PA merger.

I get that you’re angry and disappointed, but seeing as it’s CCP who’s been making those terrible decisions for over a decade now, you might want to focus your anger on the actual cause.

My local shopping mall was operated by Westfield Shopping Towns. Everyone complained how the Australian company didnt know this or that about shopping in my part of the world, and were running it badly.

Then it got sold to some Chinese investment firm, who promoted the old mall estates manager to being the overall manager of the mall.

Guess what, its now half empty and he sold half the loading dock to a hipster street food vendor.

Anyone have a rough idea on how many paying subs they would need to be profitable? Or might the shop & plex be more important as a revenue stream?

I keep reading/hearing EVE is dying/dead over and over, it’s quite disheartening. Surely there is a flip side to this as in some positive news for once?

I heard just the skin sales alone more than covers all their costs. Take it with a grain of salt thou.

Anyone have a rough idea on how many paying subs they would need to be profitable?

Too many factors to judge. Are the subs $20 monthly ones or 24-month ones? Does ‘profitable’ mean “just vs. EVE expenses” or “against every other failed project Hilmar decides to throw EVE money away on”?

Various financial reports show CCP makes roughly around $60 million per year. They used to do that with 300,000 subs, but fewer Plex/package/new items sales. Up to 2020 they were doing about the same, but with fewer subs and more Plex/packages/injectors etc.

In 2022 they’re almost certainly selling less of everything, while at the same time starting more new projects to “broaden their appeal”. For instance, there’s good indications they’re down to about 110,000 subs now. Call it $13 per month average sub income. $1.4 million per month total sub income. $17 million a year.

That means people better be buying a hell of a lot of Plex, packs and injectors this year.

I heard just the skin sales alone more than covers all their costs.

Well you know what they say about believing what you hear.

Where can you find some ccp official financial reports?

I’m not sure it is entirely CCPs fault.
I mean; yes-some. but only a true resurrection spell is going to bring some players back . . .
CCP is so tied into the West’s “Black Box” blues only CCP (the other one) can keep it alive; and they may not care to.

Where can you find some ccp official financial reports?

CCP used to publish their own, back then I would dig into them a bit.

Currently you’re going to find them in Pearl Abyss statements, with fewer details. I’m also less interested in digging these days since there’s not a lot we can do with the info. I usually wait for someone else to dig them up and do some analysis and I follow up from there on the parts that interest me.

Mostly you’re going to have to Google for Pearl Abyss CCP quarterly financial reports to get started, eg.: 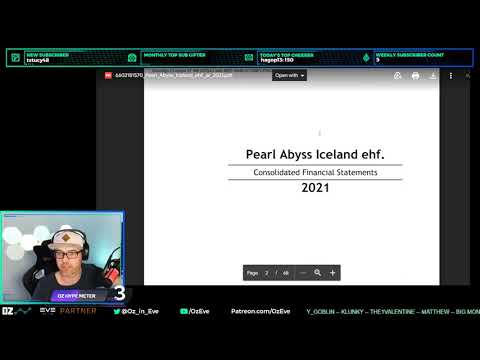 Much like Netflix, CCP recently announced a subscription increase of 33%, increasing the cost of a one-month subscription from 14.95 US Dollars (USD) to 19.99 USD. These price increases are due to launch on May 17, 2022. EVE Versus Other... 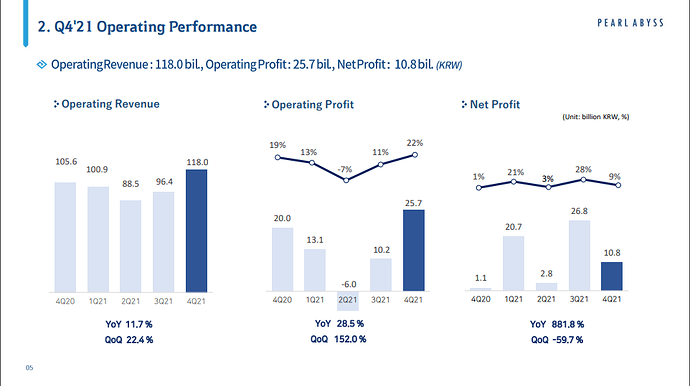 Early this morning (or yesterday in the U.S.), Pearl Abyss held an earnings call covering the final quarter of 2021. Hang on folks, because ...

Gotta say I agree with everything you wrote, especially this…

I will continue to play until the last cluster shut down.

Which will probably take quite a while, more than likely they’ll milk this game down to the very last penny…

I don’t know if you noticed this or not, but players seem rather split on how exactly to fix Eve. So, I’m not exactly sure how CCP is supposed to fix things by listening to the players… unless you mean they should listen to me in particular. In which case, good idea.

For real though, I think part of the problem is that CCP has been compromising on their values in order to make Eve appeal to more players, which ultimately resulted in something that no one is happy with. Like, I listen to what some people say, and can’t help but feel like their complaints all revolve around extrinsic rewards and the ability to optimize towards boredom. Needless to say, I think we have some different priorities and values when it comes to this game.

You say CCP needs to listen to the players, but that begs the question -which players?

Meh. That’s enough. I need to be productive.

P.S. I’m not a economic expert, but we don’t have inflation. CCP intentionally increased the build requirements of certain ships. Other things, however, are actually quite cheap right now (i.e. T2 ships). Moreover, the economy might not be super healthy right now, but I’m thinking it’s a far cry from “destroyed.”

Pearl Abyss is clearly out of touch with what EVE Online was.

You mean CCP Developers are out of touch with the players. Pearl Abyss has nothing to do with the current state of EVE.

I am hoping that Pearl Abyss will step in and make employee changes at CCP because after 2 years of losing money something needs to happen.

We get these ‘Eve is screwed’ threads every 5 minutes, and they all have in common the fact that nobody every actually specifically says what is screwed or what would specifically improve things. They are always vague and generic ‘Eve is dying’ posts that end up becoming self fulfilling via feedback loop. It all ends up looking like Dr Morbius and the monster in Forbidden Planet…chased by a terrible monster that was ultimately his own mind.

Well CCP has lost a 1M-2M USD per year for the last two years.

I am hoping that Pearl Abyss will step in and make employee changes at CCP because after 2 years of losing money something needs to happen.

It shouldn’t be too hard for them to realize that the decline in player count started to happen at the exact same time they let @CCP_Rattati start implementing his “all sticks and no carrots” plan for EVE.

Maybe they can start another FPS project and let him go fail at that like he failed at DUST 514 before they inflicted him on the EVE playerbase.

They are dropping off because of YOUR terrible decisions.
Listen to the community and fix it. Or it WILL die.

Sounds like you’re a bit out of touch with the contemporary gaming market, because “listening to the community” would entail turning the game into a true F2P cooperative PvE grinder with instanced gameplay powered by gacha loot box sales.

There’s a reason why mobile games make more in a day than the entire PC MMO industry makes in a year. It’s because they give the people what they want.

What are you going to do about the dwindling numbers, and the inflation and destroyed economy that you caused with bad decisions?

They’re just going to pretend it never happened, that works for corporate media.

We get these ‘Eve is screwed’ threads every 5 minutes, and they all have in common the fact that nobody every actually specifically says what is screwed or what would specifically improve things. They are always vague and generic ‘Eve is dying’ posts that end up becoming self fulfilling via feedback loop.

You’ve said this before but TBH this is just you being a lazy reader. Your account is about 9 months old IIRC, so you’ve missed 2 decades of posting.

Even right now, of the first 20 topics in General, half of them are on specific issues, with many specific posts on what’s wrong and suggestions to fix. Posters differ in their opinions of course but it’s not due to lack of detail of “vague generic Eve is dying” posts.

You may be running into an inability to differentiate good posts from bad ones. Sturgeon’s Law says “90% of everything is crap”. Sadly, this applies to everything from the quality of forum posts to the depth of the talent pool at gaming companies.

Learn to differentiate between the generic complaint posts and the actual problem/solution debates, and not only will you find your details, but you’ll be 5 steps ahead of CCP (who haven’t learned this skill yet either).