Is EVE being purposely sabotaged?

I am a network engineer and worked at a company where a tight knit group of developers intentionally did things to anger customers after the company was bought out by a larger company. The developers were loyal to the old owner that became president after he sold and then did not like the way the new owners ran things and left. They were successful in getting the largest customer to leave before they all left for another job that they all had lined up.

I am seeing a lot of changes here that seem to be just to annoy players. Red dots, money making nerfs and just got told that even new agent missions are being changed so you have to go to other systems for missions that used to be in the same system. A lot of little changes that are starting to add up.

Is there a tight knit group of EVE developers that are unhappy with Black Dessert Online? Are they trying to drive us away?

I am just asking a question to see if anyone else sees what I think that I am seeing.

mmmmmm, Black Dessert. What we talkin bout here, German chocolate cake, browning with ice cream, or something else?

Yes I did make a typo there. It is not my first and will not be my last.

I’m sure Black Dessert is way better than Black Desert. Probably sweeter too.

In all honesty, I’ve never played BDO, nor heard of Pearl Abyss until I came back to EveO at the end of last year. Maybe I’m wrong, but is PA really influencing the direction of Eve? Seems like CCP has been steadily making changes like what I’m seeing now, even way back in 2009-2013 when I played.

I thought the same thing. Then I realized they are not trying to drive away everyone – just the core player base that’s sustained them with a subscription based model for over a decade or so.

Also, there’s no way current developers play Eve online - not the one that piqued my interest when they were busting balls to break 7k pcu.

Hanlon’s Razor: Never attribute to malice that which can be explained by stupidity.

CCP is certainly trying to do things right, they just aren’t being very successful.

Hanlon’s Razor : Never attribute to malice that which can be explained by stupidity.

This could 100% be applicable here.

CCP is certainly trying to do things right, they just aren’t being very successful.

PA CCP is trying to milk you and me for all we’re worth. Success is measured by them as such. They make more money of swipes than they ever did off a sub.

Do you REALLY think red dots drive people away? Really? 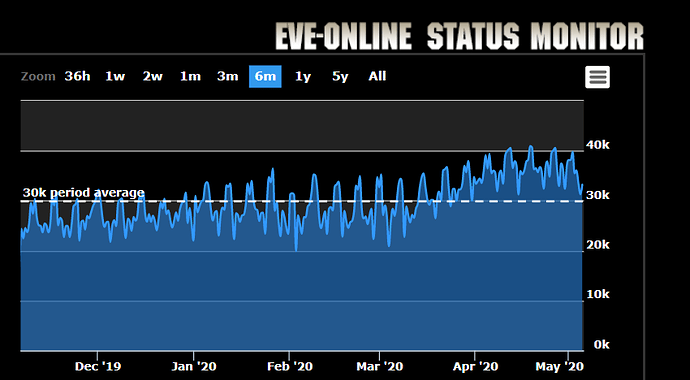 Looks like that sabotaging is working! Daily active player count going up just as expected with a sabotaged game!

Looks like that sabotaging is working! Daily active player count going up just as expected with a sabotaged game!

ya no outside forces bearing down on that metric. EVeryone’s decided around oh , Mid March…I wonder what world event might have influenced this?

But thanks for your genius.

PA CCP is trying to milk you and me for all we’re worth.

@Oldman_Keith needs to be investigated for criminal ddos acts and banned for life.

wut? mission agents changed? really? i have the same agents since 3 years in the system. a change might be refreshing! xD

I can see how players not used to eve might appreciate a red dot and ccp claim it’s received positive feedback from some players/Guinea Pigs.

The risk/reward changes that include the money making nerfs you’re talking about are ccp waking up to the almost narcoleptic state of the game (pun intended). We were all semi-afk playing the game if not outright botting, making vast amounts of wealth but not really doing anything with it.

Don’t know about the noob missions though. Some of them always took you out of system.