I could go on for days listing things really. But here’s one from this thread also.

We need a forum filter to where anything to do with bumping, war decs, cloaking, and Alphas flying barges in the title or body are automatically ignored…

Which is weird to be saying “lets ignore” while responding in a player features and ideas section.

This thread will achieve just as much as all the others anyway. : - )

If you want to fight over territory go to NS or WH, or join factions.

I could scroll up more. I do not feel need to.

I could go on for days listing things really. But here’s one from this thread also.

None of those give any idea that those 3 people don’t see a need for change; and if that is what shouting is, then we clearly have very different views on what constitutes shouting.

QuakeGod: is tired of reading these types of threads, but no indication that change isn’t needed (and I agree with your reply, that if someone is tired of the endless topic coming up over and over and over, then just don’t read them). What’s the shouting down bit?

Solecist: Makes a comment about how much this thread (especially as it’s a daily topic) will achieve. No indication that change isn’t needed (actually I’m pretty sure Solecist agress with the need for change, based on discussion in the discord) and where’s the shouting? Is that really shouting down others?

Salt: Clearly doesn’t like this specific change (structure based war idea), which he sees as too much like sov mechanics, so gives it a -1. No indication either way whether he thinks wars should remain the same and shouting? Is that a shouting post?

I’m just not seeing what you are claiming. How is any of this shouting down others?

and if that is what shouting is, then we clearly have very different views on what constitutes shouting.

Ah. So you want the exact definition. Very well.

Proof by assertion, sometimes informally referred to as proof by repeated assertion, is an informal fallacy in which a proposition is repeatedly restated regardless of contradiction. Sometimes, this may be repeated until challenges dry up, at which point it is asserted as fact due to its not being contradicted (argumentum ad nauseam). In other cases, its repetition may be cited as evidence of its truth, in a variant of the appeal to authority or appeal to belief fallacies. This fallacy is so...

Browse a few of the threads on war itself. We’ll see a bunch of the same people saying no every single time to any suggestion for all of it.

Browse a few of the threads on war itself.

I’ve browsed every one of them (taken part in most). Ultimately, it’s not my claim. I’m just questioning it and clearly you don’t actually have the evidence to support your claim, otherwise it would be easy to post it, rather than the common “go find the evidence yourself” argument.

No loss. You aren’t doing anything many others don’t also do - write something that seems to support your own argument, without actually validating it. Happens all the time.

I’ve browsed every one of them (taken part in most). Ultimately, it’s not my claim. I’m just questioning it and clearly you don’t actually have the evidence to support your claim, otherwise it would be easy to post it, rather than the common “go find the evidence yourself” argument.

You received multiple statements in this thread and then decided they were not what they said.

Moving the goalposts (or shifting the goalposts) is a metaphor, derived from goal-based sports, that means to change the criterion (goal) of a process or competition while it is still in progress, in such a way that the new goal offers one side an intentional advantage or disadvantage. This phrase is British in origin and derives from sports that use goalposts. The figurative use alludes to the perceived unfairness in changing the goal one is trying to achieve after the process one is engaged in...


What possible reason would I have in providing more when you’ll just change what you want to be rather than what is?
Scipio_Artelius (Scipio Artelius) April 4, 2018, 9:49pm #75

You received multiple statements in this thread and then decided they were not what they said.

Actually, they are clearly what they said. It would be crazy to argue otherwise, and I’m not doing that.

They aren’t what you said.

You require at least these to have proper discussions.

Then how about we discard any and all statements about what needs to change and collect up the views of people on the thread about what is good, bad, and ugly about the way war currently acts. Or we can ignore everything again.

The good, the bad, and the ugly. What do we need to make War actual War? Player Features & Ideas

I will not use this post for anything other than to start the thread and collect opinions on things. Good: Destroying things - @MinerArt PvP - @mkint Bad: Easily Avoided - @MinerArt Everything - @Solstice_Projekt @Ameko_Tanaka No step from PvE to PvP - @mkint Watchlist removal - @mkint Ugly: Purpose for fighting - @MinerArt Corp finding tools have zero help in this - @mkint Not treated as a core piece of eve - @mkint Decline participation - @Ralph_King-Griffin Pay Concord for p…

Put your opinion in, or don’t. Your choice.

Put your opinion in, or don’t. Your choice.

My opinion is already in, across several threads going back the last 2-3 years.

As a “not a game designer” I definitely don’t think my ideas are ever any good themselves, and me adding in crap ideas to the growing list of crap ideas, won’t add anything of value. All I would be doing (as evidenced in the suggestions I have made in other threads) is polishing a turd, not actually throwing it away and replacing it with something that actually works.

So personally, while it isn’t required to be a game designer to critique suggestions that are made, I personally see it as better effort on my part to just continue to highlight that wars do need changing, and hopefully the real game designers, based on the weight of the community continually communicating a need, will actually design something good.

Or keep using if by wiskey.

Then tell us what you think is good.

Tell us what you think is bad.

Tell us what you think is ugly.

My thoughts on all these things are already over a tonne of threads.

My thoughts on all these things are already over a tonne of threads.

Highsec wars will almost always be asymmetric - predator/prey. You rarely see highsec PVP groups fighting each other. A look at the MER also shows that 7 of the top 10 regions for destruction are in empire space. If you play Eve for the economic simulation you will recognize that this destruction is essential in a player driven economy - things don’t wear out or go obsolete so who would buy the stuff we make if it didn’t blow up?

You win an asymmetric conflict by denying your opponent their victory conditions - as prey, we learn to survive and then to thrive in a dangerous world. There is a lot of satisfaction in that.

As mentioned in my previous post, the only real issue I have with the wardec system is rookie griefing. I have no problem with discussing improvements to the system - the biggest room in the world is the room for improvement, but be realistic - highsec wars are never going to be consensual contests between equals! Edit: except RvB!

I can not look at it now, so I have to ask: Is that data based on ISK destroyed, or on ships destroyed? I ask, because “ISK destroyed” does not tell how much destruction is taking place, but how much value is being destroyed.

I can see that a high-sec war would have more meaning when really fighting over something other than just killboard statistics and some loot from ships/structures.
It might also add realism if it would require to fabricate some casus belli like in a few strategy games.
And after the war the winner could get the prize if he manages to win decisively (however that would be determined).

But this isn’t about being historically correct. The wardec mechanics are simple. Anything else would complicate things unnecessarily. Changing them no matter how would always have a negative impact on the way things work right now.

In short: leave the mechanics be.

And after the war the winner could get the prize if he manages to win decisively (however that would be determined).

It would not change anything. Tying wars to objectives does not change that some, or even many, people will not see the point in fighting back against the “big groups with tons of SP”.

There will still be people who will be whining about how they can not defend themselves, or how it is unfair that they have to, or how they have no chance anyway. Some might even be right under certain circumstances. Threads like this one will still emerge, certain minorities will still exaggerate non-issues and as always nothing will have changed at all.

History is something worth learning about, otherwise it will just repeat itself over and over again.

The chart is destroyed value. Ships, structures, contents, etc … ISK is never destroyed - it can be removed from the game through taxes, purchases from NPCs, GM actions or other sinks but usually just changes wallets. 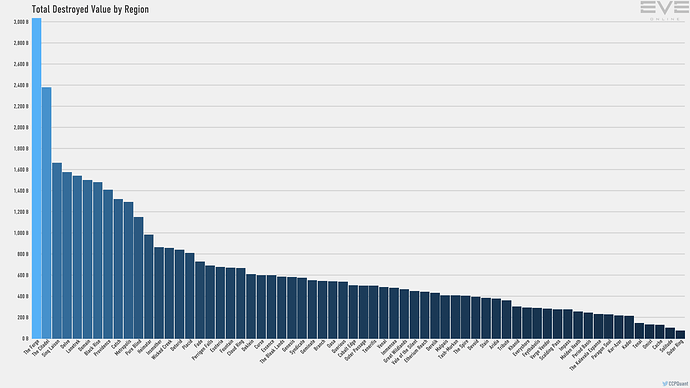 Why not just grow a pair and play in NS or WH if you want to fight over structures?

If the defender doesn’t have a citadel then you can’t war dec them. It would allow smaller corps to grow until they are big enough to have structures and be in a position to defend them

Thank you for clearing this up. It is an important detail to consider.

It puts this quote …

shows that 7 of the top 10 regions for destruction

… into a more appropriate perspective.