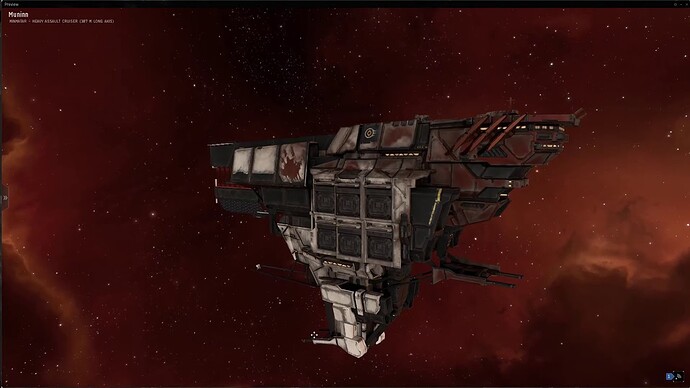 maxresdefault1280×720 98.5 KB
The autocannons on Durannis’ new Munnin spooled to life as the targeting system locked the Angel Cartel Cynabal. The high-pitched whine of the guns blasting at a rapid pace rang through his skull, teeth clenched and eyes burning as he watched its shields drop.

He had become used to Heimatar space these most recent months, mining asteroids out in the low sec space and passing through on his way to and from the Great Wildlands. Now, though, the mission called for blood, and he was glad to deliver. These Angel Cartel scum were shipping slaves captured and sold from the Minmatar underworld out to the less scrupulous Holders of the Amarr. A part of Durannis couldn’t believe that any Minmatar would sell his brothers and sisters back into bondage after all they’d sacrificed, but a greater part of him knew all too well what a man will do when he’s hungry.

Rounds pounded against his own shields, the rapid recharge and heavy damage resistance he’d invested in holding their blows at bay as his own guns tore through their armor. This was the last of the fleet he’d come across, the last his intel said would be out here, and unless the asshole called for backup…

Three huge shadows warped in above them as the Cynabal started taking hull damage, a trio of Machariels surrounded by a small swarm of Dramiels. Lights flashed on his overview; they were locking him.

“Oh, ■■■■ you,” he dropped in local, spinning in space as the Cynabal caught alight, the odd curved ship snapping in half as he started locking up targets.

He released his media drones, issuing them mental commands to make sure they had the sun at their back while broadcasting. The bloody hand print, the symbol of the Bloody Hands of Matar, stood emblazoned on the side of his ship. He patched in his comms and started the live feed to the Scope.

“This is Durannis Vern, standing member of Electus Matari, reserve Spike Lieutenant of the Minmatar Militia, and Representative of the Bloody Hands of Matar.”

The drones spun around his ship as his guns carved a hole in the Dramiel swarm, his shields taking heavy damage from all the incoming fire. He flew through the debris, scattering corpses and garbage in every direction without care. These people were scum, traitors to their own, and they deserved the worst he could give them.

“We are not what you’ve been told. We are not men and women to be feared by the citizens of the Republic, and pose no threat to those who fight on their behalf. We fight beside you, a sword of vengeance upon all who would keep our people in chains.”

His shields were almost gone, his primary defense. His shield power relays were working overtime, his crew scrambling to maintain shield integrity long enough to take out the Angels. The Dramiel, though fast, were little match for his quick tracking, and soon the last of them was a crimson blast among the stars.

He locked up the first Machariel, taking armor damage as his shields struggled to reconstitute themselves.

“On behalf of the Bloody Hands of Matar, I call for a ceasefire between us and the Seven Tribes of Matar. Our leaders are willing to discuss terms with the Tribal Council and the Sanmatar, so that we can turn our focus from defending ourselves to fighting the real enemy. The Imperials, and those who would sell them the flesh of men.”

He kicked his guns into overheat, finally piercing the Machariel’s shields as he wove a route between the others. A lucky shot missed him and plowed into the enemy he targeted, blasting their armor to smithereens as he tore into its hull.

“The so-called Angel Cartel is one such enemy. These men fight to defend what they consider their property; slaves taken from within Minmatar borders, sold by members of the Republic to feed their greed. I would call for all funds saved from ceasing the fight against the Bloody Hands to go towards bringing these slavers in the underbelly of our society to justice. We cannot turn our attention fully outside our borders until our own house is in order.”

The Machariel was losing pressure now, explosive gas flooding the space around it as it suddenly came alight, blasting the ship into pieces that framed the Munnin as Durannis made his demands. His shields were up again, recharging faster than the twins that remained could carve through them. Now it was just cleanup.

“And I would call on all capsuleers loyal to the Republic to consider if they are doing all they can to serve and protect our people. Have you enlisted with the militia? De you scour the wrecks of your Amarran kills for surviving slaves to be returned to the Republic? And would you stand with us, the Bloody Hands, to do what must be done to finally end Amarran tyranny once and for all? Will you make your hands bloody, so that your brothers and sisters, sons and daughters, mothers and fathers can breathe free? I call on you to take a stand, to march with us, and to turn the tide against our foe for the final time.”

Another Machariel, blasted to nothingness, caused reflections to dance against his SKIN, a flickering bonfire on a field of crimson. The final battleship slowly turned, preparing to warp away. He had no scrambler on this fit, so he’d have to let it go.

“Look, watch them turn and run from a single one of our number. Imagine what we could do with hundreds, thousands. If we stand together, there is nothing we cannot do. End Broadcast.”

He recalled his drones, the Machariel warping off as Durannis smiled contentedly at himself. He’d never been one for public speaking, but so long as he imagined he was talking to the void, he could puff out his chest and pretend it was him alone out here. He set a course for home, breathing a sigh of relief that the fight was over. No matter how confident he sounded, that had been a close one.

“Aura? Patch me through to Bloody Hands command. They need to turn on the Scope.”