Had to cut/paste to get there, but thanks for the update.

Sounds very exciting and scary. Fix the stupid is always a good motto, though.
I’m concerned that while getting input from the CSM on how people play in WH,NS, and LS may be an accurate source of data since that is where they play, your input on how HS players react and their form of play may not be accurate. Steve’s form of gameplay is far outside the norm and the rest of the CSM tends to have merely secondary and lesser toons operating or making their living there. In the past, the CSM has viewed HS not from the point of it being their major (or even only) gameplay, but merely an adjunct area where they can min/max and gain whatever resource they are looking for ( other than isk). The times that the CSM presented their view of what HS should be or what players are looking for, it ran counter to what most HS players are looking for ( and no, it isn’t for a PvP free HS either).

Willing to stay in my seat and ride this year’s changes, but if we have a repeat of RW or any other unasked for content added at the cost of needed revitalization, well then many of us will seriously rethink our commitment to CCP and EVE. Looking forward to the transcripts; perhaps reading between the lines.

Thanks for being a source of info, especially since the rest of the CSM remain in their same old cocoons.
May not always have agreed with Brisc, but I sure miss how involved he was with the community.

Thanks for the heads up about the link. I fixed it. <3

May not always have agreed with Brisc, but I sure miss how involved he was with the community.

That I have to agree with. CSM should IMO be around more often to actually listen to the people who vo… im not gonna finish that because we know the goons are gonna stay in delve and talk to the csm that way while leaving those of us who would like to talk to csm with only one or two options… and now im starting to rant… shutting up.

Ah hmm…well, thanks for sharing this, Dunk.

Kind of ominous on the one hand and kind of "come at me EvE ‘earthquake of change’ on the other.

“Survivor Bias”, eh Hilmar? Yes, I suppose so…however, all of us “survivors” adapted to many changes in EvE already… (we did notice the roadblocks, Dunk - very much so - we just overcame them)

Thanks for the update mate!

Just for the sake of my OCD, there is a spelling error in the ’ There are a lot of new things and changes coming’ paragraph:

But that is only cosmetics. Thank you for the work you are putting into this!

Thanks! I fixed the typo.

Just read the Dev blog on the ecology of EVE…quantum changes and they admit they are just starting.
OK, found the scary part…and I’m encouraged by their success with the botting…but, damn, feel like I found the proverbial “Here be dragons” line in EVE and being herded across the border.

No, CSM got to present to CCP what THEIR alliance members like and how THEIR alliance members would benefit.
The CSM does not speak for ALL players over ALL of new eden, they are simply not that representative; most are in big groups and most of those are nullsec coalition groups. Not all of eve need to herd cats into a blob that need to be told when to sh#t, eat or what to think.

But its nice that you all think so highly of yourselves

Here is the presentation I gave on Industry with the raw survey data of 1,150 players.

Do you believe this is biased toward benefiting my specific alliance?

Biased toward benefiting your specific alliance? No, that is not accurate.

Biased toward mega corps/alliances located outside of HS? Well, yes and your own numbers indicate that most of your data came from those sources. In fact, the vast majority of your input for the survey appears to be from players with multiple accounts (91%) with overwhelming majority (80+%) having multiple industrial accounts. Based from their corp/alliance affiliation, most are in large corps/alliances or their shell companies; a majority don’t have industry as their main activity and have PvP as their most common actions. Most have outside HS as their area of play, with the majority in nullsec alliance space.

While I don’t accuse you of having a bias, there is no question that your survey has a built in bias merely based on how the samples were obtained. This is a long standing problem with both the CSM and CCP. They tend to obtain their opinions and surveys from the same group of people they hang out with and chat with in fleet and alliance/corp chats. Ditto from fan meets and other forms of communications. Brisc at least made some effort to reach out and actively get feedback from players outside his style of play. Can you say the same from both CCP and the CSM now days? I mean outside of that “did you have a good time?” button on log out.

CCP needs to quit having their largest player survey being the exit survey sent to players on why they are quitting EVE. You are not going to get a realistic view on what is happening ( just too pissed/disappointed to take time to fill out). What I would like is to have CCP use their touted data mining techniques and send out targeted questionnaires to long term players based on the statistics their characters have generated so that you get replies and opinions from the exact targeted group you want to look at and not the same people that the people in power deal with on a daily basis. Nearly everyone there “in charge” keep going back to the same people and groups for opinions, yet can’t seem to understand why meaningful change is so slow in EVE.

Just like slumlords sentenced to spend a year in one of their own rundown tenements, I would love to have CCP devs and the CSM forced to spend a lengthy time outside their comfort zone and experience what the rest of us are going through in EVE. I think that the CSM and CCP are trying to improve the game; I’m just not convinced that they are improving my ( and my friends’) game.

So let me get this straight.

Getting 1,150 peoples opinions is still biased.

I don’t reach out to other players for their opinions outside my group.

Do I have that all correct?

This is a long standing problem with both the CSM and CCP. They tend to obtain their opinions and surveys from the same group of people they hang out with and chat with in fleet and alliance/corp chats

Do you have a source for this?

Because if I’m not mistaken, he actually put the survey here on the forums as well.

If you do industrial manufacturing in EVE, please take this survey: https://forms.gle/o8JvmA2b5q7Z5YNPA The information will be used by the CSM at the upcoming summit with CCP. Thank you for your help! 7o

Well, does the sample statistics match fairly close to the overall statistics that CCP has for all all industrial players?
Does this mean that the most industrialist are outside of HS, members of NS/Ls alliances, run multiple accounts for industrial characters, and regularly do PvP? Are those exposed to the questionnaire representative of the current EVE industrialist? CCP has the answer deep in their data mining tunnels, they should know.
If yes and the other metrics of your data source match up to the general makeup of EVE industrialists, then I’m wrong and your samples are not biased. I am not sure this is true based on other industry numbers put out by CCP in regards to regions, but sure, I could be wrong thinking that the input is skewed.

Of course, the slumlord comparison is based on the idea of that sometimes a person/idea must be put to a test under conditions that they themselves may not voluntarily put themselves into. Perhaps a more apropo example is having the country club president forced to shop at Walmart and Dollar General for a year. There is no doubt that having the CSM be asked to explain what HS players are asking for has been a longtime failure. Just look how long it took to get meaningful WD mechanics addressed.
Of course, I know that you merely are using that as a defensive maneuver based on your blogs sent previously.
Perhaps a picture of my happy dog would have made things better? 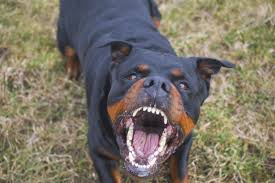 Well, does the sample statistics match fairly close to the overall statistics that CCP has for all all industrial players?
Does this mean that the most industrialist are outside of HS, members of NS/Ls alliances, run multiple accounts for industrial characters, and regularly do PvP? Are those exposed to the questionnaire representative of the current EVE industrialist? CCP has the answer deep in their data mining tunnels, they should know.
If yes and the other metrics of your data source match up to the general makeup of EVE industrialists, then I’m wrong and your samples are not biased. I am not sure this is true based on other industry numbers put out by CCP in regards to regions, but sure, I could be wrong thinking that the input is skewed.

All of this is wrong because you’re making the unfounded assumption that all of the industrial players CARE TO RESPOND TO A SURVEY IN THE FIRST PLACE.

These are representative of people’s opinions who’ve seen the survey and said, “yeah, I’ve got 3 minutes to fill this out and share my thoughts”. Obviously this isn’t going to include the responses from people who 1, didn’t see / know about the survey, or 2, saw it but didn’t care enough to respond.

Yet CCP will probably say this is an accurate representation of industrial players…they have made this type of error in the past (look at mission running/site explorations, Wardeccing, etc).
I’ve already seen over the years what they think mission runners and explorers are looking for based on their input from the csm and “focus groups”. Resource Wars was designed because “we” had asked for it.

I’m not saying there is any evil or self serving intent with what has happened in the past, but it has been far from accurate and has helped prevent effective changes from happening in a timely manner.

Where is this mysterious group of unrepresented “industrial” players that you are implying exist and aren’t being counted by the survey? 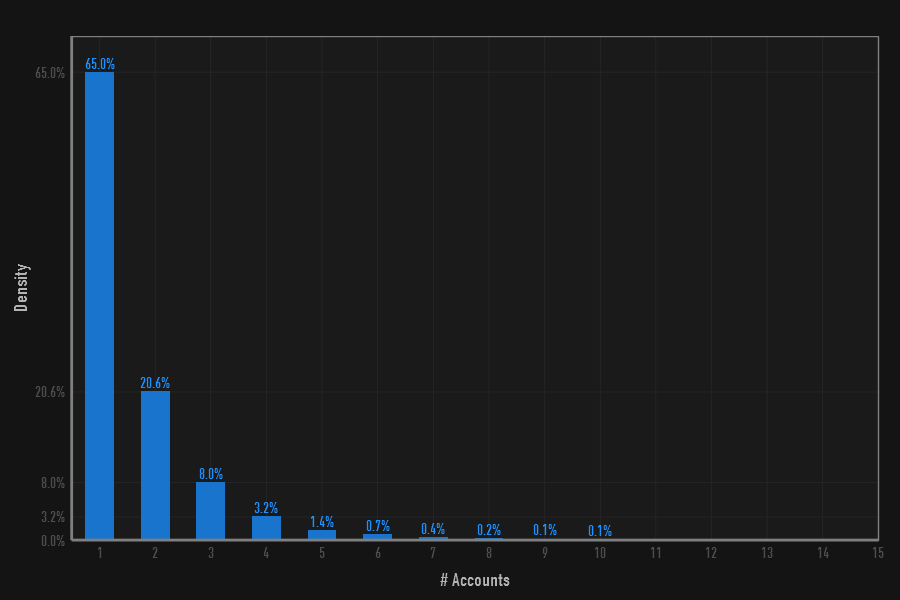 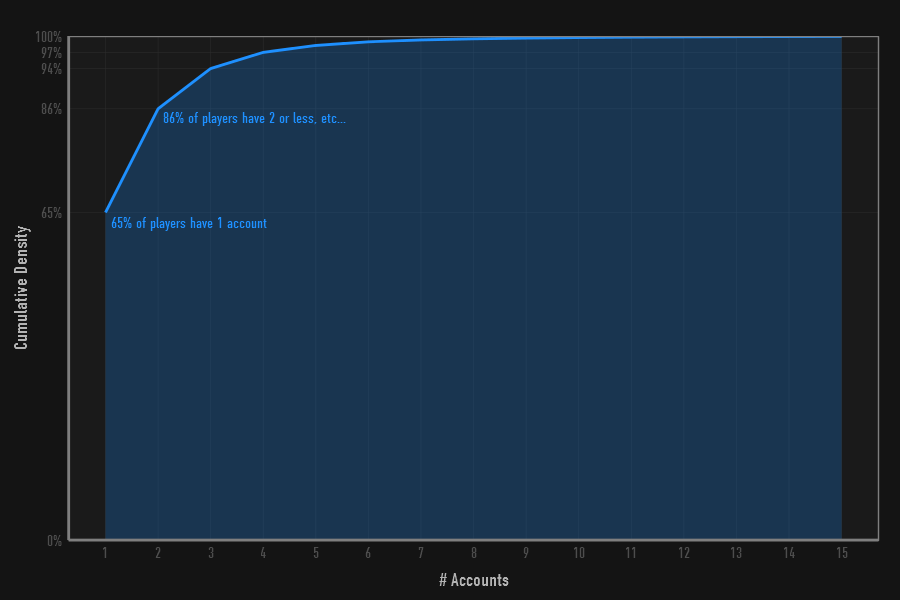 How do these numbers from CCP Quant match up with the source of the data that Dunk gave his presentation?
Yeah, 4 years old, but stable for a decade and when has CCP been really open on any of their internal numbers.
It appears that the latest sources of info that are being used to shape EVE’s future runs counter to some of CCP’s own information. Just saying that the numbers don’t mesh.

…lmao, okay. Wow.
These forums never ceases to surprise me with how much trash can be found.

Yeah, use graphs that shows multiboxing to argue that a self-reported survey of industrial players is not representative. That totally makes sense.

I still don’t see a way to sell extractors/SP while fixing the ecosystem. Do one or the other, both is not possible. Remember, the ecosystem was healthy until SP was released from being time bound.