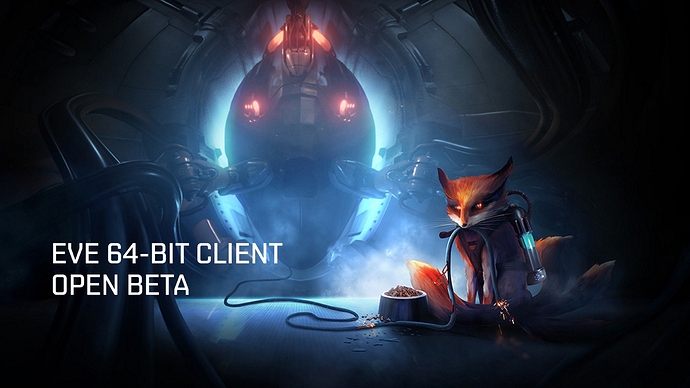 Check out this news item for details on the status of the opt-out 64-bit client rollout!

It might be a good idea to actually invest in building the Mac/Unix/Linux client and libraries if the Windows emulator environment continues to cause issues.

That was a very interesting read, but how does one figure out which “wine” is being used?

Asking for a friend.

It might be a good idea to actually invest in building the Mac/Unix/Linux client and libraries if the Windows emulator environment continues to cause issues.

Thanks @CCP_Falcon - I am rolling back all my accounts to 32-bit. The 64-bit is a great idea but my GPU spikes and makes the GPU cooling fan jump to tornado levels to keep it cool. (2080ti 11gb) - I appreciate the option of rolling it back and putting more on the CPU multi-cores that can handle it better (9960 Intel).

Linux user here. No problem whatsoever with 64bit under WINE latest and my setup.

Another Linux user here, running 64 bit client via steam proton just fine for over 2 weeks. No problems no issues. I hope it remains so.

I’m still amazed that in 2019 we can’t have a native Mac or Linux client. I know that it would require a lot of man hour and money and it’s probably not worth the hassle money wise.

However, I do appreciate that CCP has provided a wine client so I can enjoy the game nonetheless.

I mean shouldn’t be playing on a Mac in a first place… or using that over priced garbage. would you be delaying for Linux?

Are there instructions somewhere on how to upgrade the Wine version? I apparently have the outdated version on macOS, but it appears to just be using what was installed with EVE when I installed it many years ago.

I poked around some on Google and didn’t have any luck finding upgrade instructions.

I’d like to know what happened to the beginning of when you open up or login to the Eve online and you see the history of story and how it was beginning I mean it was a lot of cool space stuff going on ???

WINE Is Not an Emulator

Hammer that into your thick skull. WINE is an API compatibility layer. It involves no emulation, but some API calls may not yet be ported or not compatible in certain cases.

Said that, I second the suggestion to research native OpenGL client options.

Are there instructions somewhere on how to upgrade the Wine version?

I tried a bunch of different things (including a full reinstall that reset all my windows; sadface), and this is what I found:

wine64 wasn’t even installed for my EVE client. I had to go into Preferences in the Launcher and select the Wine version there, but got the same behavior on startup of nothing happening.

Eventually I tried checking “Use dev versions” and selecting:

Before I took all those steps above, there seemed to be no wine64 binary installed, and simply selecting “Run game client as a 64 bit application” in the Launcher settings was insufficient for installing the wine64 binary.

I don’t know about your other macOS users, but that’s the reason I was using the old 32-bit client—it would try to run wine64, then fail silently because there was no binary installed. So I switched back to 32-bit because that was all that worked.

I reinstalled the Launcher a couple times while testing things, so I suspect even the current macOS Launcher install fails to pull down the 64-bit client until you update the items in Preferences to use the dev versions.

Please let me know if I can provide further details to help! I really enjoy playing the game and would like to ensure macOS support continues.

I wish it was able just to load when I was even on steam because when I was on steam it’s like it shows a huge like virtual reality screen and I don’t even have that set up yet. I’m having the same kind of problems with 64-bit and able to get iOS system. I have to eventually go inside the station hanger go to settings and reset everything and then it works well. But what I have to do is change the screen resolution. And then it comes to me saying do you want to keep these settings and it pops back scars all over again and then it stops what it’s doing is make it hard to play the Eve online…

Should I be using Directx9 or just leave it as is with the default settings when using the 64 bit client?

You shouldn’t be using Dx9 at all, unless you can’t run EVE without touching it.