Do you have clear vision?...HE DOES 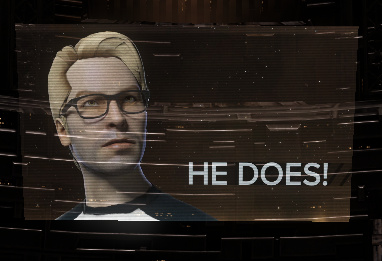 this ad is on loop and… I mean I don’t care but are you going to fix this any time soon?

Do you really want new billboards when those guys could be working on new skins? >snicker<

I mean I don’t care

But you started a thread over it?

We had Glasses dude, then we had another one which was just as terrible - but then we got a new one that had colour and was different and did not involve Glasses Dude. Then we had the Trig one that told us nothing but ok sure, at least it was new so ok for a while but still dumb.

Why are we back to just Glasses Dude? Fk Glasses dude.

You should be banned for posting this.

I can pee clearly now, the clap has gone.

Just buy the glasses advertised in the ad and it will disappear… I promise.

Or add the digital readout for the capacitor. I have been waiting about 8 years for that one.

at least we had captain’s quarters for a little bit though…? lol…honestly…they started working warp fold up models back when PI was introduced…

It must have worked partially…I voted for xenuria. (wonder if she still plays…)

I want corp ad’s. No one cares about your overpriced character cosmetics. I want to see corps advertising.

A civilization that can clone entire human beings and transfer consciousness and memory, but can’t correct faulty vision?

I cannot comprehend the reasoning behind this Anderson Cooper lookalike sporting ancient technology on his face. Advertise some implants or something that remotely makes sense.

The same civilization that cannot develop an autopilot that warps to zero?

I can pee clearly now, the clap has gone.

I’ve peed on all obstacles in my way

i guess they cant see clearly because the rain isnt gone.