Well i think eve is telling me to stop playing. 2 of my accounts are omega but it shows them both as alpha even tho they still have almost a month game time left ( 15-7-22 and 18-7-22 )
Cant even log on to eve support as say page not found. Also have plex missing from 1 account.
If a GM or someone can pm me so i can play ???

There is some kind of massive net outage going on right now.

Same issue here. The problem is on CCPs end.

It’s not, Cloudflare is having some kind of issue.

I get a network connection error at authentication but obviously I’m connected to the internets. Must be something technical on their end I think.

Same problem here if you disconnect you gonna be in alpha.

I don’t get it. “80% of my websites don’t work any more and 17 other programs I use, including discord, also croaked it. Lets blame EVE for it”. 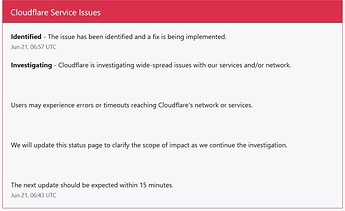 Yep, was in an Abyss when this occurred…RIP pod and ship…

Funny thing is that the account actually does run out of Omega tomorrow so I thought I had mixed it up and it actually just ran out.

The second account never got disconnected though until I manually quit.

I have heard that they will reimburse abyss losses during mass DC’s. So, it’s worth a shot. Probably will take a while to get back to you though, considering that a lot of other people will likely be filing tickets.

I wonder since its abyss space their usual policy of only getting destroyed objects should be null and void right? since no player could have picked those up

Cloudflare has posted a blog on this morning’s outage: https://blog.cloudflare.com/cloudflare-outage-on-june-21-2022/

As CCP Explorer mentioned, this morning there was a worldwide outage at Cloudflare which caused some issues for EVE players beginning at ~06:30 until ~08:00 - potentially resulting in possible disconnects, disruptions in secure.eveonline.com, the character sheet mistakenly classifying Omega accounts as Alpha.

These issues have been resolved by Cloudflare, and if there are any lingering issues that may have affected you please reach out to our customer support team.

CCP needs to demand some PLEX from Cloudflare people.

this morning there was a worldwide outage at Cloudflare

I demand compensation because I am

Maybe they can give you an in-game badge as compensation… or some unresearched single run blueprint or whatever.

some bid DDoS was going on world-wide.