Salutations, citizen of the Gallente Federation. 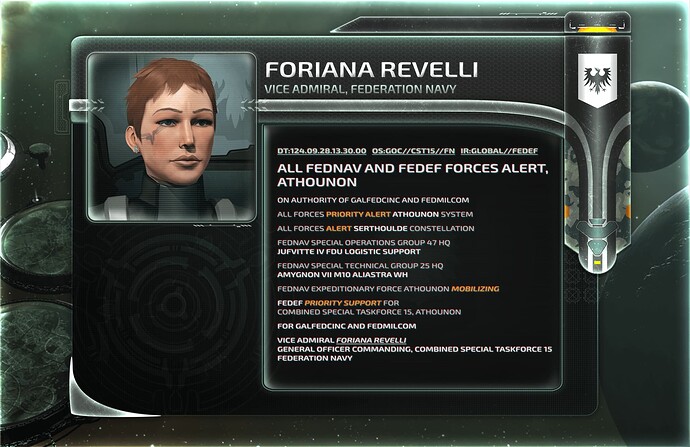 Activity started with flying towards the Athounon system via Maut, hostile interaction was low with minor engagements around the Caldari Complexes that reinforced State control of the system, reports show movement in the stability of Alparena and Reschard, how successful the land grab will be, only time can tell.

As time went on however, a increase in State enforcement was noted, with pirates and State militia alike starting to secure the Stargates and even oppress the Federation gate construction site turn in.

Federation Militia engagement and civilian mining efforts have been noted to be limited in reflection to Caldari numbers.

With no system control within the Serthoulde constellation, we lack suitable observation stations to find anomalies, needed to find the ores we require for Stargate construction.

Outcome:
As it stands, Caldari are pressing the advantage, doing well to harass mining sites and to close down on both turn in and Stargate entry locations.

Recommendation:
[//]Gallente Militia to pivot efforts towards the Serthoulde constellation, with a effort to capture the Alparena and Reschard systems, so that material logistics and stargate control can be secured.

[//]More dockable constructs to be raised in the theatre to allow for better refitting.

[//]Recruit into action the many brave and courageous Gallente citizens, with a specific interest to mine Dense Moissanite and to capture the Caldari State Complexes seen in Novice, Small, Medium and Large sites.

It is already pretty clear that without help the Gallente will most likely fail to build their gate.

If you were going to get involved in the bigger unfolding story, if you want to make your mark on the cluster, now is the time.

Remember when they said that about the Triglavians

Is this related to, or the start of, the proposed faction war changes? Thanks in advance.

This is a first hand account of the Serthoulde constellation from the Gallente perspective, as of today’s event start. TLDR, we need more Gallente boots on the ground.

Yes - this is the pre-expansion event, and CCP is using it to try out new things, such as limited time objectives for militias to work towards.