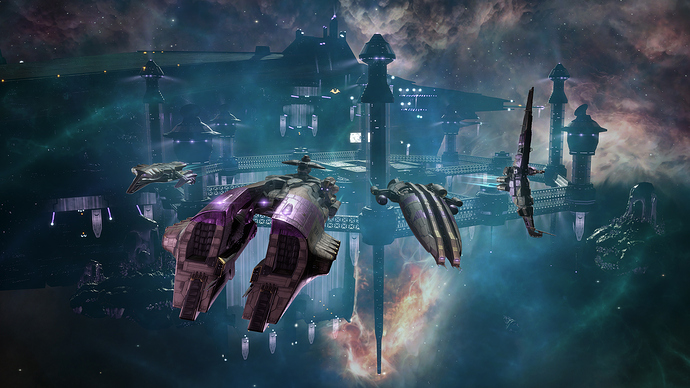 Please use this thread for discussing known issues.

The February release brings a whole host of quality of life tweaks to EVE Online, including a long list of “little things” as well as UI fixes, stability improvements and visual updates.

This release will also see the kickoff of a new event, as the Guardian’s Gala returns with improved visuals, more challenges and more diverse rewards.

You broke the preview picture of the Impel. It is now virtually indistinguishable from the Bestower because the black of the Impel is not clearly visible anymore. Both preview pictures are now the same dark golden hue. Needs to be reverted.

Guardian Gala event “Boss BS” may be putting out more damage than is intended. @CCP_Sledgehammerindicated on reddit that it should be less damaging compared to last time. 3000 dps damage does not sound like a nerf

I was aligned-out when it spawned, and that turned out to be a good thing. Many others have not been so lucky.

I have 2 notification feeds, but nothing is there … I can’t clear them, a relog will remove them but as soon as I undock they are back again

Seems they only show up in space, while I’m docked there are no unread notification feeds

Edit: This issue appears to be fixed, Thank you!

You broke the preview picture of the Impel. It is now virtually indistinguishable from the Bestower because the black of the Impel is not clearly visible anymore. Both preview pictures are now the same dark golden hue. Needs to be reverted.

Too much shading from the atmosphere in space…

I was referred here by a GM through the support ticket system. I am extremely disappointed to learn that the SP Compensation will exclude players who were not active before (in my case, a mere 2 weeks) the march 20 cutoff, and have consequently dealt with all the problems that arose, yet will receive no compensation. This is the second time this has happened in my case.
I’d like to know whether the timeframe will be extended to ensure all players who have been affected by the chat issues, are compensated appropriately.
It goes without saying the absurdity of setting an arbitrary timeframe which excludes many players who dealt with the same issues, yet will recieve no compensation…

this is still not fixed…
i wrote it before here: Move Plex to vault do not work

now i try it here, maybe it will be seen by some competent people:

Had this happen on two separate toons: game graphics quality suddenly switches to high when creating or opening a contract. I was then unable to switch back to my normal no-unnecessary-lights-and-textures mode through the menu. I want my potato settings stable, thank you very much.

Hello… my agency window is now broken only for the guardian’s gala…
I’m in suggested tab, have the event underneath the seekers investigation on the left column but when i select it the map side of panel is blank… earlier today it was working fine…

…so, i cant collect rewards from the event and free up new ‘challenges’…

It seems the event sites are no longer spawning?

Hi! I made an attempt to reproduce this and could not. Is it possible that you could first make this happen, then use the in-game bug reporter (press F12 > Report Bug) to submit a bug report? Feel free to put CCP Darwin in the title so it gets forwarded to me.

Is it? I still cannot see them although I logged in after 16:45…

Can you confirm that you’ve added the new group to your overview?

And I just relogged to check again. Still no cyno off grid.

I assume your observation might be caused by one limitation of our fix: Our live fix for cynos is only working for cynos, which are activated AFTER we applied the fix - old cynos are still broken, if they were kept active for several hours now. This fix should kick in when “turning it off and on again”. Very sorry about this.

CCP has to make the cutoff at some point. How would you determine what that date would be? What answers would you have to people unhappy with the date you suggest?