I have my EVE installation on a 2Tb SSD. I got a BSOD 2 days ago, when EVE was running, and since then, I have been unable to open the game. When I click on the shortcut and the eve launcher in the game folder, the CCP logo appears, but it does not open the game.

I have checked the drive and other games on the SSD open as normal. I have downloaded and installed a new copy with the same result. when I try to run maintenacetool, it does not give me the option to repair, but only to delete the installation. 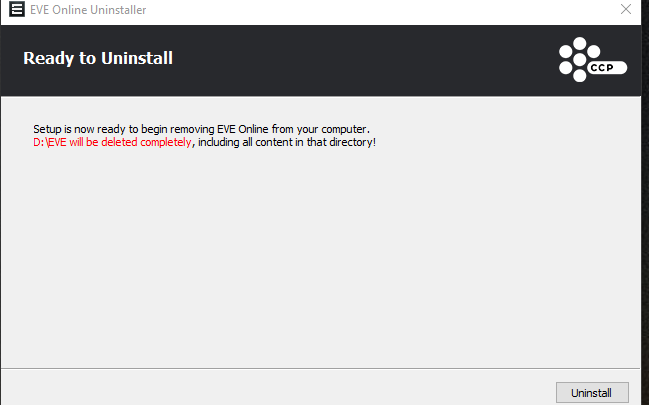 I have also tried installing the newly downloaded programme on other drives and still get the CCP logo only. The game does not appear in applications in task manager.

My ssystem is Windows 10.

Any ideas or workarounds I can try?

hello eve pilots and fans im a fairly old player trying to return to eve and im having a few issues with my launcher it says my system doesnt support direct x11 but im using dx12 my graphics card is intel 4 series express chipset family im thinking this laptop mite not run it!!
any help or advice would be great sure it worked b4

Have you tried the steps in this article?

Troubleshoot - Launcher starts but then closes or gives a dll error on start.

A recent update to the launcher caused issues for some users where old cache files caused the launcher to automatically close shortly after startup. Workaround Please press the windows key + R to ...

I’m encountering the same issue, and apparently these work for most people. However they haven’t worked for me, the launcher just refuses to open. Weirdly enough the game works fine on my laptop, but doesn’t on my PC. If you do manage to fix your game, please let me know

hello eve pilots and fans im a fairly old player trying to return to eve and im having a few issues with my launcher it says my system doesnt support direct x11 but im using dx12 my graphics card is intel 4 series express chipset family im thinking this laptop mite not run it!!
any help or advice would be great sure it worked b4

Wikipedia says that any gpu in the intel 4 series express chipset only supports directx 10.0.
Unless you have a discrete gpu in your laptop, the things you have written above can not be true and this is why eve won’t run on your laptop. It requires minimum directx11 nowadays.

So update, I managed to fix my problem. I went to the ends of the earth, reinstalling at least ten times, wiping my pc etc. In the end the issue was the latest NVIDIA graphics driver. I downloaded an older version from their website and voila, the game launches fine. Honestly hilarious how something so simple escaped my grasp for ages…

What a mad lad! I’ve spent over 8 hours trying to get it to launch!!! All i had to do was reverse my graphics driver from .59 to .40 version and worked. FINALLY after two windows reinstalls and tech forum exploration its done. Good find here.

I have tried almost everything. Restarting, new drivers for directX and graphic card, clearing cache in game and browser, deleting accounts and resigning again, deleting CacheStorage, deleting ‘Default’ from QtWebEngine folder, renaming CCP folder, verify integrity, fix permissions, starting from EVE folder as admin, compatibility is ok, tried launcher with different compatibility and all other exe files in EVE folder, system requirements are ok… Using loglite, which doesn’t work either (“LogLite server has stoped working”)… I have also tried new clean installation without any saved data, but it’s the same. Firewall is turned off. Win7 sp1 64 bit directX11. It was working on this same comp. until nine months or so with same drivers and settings…