Just wondering if anybody else has run into graphics errors while docked in the slightly jazzed up stations? Jita, Amarr, or the air labs, all seem to have this same issue.

I dont have any video capture software so cant really show it, but seems like a certain shadow is being rendered wrong and creating a flashing affect across all showy/translucent areas. quite a large artifact and hard to ignore as it has a strobe affect sometimes.

Using a rtx 3080, 4k resolution and full settings, win10, only happening since dx12 update, older stations and everything else like ships seem totally fine.

EDIT - unfortunately not isolated to what I thought it was, I was a bit ignorant of it but now im paying more attention, the entire fortizar is flashing with the same graphic error when i undock, only when super zoomed in though, unable to recreate by just looking at fortizar and spinning it around.

I have the same flashing problem when undocked from the Jita trade hub; I haven’t noticed it when docked.

I recently had the same issue. Light flickering in all stations, tough it was way more apparent in Jita. I always play with the graphics settings maxed, yet I found out that the Anti-Aliasing was turned off. I put it to “high” like the rest of the settings and it corrected the problem.

Nervermind, the problem is back. Now the Anti-Aliasing have no effect anymore. I also realised the flickering is happening in space aswel…

I have the issue pop up sometimes in space on my ship sometimes it happens on other stations i notice it inside stations, sometimes the flashing occurs when i left click. While docked in jita, if i left click those blue lines flash, its very odd.

Having issue as well on GTX 3070 Laptop GPU

You should try disabling the launcher from starting eve in DX12. It has solved the issues for me. Hopefully they resolve the DX12 issues soon

Medium Shader Quality seems to have resolved the issue with the station flickering outside, but inside now flickers. I reverted to High Shader while docked and the inside stopped flickering… what a nightmare!

I will try a few combinations to see what works.

Shadow Quality - Disabled seems to have stopped all flickering.

So i stopped playing for 3 months and this gfx issue is still here, maybe even worse, evry ship hull and station, inside and outside has this black flickering going on. Very anoying and makes me wish i didnt renew the omega it’s that off putting.

Havent tried disabling dx12, wil give it a go but assume a lot of the new gfx updates wont run on dx11.

I’m also having this issue. Even weirder is that it also happens when I click my mouse. All shadows in jita when docked turn off and on again. It makes zero sense to me, but that’s what happens.

EDIT: Ok, it’s 100% something to do with shader quality. When I put it on Medium, outside of stations shadows are fixed and not flickering anymore. However, inside will then be flickering bad.

Weird thing is, is doesn’t happen all the time. Sometimes when I return to station it’s happening, and then other times it’s fine.

EDIT 2: Ok it’s not just stations. Sometimes gates and - though very rarely - ships have the graphical bug as well.

Same here tried everything, so far it only happens in Amarr and Jita trade hub, everywhere else i seem to dock just fine without any issues. Perhaps a shader issue that started with the next expansion and revamp of citadels, etc…

I have been having this issue pretty severely and it doesn’t matter if it’s a new structure, old structure, etc. Lowering any 1 setting and lowering all settings do not fix the issue. Switching to DX11 is not a valid solution to the problem. It use to be that you could fix these by disabling shadows, LOD, etc, but this time it is different.

This issue must be fixed on a Developer level.

PS. The issue is not always present, it seems based on camera movement and the changing of Ad Billboards.

Same issue. Shader Medium fixes it, but that makes me sad. I hope you can fix this. 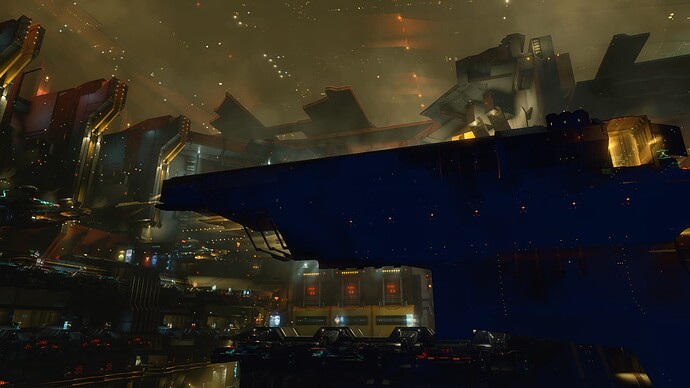 I’ve been having this same issue for several months now. Did CCP ever looked into this? At least put a seizure warning when you dock in station.

Same here on GTX 3060. Pretty annoying. CCP needs to look into this.

Same for me setting shader quality to medium fixes the issue , its so annoying come on CCP…

CCP devs let get this sorted its been months now

Add me to the list of people affected by this horrifying flicker. Happens in Jita, in regular stations, sometimes on the exterior of stations / gates.

Was happy to see a great long list of fixed graphical errors in yesterday’s patch notes, but alas not this one it seems.

As noted by @Steven_Nova , it varies with zoom level and camera positioning. It’s really strange!

On a GeForce 3060 GPU, latest drivers (although it was happening with older drivers too). Very standard gaming system!