Since we are dropping guides here, here is an up-to-date ore mining guide. It reads as a walk-through from your first ship to the Exhumers.

This is a guide on the basics of ore mining in Eve Online and what skills and ships help increase the overall profit from ore mining.

Nice guide.
I didn’t know, there were implants, that increase yield.

Great guide! A lot of good info to newbies.

That is a nice guide there, very handy for new players indeed. I also like the pages for the other aspects as well (ie: gas, ice, fleet, and bp’s). Nicely done.

You have excavators as normal mining drones, they are for Rorqual mining only.

You have excavators as normal mining drones, they are for Rorqual mining only.

Yeah, I can see how that can be confusing. I used the excavator as it was the most expensive, but I changed it to the Harvester.

Thanks for the feedback.

Please do not spam useful guide threads with off-topic comments, thank you!

Maybe add some of the Navs skills to the Guide, Evasive Manoeuvres is pretty good for miners .

Also might be worth while mentioning compression, since you can do it in a Citadel now its pretty easy to access and very useful to miners of all ages.

Sound interesting, i see later. I am writoing because the icon in your website say you are using hostgator, some problems with them in the past, Look EIG in google, and i suggest you change webhost provider if you can to stablehost.com as example.

Thanks for sharing these, they’re easy to follow and quite handy right now.

Nice guide, but I take issue with putting damage controls (or anything else other than mining laser upgrades) in the low slots of mining barges or exhumers.

Procurers and Skiffs can fend off half a dozen T2 armed overheating catalysts, even in 0.5 space, with just kinetic and thermal hardeners in mid slots and shield extender rigs.
Adding a damage control only nerfs your yield when you’re likely to survive most gank attempts anyways.

Retrievers and Mackinaws WILL die to just a couple of catalysts, even if you DO put all tank in the mid slots.
So, again, all you are doing is nerfing your own mining yield for no good reason.

Every time you put anything other than mining laser upgrades in the low slots of a mining ship, you are letting the pirates win, even if they never show up during your mining session.

Good product! I would like to point out that in your “Anti-gank” fits, they lack any sort of Warp Core Stabilizer. Anything can grab you and your stuck until their friends show up and finish you. One stab can give you a chance to get away, a second stab can get you out of a tight spot in case you’re caught sleeping at the keyboard.

You can ‘Tag’ the OP of your thread with ‘guide’ which will show in a blue marker when people view the threads listed in this ‘Industry Gameplay Center’ category as well as the ‘Mining & Extraction’ subcategory.

Retrievers and Mackinaws WILL die to just a couple of catalysts, even if you DO put all tank in the mid slots.

That being said if you fear gankers go Skiff, only reason I had a DC2 on mine was because the gankers had warped a scout to the Belt i was in so i refit the next time i was on station and laughed as they died when i was at 50% hull.

One thing it misses is how.to calculate which ore to mine. Many people miss ore volumes so believe Omber is a valuable ore to mine.

really bad guide.
jump from venture to barge… where is prospect?
nothing about orc-rorq…
nothing about merc…
no disclaimers like “Mining is stupid, unless you have Rorq”

Normal guide should show isk/hour for every ship,
so it will be clearly visible “Mining is stupid, unless you have Rorq” 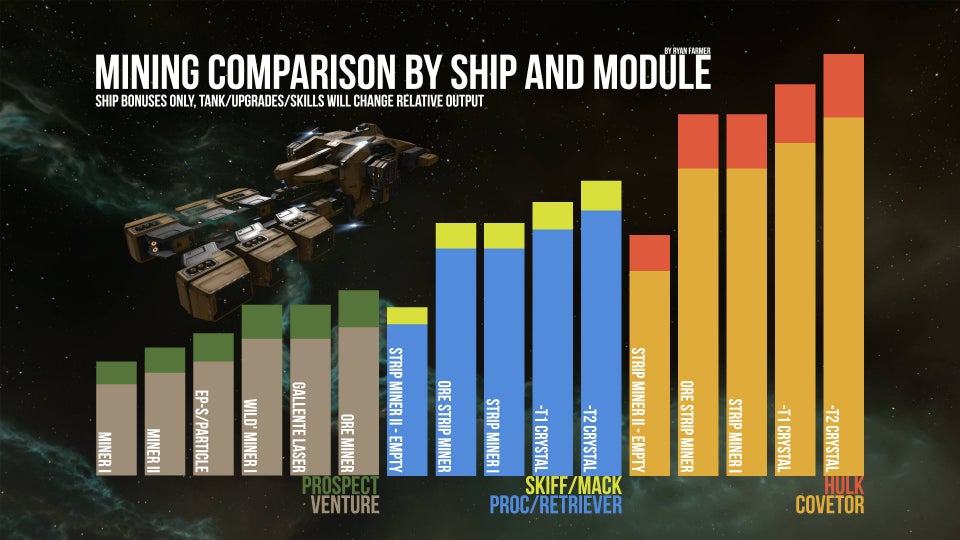 imagine you are in the null sec corp.

option 2 has much higher isk/hour
(also you can drop MTUs to get loot… to reprocess it to minerals, if you have that desire…)

I’m pretty new but I would assume these criticisms are rather pointless since the guide is 2 years old with no updates.