Trying to scale the recent Titan battles. What do we estimate as the number of Active Titans in the game. Active defined as will unlock and fight at Alliance level. Does the North and Goons have even numbers of Titans? Can one side replenish faster? 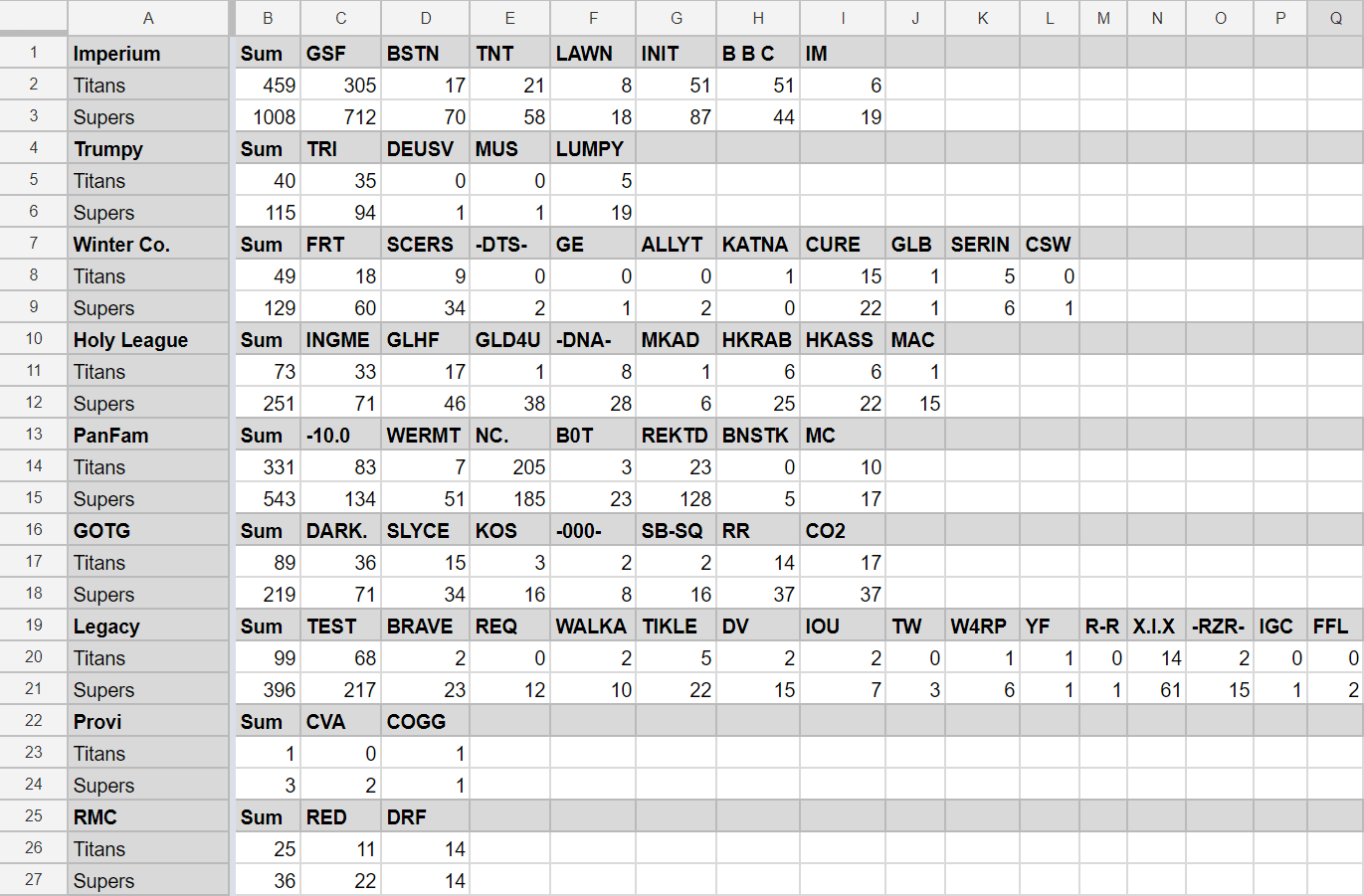 and after the last couple of battles, these numbers have changed even more in favor of CFC. Go figure. Totally healthy and enjoyable gameplay.

Don’t know exact numbers, but a rough estimate of how many Titans there are in the game it’s in the 5 digits (10,000 or more).

Thanks Provi has a titan lol

Do we think GSF Titans are more numerous but concentrated with fewer pilots? I.e An industrialist in Delve might have produced Four Titans but never field all Four.

The reddit thread this picture is from is about combat active titans and supers according to Zkill. In other words: there are at least 460 active titan characters in CFC.

Then the North needs a 3 to 2 Titan kill ratio and then to replenish as fast to break even.

Don’t know exact numbers, but a rough estimate of how many Titans there are in the game it’s in the 5 digits (10,000 or more).

Yep, this would be my guess as well (based on knowledge about the market).

Any ideas on production capability by Alliance? For Example CFC can make roughly 50 Titans a year

These days it’s quarterly. Industrial output with pretty much the only dependancy being that of provisioning.

Any ideas on production capability by Alliance?

Thanks to the Upwell corporation you make a sooper dooper mothership in 15d17h47m and a titan in 20d-ish.
And with all the rorqual bots, at blobb levels they are being made like candy.

Maybe Upwell can reduce the time and material requirements by 100%, so it doesn’t take so long for all the noobs to fly sooper dooper doopers, what could go wrong?

CCP could still make superweapon for fitting on cruisers that would act like superbombers for blasting Titans out of the sky. Would work specifically well against cap ships above Carrier class.

There is always solution.

Reading the thread title I was expecting a light bulb

joke about how many titans are needed to switch a light bulb.

Why does CVA have like 1 Titan, anyway the goons have been busy bee’s, got lotsa honey stored up.

They probably have more. CFC probably also has a lot more. The picture only shows titans active in combat according to Zkill, as said.

Last solid number was 6,500 and it was some years ago. It’s a ludicrously high number compared to how little often they die.

its almost like focusing on industry and infrastructure on a massive scale while protecting your borders and avoiding large scale conflict for extended periods is a valid and effective strategy.

lets face it, Panfam has never been good at adapting with the times. they are still trying to play the eve of 10 years ago when L33t PVPers could swing their big sticks around and a handful of good moons would let you print all the isk you could ever need.

times changed, they didn’t change with it, despite having every opportunity to do so. now they no longer have the biggest stick, so its gonna come down to if they still remember how to use it well enough to make a difference. (Because no matter how many noobs in titans goons have, PL at least in theory still has the most experienced cap and super pilots in the game.)