As one of so many who make Eve videos, I often find that during a fight I have recorded that I may have missed something important or missed an awesome cinematic moment during the encounter.

What I would like to be able to do is gain access to the ship 3D models and their skins so I can recreate missed moments and the like or heck maybe even make the occasional ingame stories of my own making.

In the past you could use TriExporter to extract ship models but that no longer works with the current CCP folder setup as far as I can tell.
As much as I have looked I can’t even find the folder the 3D models are sitting in.

So all that said, does anyone know how to properly extract 3D ship models from Eve and/or where specifically those files can be found?

2 Likes
Anyone know how to get ships model?
Face Rigs, Animation, and Ambulation
Is there a way to extract the Jita internal space 3D for artwork?
Netan_MalDoran (Netan MalDoran) August 9, 2017, 5:50pm #2

Yeah, there all in the shared cache supposedly but theyre all scrambled as its like a dynamic cache, I just spent the last week collecting stl files for all the ones possible, most of them are new, but some of them are still the old models like the condor and the caracal.
Heres my repository, got most of it from a guy on some other repository and then filled in the holes and updated as many of the models as I could and added a text file with the longest axis lengths for each model as well. 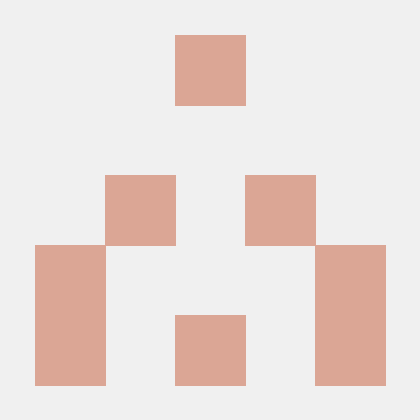 Contribute to EvE-3D-Printing development by creating an account on GitHub.

I’ll check that out when I get home.
Thanx

You need to point it to wherever your shared cache folder for TQ is - you can look that up in the Eve launcher, for me it’s C:\EVE\SharedCache\tq\ - and it will give you a list of all kinds of game assets such as structures, ships, modules, skyboxes and scenery. You can export the models and textures in .obj format, which you can usually get to work with about anything. The color schemes you can probably get as well, but if so, I’ve never quite figured it out.

according to t’amber, EVE’s textures are applied by the shaders, which might explain why textures don’t come bundled with the models in any recognizable form.

according to t’amber, EVE’s textures are applied by the shaders, which might explain why textures don’t come bundled with the models in any recognizable form.

They do come with the models in recognizable form. Eve uses physically based rendering, and you get what you’d expect there: albedo, roughness, normals, along with others like dirt, glow, material masks. The only thing that makes those textures look a bit odd is that CCP is cramming multiple textures into a single image file to save video memory. Except for some capital ships, each ship uses just 3 1024x1024 pixel image files as textures (not counting decals, those are separate, and they are a major pain in the arse), but into those 3 files they crammed 8 different textures. When you extract the models, you will find textures called _AR, _NO and _PMDG. _AR has the albedo (brightness/color) texture in it’s red, green and blue channels and the roughness (“glossiness”) texture in the alpha channel, _NO has the normal map (fake geometry) in its green and alpha channels and the occlusion texture (fake lighting) in its blue channel (if memory serves, this one is especially weird), and _PMDG has the paint (little details like hull markings) texture in red, material (which material goes where on the hull) texture in green, dirt texture in blue and glow mask (where the lights are) in alpha. It’s all there, you just need to figure out how to juggle them around and make them usable outside of the game engine.

Okay, I think this is a difference in semantics.

Well the trick then is finding where all this is on my computer.
Thought I went thru every possible file folder available.

Open the eve launcher and klick the button with the E at the top right:

Select “Shared Cache” and a new Window will open: 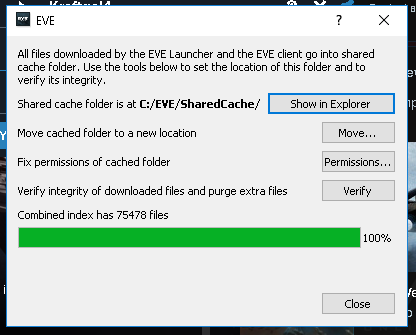 Where it says C:\EVE\SharedCache\ for me, it may say something else for you. That’s where you need to look. In that folder is a folder called tq. Once you have found that, open TriExporter (it needs to be the fork I linked above with support for the shared cache). Go to File -> Set folder… and point to afforementioned folder.

Once you have done that it will list all the assets in a sort of directory tree. You can find the ships in res:\dx9\model\ship\ <faction>\ <class>\ <hull type>\

I typically export the whole folder as files (right click on it -> save folder). It contains the textures and some other stuff I don’t know what to do with. Then I double click the ship model itself (that’s the .gr file) and it will show me a preview. Then go to File -> Export model, and I save it as .obj, as I can easily import it into Blender, but other formats may work for you as well.

The shader is a bit wonky at times, but it kind of works nonetheless. I have a better version by now, but I have been too lazy recently to clean it up and release it because :effort:

Awesome! I have been wanting to try doing an EvE ship on my CNC router. Thanks for posting these!

Ah thanx so much.

there is a program called pepakura that will take a 3d model and generate printable cut-out sheets of it. You can use those to assemble the model.

I was thinking of printing the textures and covering the model once built. Would Pepakura work for that?

yeah it includes tabs in the prints and all you have to do is cut and fold. Applying the textures would require unpacking them from the ccp format and applying them to an fbx possibly

Am I missing the executable for triexporter, or do I have to compile this all myself? 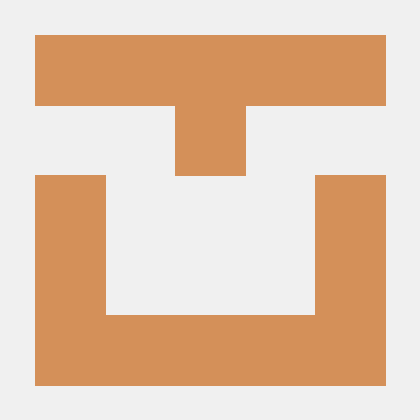 Hi, @Neuntausend, I use since today the standard version of your Blender shader but I have no success with it. see screenshot. Do you have any tipps for me? Thx Chab

So I figured it out now. It was the false renderer. Now it works fine. Hope you have time in the future to release your new version @Neuntausend.

by the way, great work so far. This is exactly what I looking for.