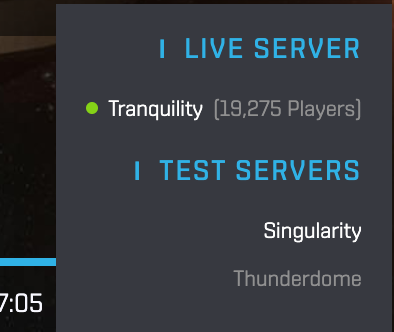 Also I see a old forum post about everything costing 100 isk but I dont see anything priced at 100isk and they still cost a lot.

also when will singularity mirror again? Is there a set schedule or something? Please help me I am confused, and cant find any useful information online. thanks.

edit: also if I want to test out a pvp fit with my friend on singularity how do we do that? because I can’t even see if he is online or not. thanks.

Is singularity just the same as the normal server? if so why dont I see any other players there?

Server will be mostly the same, but as it is a test server it will usually have patches that are not on Tranquility yet.

You can use the /moveme command to teleport to a list of systems. You will likely find some other players in some of those systems.

edit: also if I want to test out a pvp fit with my friend on singularity how do we do that? because I can’t even see if he is online or not. thanks.

You can form a fleet with him and both /moveme to the same system.
If you cannot see if he’s online, I suggest using an out-of-game communication tool.

Here is some more information on the test server and the commands you can use:

I can’t even see if he is online or not. thanks.

You could coordinate with him using Tranquility and then both of you switch to the test server. If you meet him in the same system you will see him in local. Also normal chat works in the test server, so you can start a conversation with him.

everything costing 100 isk but I dont see anything priced

Most items are seeded for 100isk on the market for testing purposes. They are seeded on some NPC stations, but not on every single station - scroll through the market window and check other NPC stations in your region and you should find it, or try a neighboring region.

also when will singularity mirror again?

There is no fixed schedule. (well none that CCP has made known) They usually seem to mirror it once ever 3 or 4 months. However, the mirror also happens sooner and at other times - when they want to test new features, mass test, etc.

the last mirror was in february, so its very likely sometime in mid to late May the next mirror may happen, unless CCP needs it mirrored as mentioned above.

okay thanks everyone, it was my careless mistake. I didn’t check it thoroughly and thought singularity was not multiplayer. Based on your responses I managed to get it working and I also met my friend on there to test out some stuff. Thanks everyone.

just one extra thing: is it possible to buy skill injectors or skill points / train skills on singularity?

You can buy PLEX on the market for 100 ISK each, which you can then use in the NES to buy packs of extractors.

That way you can shuffle your skills around easily, if you already have the SP. If not, you can maybe find someone else who is willing to give you their SP, like a corp member who doesn’t use the test server at all.

Just a note, to be entirely clear:

Progression on singularity is wiped every so often. It’s not a server to play one. It’s a server to test on.

You probably know this, but I’ve seen the occasional person complaining when what they’ve built up there goes away.

okay got it, I think I got everything working now. thanks