Currently you can only retrieve that information by hovering over the 3 meters on top of the capacitor. 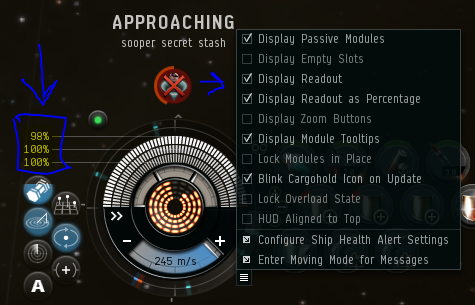 Every module has its own HP % based on how much you’ve overheated it and adjacent modules (this is how passive modules can become damaged via overheats). There is no meaningful way to capture overheat damage of multiple modules, each of varying degrees of damage, with a single number.

The % heat for the entire rack is used in part to calculate how much damage an overheated module will receive.

If the rack heat is low the chance of high damage is low.

Hence why this would be useful, otherwise I have to hover over those 3 bars on top of the cap to find out my current heat level for each rack.

There is a meaningful way to read the current rack heat level, hover over the 3 bars on top of the capacitor.

Interesting. I had to read up on this. I was not aware of this mechanic; I had incorrectly assumed it was just an “average”. Well, the rackheat could go as a % in parentheses next to the HP (which is listed either as actual quantity or as a %).

It’s not a bad proposal

Well, the rackheat could go as a % in parentheses next to the HP (which is listed either as actual quantity or as a %).

I hadn’t given much thought since UI isn’t an area I have much experience in, but that sounds good.

Originally I imagined something like an either/or. For example you would be able to show % for HP or show % for the 3 heat levels, both would be in the same place highlighted in original picture, though unable to show both at once.

TIL you can show as a percentage