So im looking at this manufacturing job that has 58 minutes left at the time of writing, but i have the time right now to actually work with it. Its some ammo that i need to convert into faction ammo so i can sell it.

So i thought do i really just have to wait 58 minutes? Is there nothing i can do to speed it up?

So why doesent EVE have a “Hurry” option that can shave some time of the job? Why not implement such a feature? There are many different ways to do this. These are just off the top of my head.

For example if its a batch of ammo, i can hit “complete” and i just get the amount that is done…

Or i could pay x amount of ISK and the job completes.

Or maybe it should just be something on a timer, so you only get the option of “Hurrying” x amount of times per week. There is still many more ways it could be done. 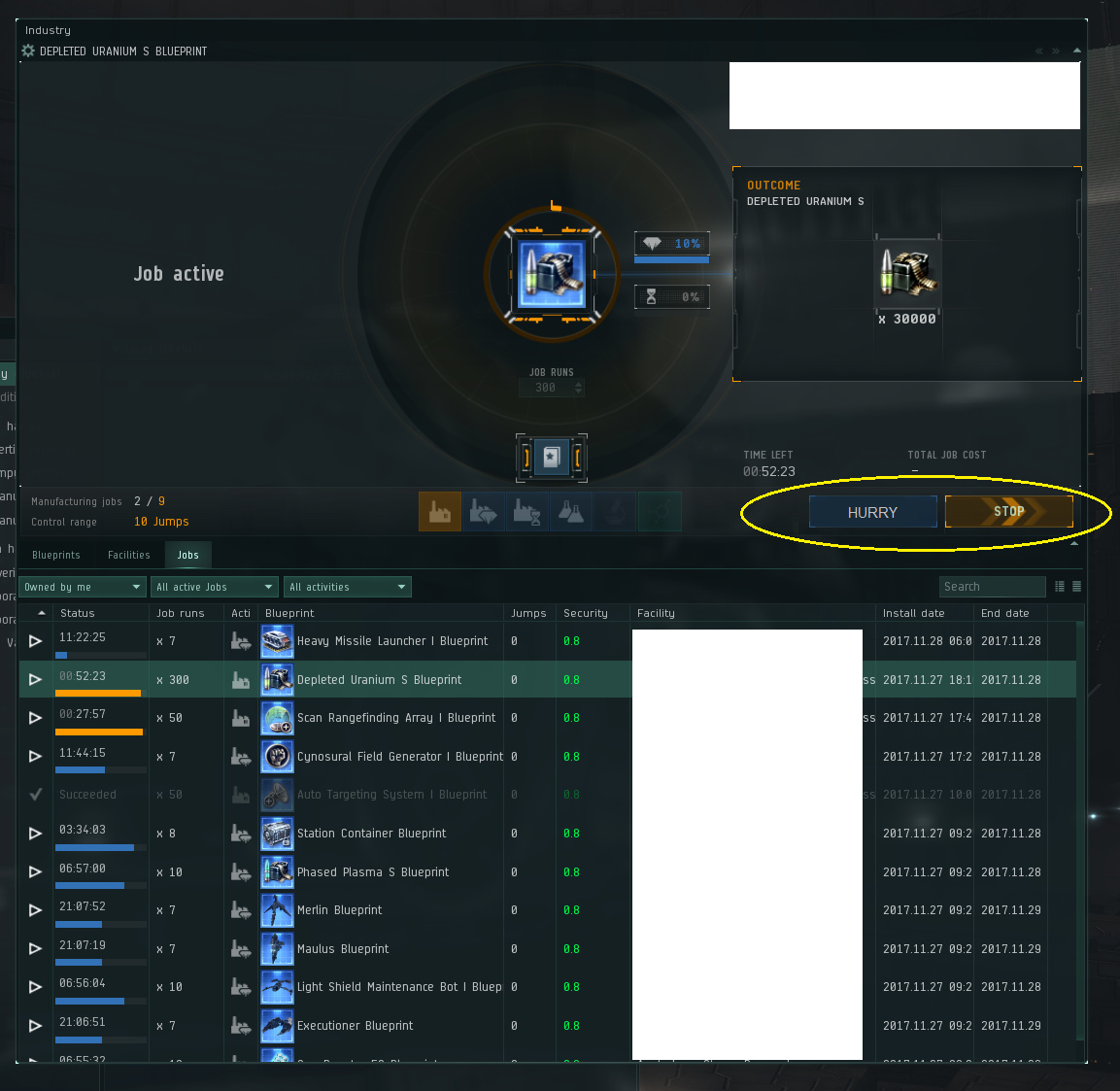 My Civic isn’t put together in an instant just because I told Honda to hurry. This sounds like a complain change rather than a necessary change to gameplay.

If your only complaint is a balance issue dont bother complaining. Balancing is a non-issue. I even gave examples of how it could be done. You probably didnt even bother to read it. Just filthy scumbags and haters as usual in this section of the forum.

You have. Its called Overload.

Perhaps if your Cit modules took heat damage from the Hurry action this might be a workable idea.

right, so, fixing the damage, paying for paste, or replacing the mod, is not an isk cost…

Makes perfect sense to me.

Which means another downside you want to ignore: carrying paste.

You just want to use isk as the equivalent so you should have the same drawback.

I mean, if you pay full price to run a manufacturing job, then cut it short (if that were to become possible), I would think it is like any other real manufacturing job, where, you already sunk the money, and now you just get less of the product. For things like ships, this results in them being say, 99% armor and 99% hull damaged, and for things like ammo, it amounts to receiving say, 75% less a time percentage of the total order.

Cost effective, most definitely not, but if people want to rush, I see no problem in letting them waste money on doing so.

So, another “If you dont like my idea, go away” with insults post as usual in this forum.

What you need to do is plan your job starting point so you can get it when you want, maybe do fewer runs, maybe do more, maybe use more slots. You are not restricted to a window when you start it, use it to your advantage.

As an example they gave you, you are not going to receive half a car because you are in a hurry and want it NOW.

So, I’m in a Rush and I bought a damaged car instead of a new one for the same price. Sounds reasonable…

Machines can only move so fast… if they could hurry, why would they not always operate at that speed? There isn’t a manufacturing sector out there that will willingly operate their equipment beyond specs to get a job done faster - the cost to replace the equipment is well in excess of any surcharge gained.

OP, your “hurry” option is called “buy the damn thing off the market.” EVE has enough microtransactions as it is. DONT add more out of place ‘features’ that belong in mobile and facebook games.

The idea itself is stupid but using plex to speed up manufactoring a little might be a next step how to fund eve (especially when new alpha is coming and we can expect that lot of players will stop subscribing sooner or later).

Ehm, tethering?
Overheat damage repair is free, if you are smart about it…

Why would you expect alot og players to stop subbing?
You still need a sub for proper manufacturing, proper resource harvesting and PI, all the t2 and t3 ships, almost all t2 modules, everything capital and everything corp management.

If you wanna fly t1 sub caps, with t1 modules and small/medium t2 weapons or be an f1 monkey in nullsec, sure you dont need to sub.
But you need to sub for everything else in the game.

In all seriousness though, an option that allows you to modify your jobs might be an interesting idea. Like industral decrytors or something.

It could be another Isk sink, pay to increase your manufacturing speed by X %, to simulate hiring more people to work for you, for a short period of time.

Perhaps it can involve PLEX?

Can we get the ISD to make a bot that biomasses all character proposing ideas in and around pay to win thingies? That would be glorious!