I need your help to get some ideas for a book

Greetings fellow capsuleers,
Im currently writing a book based on the EVE-Online universe.
I havent got a name for the main char yet and i need some ideas for what his job was before
he became a capsuleer (he obviusly needed to finance becoming a capsuleer)

He is Amarrian from Sarum Prime VI.

I had the idea farmer/farm owner as his original job bcs amarr is famous for theyr not gen-modified wheat but idk if thats enough cash to become a capsuleer.
And i dont know what other jobs there are in the EVE-Universe for the non capsuleers lol.

Would be nice something related to stations or crew from a capsuleer ship, so he get some aspects beforehand about capsuleers .

do capsuleer ships even have crews?
I thought like the ships are like the “body” of the capsuleers

Oh ok lol.
but what is the use of the crew if the ship is literately controlled by the mind of the capsuleer

Capsuleers controlled ships use reduced crew compared to standart ships, but they still need some crew

That is the feeling from a player perspective, but not lore wise. Lore wise capsuleers ship are way more agile to respond to commands, etc, and require way less ppl

I think i got an idea for a job now.
hes like the dude who controlls who undocks and who docks.

what do you call that

Make your character a female. Name her Ramona. And make her a one-eyed dish-washer.

EVE Online Amarr name generator. 10,000's of names are available, you're bound to find one you like. 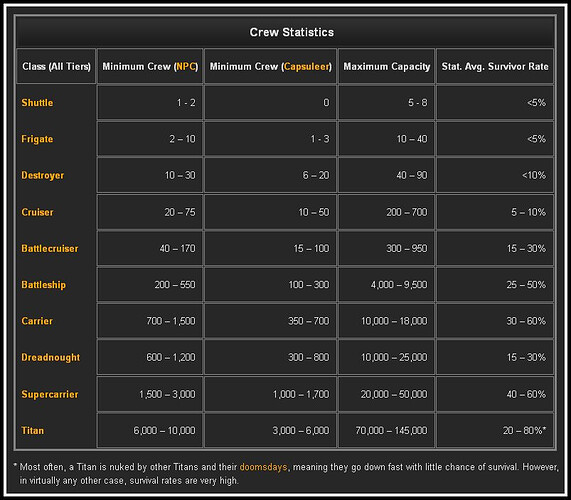 This might be helpful. Via Bing search. “EVE Online Ship Crew Chart”

If you’re not keen on cycling through names in the character creation section or the fantasy name generator, you can try looking up names of Christians in the Middle East and Caucasus. Armenian, Georgian, Assyrian, Coptic, etc.

I havent got a name for the main char yet

Zaera was a Mattress Yacht Girl who bought ISK with her daddy’s credit card to finance becoming a capsuleer. She is a scammer from JIta, part time spy, ganker, escort and pirate, her favourite prey being goons and wealthy bears with more sense than money.

Her hobbies include popping miners. ganking fluffy bears on the forums and generally being awesome like her hero @Githany_Red

Yeap, a crew in the Amarrian empire would be cool, specially because there’s Blood Raiders and Sansha Nation around and the crew are terrified about the idea of getting kidnapped by them… in fact those two pirate factions want to kidnapp people alive which leads to boarding ships and gunfights

Blood Raiders will want to kidnapp powerful people for their blood rituals, so being in the crew of a powerful skilled pilot increases your chances of survival on space but also will attract Blood Raiders, it’s a two edged sword

Sansha Nation will kidnapp just anyone afaik, since they just want more slaves

Not everybody is a capsuler in the EVE universe, it’s like the 1% of the 1%, very few people are capsulers who are immortal or almost immortal because of clonning

Make your character a female. Name her Ramona. And make her a one-eyed dish-washer.

That’s no way to talk about @Ramona_McCandless lol.