I read this article recently and thought of the EVE community 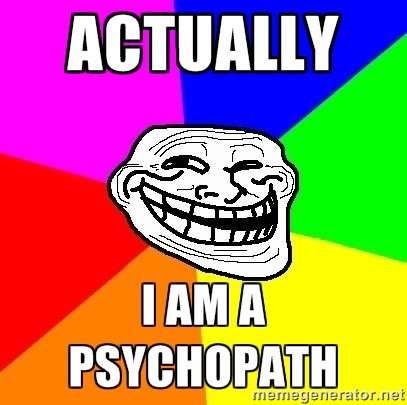 Trolls are susceptible to sadism, psychopathy, and Machiavellianism.

You have to wonder how the whackos of society are represented in video games. I would guess their social lives would be marginalized to the forums of video games because nobody can stand them IRL. Considering EVE is a video game that arguably provides a safe space for sociopaths. Are these types over represented here?

I have never heard of another MMORPG where both developers and players would create campaigns aimed to help the depressed/suicidal.

If anything, EVE community’s problem lies in too much empathy. Unless it’s all just virtue signaling, of course.

I’ve generally found that in EvE people troll as part (and only as part) of the game, whereas in most other online spaces trolls are just inadequate cockwombles.

Another thread about how EvE players are big meanies. Good. Always makes a change from cloaky camping and ganking threads…

I will direct you towards a reddit post describing an EVE player’s visit to an ARK PvP server wherein all the inhabitants had made peace. Unsatisfied with the state of things in the server, he decides to start “terraforming”. He becomes an enemy to everyone on the server to generate content, and his victims never really appreciate what he’s done for them. It’s a beautiful portrait of the quintessential EVE player.

r/playark - The spoils of playing on a "friendly" PVP server. AKA how I became...

Yes I have spent a lot of time in Broadcast4Reps, there are many good people who play EVE. There are also complete jerks playing any game, the fact that some people are terrible is a fact that exists outside video games, then just gets brought in when people play it. Some only do it online because its “safer”, which really just means they are cowards.

Most people trolling in EVE are doing it as part of the game, ganking, scamming etc. are often done in hilarious ways just for fun, and some people even reimburse the victim after just because they were looking to have a laugh, not be cruel.

I think what is best to say about the EVE community is that it is very diverse. Some people are nice, like Mike, some people don’t care about the fact its a online, and just solo it up in high sec, some like farming salt like CODE., wormhole people, and Judge. It is the fact that only the stories of someone screwing their alliance are the only things that people hear about.

Reminds me of my time in Aion like a decade (?) ago. “Biggest Elyos [long list of insults] running around” they called me, while running away. It was a heavy Asmodian server. Must say that I had fun.