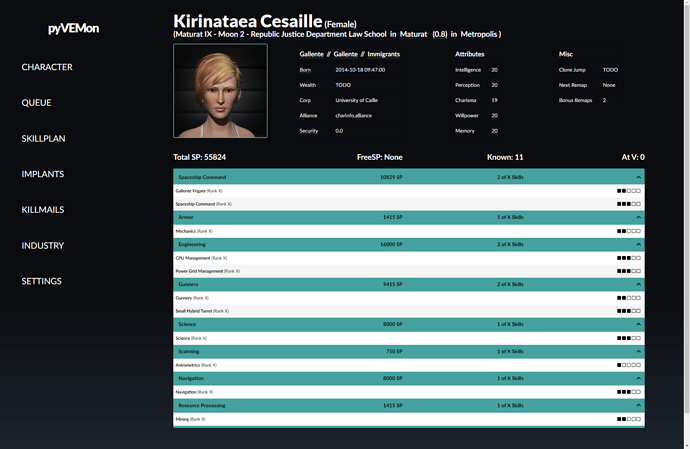 This is a full size screenshot of the tool I am currently making. It is written in Python Flask and when you launch it, you basically just have an icon in the systray. Clicking it opens your browser with this site.

For the more technical inclined: It runs in a wsgi server, called cheroot, which is also a dependency of gevent, with 3 threads. Frontend, a Backend that updates data from ESI and a worker thread that makes the backend get new data once in a while. The footprint is quite small, the frontend rendered at the moment with 3 database queries and 0 Javascript.

Let me know what you think about this. And yes, this is live data, except for X signs and weird names. 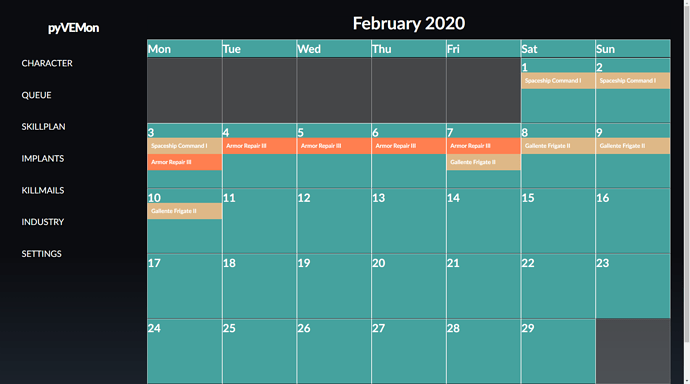 Just added the skill queue as calendar. Just a first concept, but I think it comes out quite nicely.

Well, I like the design. Looks nice and clean, and it’s dark enough that I don’t feel like my eyes are being assaulted by a blinding white screen (I keep my mancave rather dark).

Thanks, that is high praise. I am working on it since 2 weeks and I hope to deliver a first version soon.

Cool. I’ll definitely check it out.

Implemented character selection today for all those people with dozens of accounts.

You know what, I have some suggestions. I have enough toons and accounts that I have to use a spreadsheet to keep track of them all (i.e. when is Omega status or MPTC’s running out). I don’t know how hard it would be implement any of this stuff, but it would be nice.

Anyway, I don’t know why you’ve gotten so little attention. You seem to be moving at a quick pace, and you’re actively asking for feedback. I can’t believe I’m the only one with a wish list.

I’ll link this thread a few places. Maybe it will get a few more people interested.

Wow, good feedback, thanks. Right now I can move fast, because I am in between jobs

. In 2 weeks the world is different and I have to slow down.

Omega status must be somehow possible, because EveMon does show it correctly. I don’t know yet how.

Arranging the toons should be possible as well, I have already something in mind with drag and drop, I’ll revisit the front page when I do the skill planner, at the very least I can do an order in the database that can be set up in the settings menu. So it is definitely not a big deal. Adding an option to show unallocated SP on the avatar shouldn’t be too much trouble either.

Right now I am rewriting all API requests, so they are more robust and reuse the Etag, so CCP does not have to buy new servers on my account

Hey bro, I posted about this thread in couple of places, and a few third party devs gave their two cents why you weren’t getting a lot of feedback.

This was straight from one of them.

Another also suggested posting in the Eve tech redit

Maybe interesting for you: From what I have read, is that the endpoint where you can query the Omega Status is deprecated since 2016 and shouldn’t be queried, because it is unreliable. It is also in the old XML CREST format. So as long as CCP is not pulling it over to ESI, there is little chance for a reliable function. That is probably why EveMon has the “Force Omega/Alpha” Option. But it is still some time before I can release, so I am going to worry about it later.

As shipwreck mentioned, what is the point of this app? I see technical jargon, but idk what this is.

I didn’t want to say I am making a new EveMon until I can say it can compete with it. Sorry for that. It is basically a new EveMon, or at least supposed to be. The key difference is, that it runs in a browser. It can either be put on your own web server supporting Python (preferably a Pi or something at home) or it can run on your own computer with a light-weight web server in the background. You can then use it in your browser and if you activate a setting, basically in your whole network on any device. That is the idea at least.

Are you planning to put it on github? Would recommend it, so people can see for themselves that your app does not secretly leak personal data etc. Some people might also volunteer to help maintain your app and work on features.

Thanks for the praise.

I just want to work out clean fundamentals, before I put it there.

I have spent the last week basically re-making it from scratch, using SQLAlchemy and other things to make it more robust, which is why I have to rewrite all database queries and commits. The HTTP requests are also a lot more stable now. This is a bit of a setback in progress, but it was very worth it.

But anyway, here is a small teaser site with links to the (upcoming) Github: https://pyvemon.tuxstash.de/

I am not sure at what point I want to release, but probably when the skill planner works reliably. So at least people can do that. Then continue with the rest on a rolling release.

Thanks for teaser link! I am looking forward to the first release.

Btw. I am part of the development team for Alliance Auth - a Django based website for managing alliance apps and services used by many organizations in Eve. We are always looking for Python developers to help us with our open source project. So, if you are interested to dabble in Django let me know. We also have a Discord. 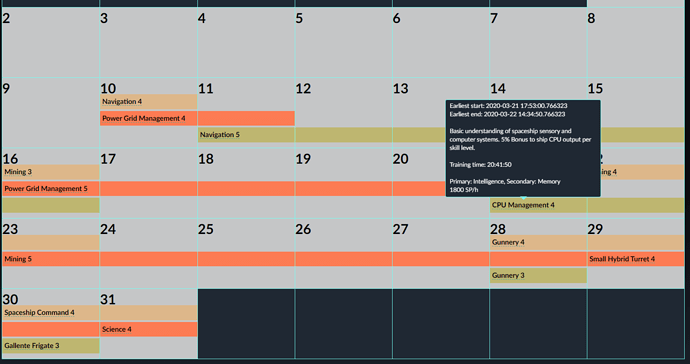 Finally got the skill queue calendar down. Was a bit of a monster, but it is done.
This is now dynamic api data.