Ideas for player FOB or FOT

Very soon in CCP’s timeline there comes a update where they get rid of the POS system entirely. Now I do think this is a good thing. They added a mass of structures that do very different things, and are soon adding structures that will make the POS obsolete, or will they?

Lets start out by counting what the POS provided. Industry, Moon mining, shelter, defense, and navigation. All of these are now accounted for, but a bit lacking in two of the services, which are shelter and defense, which I will explain.

In terms of shelter, upwell structures have done great. There is now widespread docking of supercapitals, capitals, and the tether system is great. There has never been as much safety as there is now when to comes to ship theft. But there was a few things that made the POS great. How cheap it was, and how useful it was.

In EVE the only way to dock a capital is a have a Fortazar or larger structure to dock in. This means you have to spend 10bil or more just to have some place to park a 1 billion isk hull. This is a burden to small corps, and not only that, but in wormholes, it would mean you would need to place down a Fort to safely dock every system you stop in, since you are still vulnerable for a short period after you log off.

So this is where I propose the Forward Operating Base, or Forward Operating Tower. This structure was mentioned by CCP before, but gave very little info on it. This structure would fall under the small class, but at the same time, have S,M,and L variants. Small would be able to hold medium and small ships, Medium would be able to hold medium and Large ships, and Large would hold standard capitals.

Also, the ships would not be inside the structure, they would be anchored to it. Almost like this old picture proposed back when citadels were first being developed: 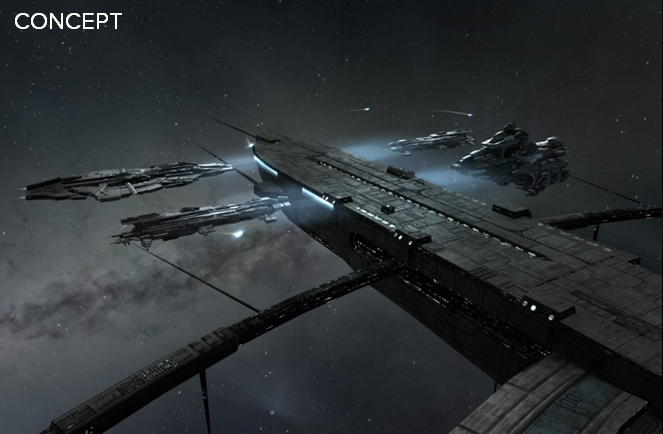 The way these would work is there would be a shield, generated by the main tower, which could look something like this:

If the shield is up, everything inside is safe, much like the old POS system, but there is something different. There is no vulnerability, Only 2 “windows”. During shield, there would be a very complicated hack, followed by a attack on the shield generator. Once those two are completed, there is a 1 day wait, then the shield comes down. Then they can attack the structure, which would include any ships anchored to the structure. This leaves only 1 day for the defense.

The tower would come with new weapon types, and yes, structure guns. 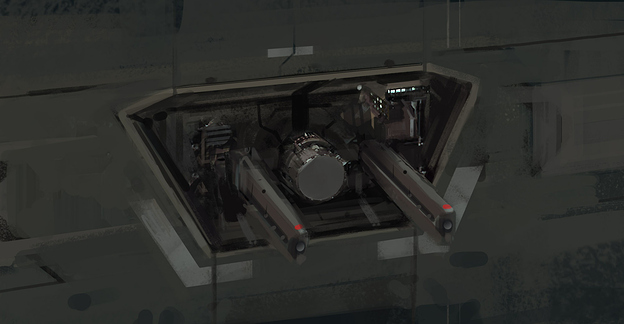 The new weapons would be ammo based, not scripts like laser weapons, which would increase the cost of defense. What would be special about these weapons is that they can transform based on the needs of the target. If it is a capital target, then it can combine into one large cannon. If it is subcap, it can split into multiple. If it is short range, the barrel can shorten and widen, while long range would narrow and thin the barrel. These would not be able to apply to citadels. These would have 3 missile slots, 4 gun slots, and 1 utility slot.

Also, theft in EVE online is a large part of the game, so I want it to be possible to steal from these structures, but at the same defend against theft.

For the guns to work, unlike the old POS system, the station will need to be manned. Also, these towers would have a set of passwords that can be set by the owner.

Instead of roles, these structures will mostly rely on password, making it easier to steal from if you somehow get a hold on these codes.

To get in and out of the towers shields, you would need a password. To get out, you disable the shield for 1 minute, and to get back in, you do the same. This would provide interesting content, because the tower and the ships anchored inside can be attacked or raided for 1 minute till shields go back up, so be careful and make sure you can survive until the shield comes back up.

Your ship anchor can also have a password if you choose. Controlling the towers defenses also requires a password. If you have a password to the main hub of the tower, you can also choose to lower the shields, and unanchor the ships, and detach the cargo containers, if you want to steal from the corp, making it so you have to trust who gets passwords.

When it comes to defense, I also want these structures to have a purpose in nullsec and lowsec. Remember “Death Star” POSes? Well, these structures would have 8 high slots, used for weapons (The new weapons would vary in size, small would go with small structures ect.). They can also deploy fighters, and have ECM in the mids. The lows can be used for tank or more damage. These structures would not have any service mods, only anchor and shield, but offer some customizability. The 8 slots also limit how powerful the tower can become, making it killable.

I want these structures to almost feel like ships, massive tools. To expand the capabilities of this structures, I want it to have a new mod, known as the Siege Defense Module. This would take the towers shield down, unanchor all ships, but increases the DPS and Tank of the tower by insane amounts, taking in from a boat dock to to a bunker, in the matter of seconds. I have already stated some of the downsides, but another downside will be fuel.

The structure will require fuel blocks to keep it online, but during siege mode, the structure will swallow up so much stront and ammo, that it will cost hundreds of millions per hour, so you have to use this to your own risk.

I want these to become useful for region and structure defense but at the same time be balanced. I want them to be able to sit 100km from gates, but fuel cost will keep them from being used at all times, only during important defenses. Same with structures, but maybe make it so the number placed on gates and stations are dependent on SOV, which would mean that they cannot defend stations in WH space or Lowsec, keeping them from being OP.

To online this structure, it takes 12 hours, to take it down, it takes 12 hours. Fully fitted, I want the the structures to be low in cost. 500 million for a small, 1.5 bil for a medium, and 5 billion for a large. When it comes to size, they need to be feasible for wormhole space, where a few ships can collapse a hole. That’s why I want to implement a construction part to it. Multiple ships would need to carry multiple parts. The large should be able to fit in the fleet hangar of 2-3 dreads or one freighter, the medium should be able to fit in a few battleships, and the small would need to fit in a few cruisers. Once they find a spot, one ship would deploy the foundation rod, then others would build there parts onto that, allowing for customization kinda like T3 cruisers, and maybe this could expand into future into other structure types.

All modules, dps numbers, tank numbers, and cost are up to CCP for balance reasons.

Tell me what you think!!!

Oh and those of you who want to have a “Customized Home” this could be a platform for you.

Yes, but you are still in space for a short period after you log. Also, you cant switch ships without having the other one floating in space.

If you stay logged in the ship doesn’t disappear my guy.

lrn2play is all I can say at this point then.
you dont understand current game mechanics.

Okay, even if im wrong tho, you still cant switch ships.

I regard the inability to switch capitals without a fort as a good thing. At the point you are switching in and out of capitals you should be investing that much in infrastructure

So my basis of the idea is that in nullsec, it should be a defense structure, and use its guns for attacking groups coming in if it is a threat based off of SOV, but, in W-space I want it to be a day tripping structure, almost like a tent IRL. The guns are for defending only. It is built that if you want to stay in the system, go ahead and put citadels down, but say your going down a C5 chain collapsing every hole behind you, and you need to park you 2-3 dread fleet for the night, then put down this structure and park.

Or just refit your cloaks, find a safe each, and safe log. Log back in and cloak then rally up.

But, say you need to dump your blue loot are go get more ammo, you cant switch out your ships. Like I have said before, these have more than one purpose to fill.

Honestly, I am a fan of the system. Depending on the Structures size and HP, this could be a nice beginner Structure for smaller Corps to begin their journey in space, allowing for a base of operation without a very expensive structure.

For my part I don’t even think that the Capital part is too important, but having a small-scale base to just secure your ships in can be gold for a small group or new players.

New players don’t have to protect alot and are still finding their place in space and high mobility Structures are nowhere to be found. While reading this I was thinking of something that would be in size in between a Mobile Depot and Small POSes, so while having not alot of HP and attack power, be something to start ops out or just secure your loot without having to safe log in space or go to HiSec for that.

I do very much believe that these structures would have a future in the game and would find alot of use. Ofcourse this is just an idea and it needs tweaking, but defnitly a great start!

The capitals are useful for wormholes where you cant jump and stuff.

I have idea what services player Forward Operating Base could offer. FOB would offer support for sub capital ships.

Comments are welcome for my idea.

This is a good post. Commenting in here so I can remember to bookmark this later. +

Really good idea the pinning of ships could be rough to do but love the rest.

I’ve always felt that the eventual removal of POS, combined with the need to put up a Fortizar in order to store any caps (and a Keep for supers), really hurts smaller groups - at that point, the biggest entities can build themselves up with a far larger divide between their capabilities and those of smaller groups of players.

i.e. before citadels, both large and small groups would need a POS, which were all much cheaper than setting up and operating a Fortizar - now, and once POS are totally gone, the divide between those able to afford the necessary infrastructure and those who can’t becomes much broader.

There should be blueprint copies for faction ammo so you can manufacture more ammo in null sec space. Dream is that you could live long time in null sec without getting resupplies from high sec.

This answer was continuation for my earlier reply.