I'm having a problem

Structures is the lingo for citadels etc

I’m not sure I understand. What do you mean by starbase?

Before citadels, POS generally referred to players launching a “control tower” and using that as the anchoring point of a bunch of different arrays or modules to build a starbase. Which was used for research, manufacturing, etc.

POS was also sometimes used by players as “Player owned Structure” which is how Customs Gantries end up in the confused mix. And “Structures” could also mean the arrays and items anchored to your Control Tower.

Citadels/Upwell structures were intended to replace these but they’ve never phased the old ones out yet. Thought most of their uses have become obsolete.

So POS as a shorthand can mean the Control Tower, the items anchored to it, Customs Gantries, and even Citadels since some players adopted it as shorthand for “anything a player constructs in space”. The usage can get confusing and mostly has to be inferred by context.

starbases, aka “sticks” if they’re no longer in use and without force field. You can find plenty via combat probing, including in hisec.
here’s a minmatar example 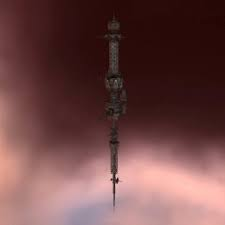 Some players still use them for daytripping e.g. in w-space.