Today I finnaly got some time to mess around in Pyfa with the new faction combat battlecruisers and destroyers. What caught my eye in particular was the Navy Ferox, which seems a bit OP for me: 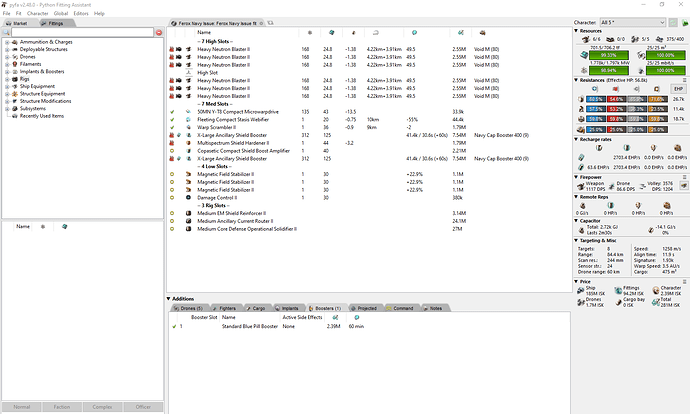 It’s obviously slow, but that tank and DPS …

As for the rest of the combat battlecruisers, Navy Cyclone and Navy Myrmidon can easily fit 2 medium neuts which makes a difference, with the DPS being around 700 - 750. An interesting aspect on the Navy Cyclone is the starting passive shield regen that it has (32 EHP/s, compared to a Drake for example that has 28.2 EHP /s) and the signature reduction bonus , which makes me think of the potential of being a great 100 MN platform.
The Navy Prophecy… idk what to say , there’s nothing so special about it, I find it to lack PG for a beam laser platform . Looks to me like a fleet pulse laser platform.

When it comes to the Navy destroyers, Navy Thrasher seems to be the “winner” . With the speed of around 2k m/s cold and around 3k m/s heated and a signature radius of only 120 m - 150 m (depending on the fit) . I can see them being used as an alternative to arty Svipuls and not only.

Getting back on the Navy Ferox though… Do you think it should be tuned down a bit ?

Only noobs would fit neuts on a link boat. Ever heard of links? You should take some lobotomy stix and create some cheat stix and train something useful for your ships.

With a skirmish and a shield link that cyclone looks ever so slightly better. With great missile application it looks like a very tanky talwar, made for smaller skirmishes.

And on the Ferox Navy Issue you can put a shield link on and replace the soldifier with a thermal resistance rig.
Just remember that Pyfa != EVE, and you should never use both asb’s together or your tank goes bye bye after 9 cycles.

The Prophecy Navy Issue is an immensely tanky laser platform, sporing a buffer of around 120k hp easy, depending on your gear.
And that is without any armor implants or any special gear. In a fleet you (should) have armor links on top of that, making that around 130k-ish hp on a high-speed drone and long range laser platform.

Don’t worry it will be nerfed, they WILL ALL BE NERFED at some point, always happens, I’m just going to wait for prices to drop and nerfs to happen before spending billions on a something that’s going to get neutered.

I mean , sure … I can make builds for solo skirmishing with links , fleet builds with links. There are dozens of posibilities for these new hulls. I just happen to have a particular fit…

And on the Ferox Navy Issue you can put a shield link on and replace the soldifier with a thermal resistance rig.

A matter of personal prefference on the rig , as for the shield link , you’d have to sacrifice something in return for it.

Just remember that Pyfa != EVE, and you should never use both asb’s together or your tank goes bye bye after 9 cycles.

Tell me something I don’t know…

This is not even relevant to the thread, unless you have some input on this:

on the Navy Ferox though… Do you think it should be tuned down a bit ?

There will certainly be tweaks , no doubt about that . Is just a question of how long the fun/pain will last…