So I remember years ago when we still had clone levels and after you got podded you had to purchase your correct Clone Grade or else if you were still in the low grade clone and got podded again, you would lose skill points.

Well as Im sure the first thought you had was, So I can convince some mark to contract me every in game asset they own as a sign of good faith in their effort to win a prize of a game or bonus gift…

Well there has been several times years ago when said mark would be convinced to self-destruct their pod over and over and over repeatedly like hundred times or whatever until all of their skill points were gone because they had ZERO isk left to upgrade their clone.

Was all ruled legal back then and was allowed and considered the marks own decision and fault.

So brings us to today… Can you convince a mark to buy extractors/give them extractors and convince them to extract all of their Skill Points down to 5mill SP and give them to you?

Why would anyone extract all skill points though? Why not accept the skill extractors then self destruct, assuming you are in a pod? And if you are in a citadel, set your jump clone elsewhere and go.

In other words, I can’t envision any hold you could have on a person to cause them to do such action without that hold already being illegal to begin with.

Ehh just like back then. Anything that involved SP is still the lowest form of extortion/scamming that can be done. Nobody gains, it only griefs the player being coerced into doing it.

Tell your friend to find a less damaging scam that doesn’t risk actually making it so people cant play the game and leave. Maybe something along the lines of helping him buy an extractor and paying them back once he sells the initial injector to start his “extraction” process. I’m sure people will fall for that and it doesn’t actually ■■■■ them out of their own SP.

or maybe just let people play the game their own way

I have no issue with scamming or extorting people. My problem is when those scams target people’s long term ability to play the game which can ultimately drive them away forever. Going after their SP can actually inhibit their ability to recoup a loss. Taking their isk/assets does not.

I’m not telling him not to do it, I’m suggesting his friend to target another thing. I even suggested a completely valid scam to run with.

This game hasn’t been a sandbox for a very long time. So just keep telling yourself that. Certain boundaries are and must be set to maintain stability. This is not one of those, but it skirts a line that CCP could very well decide to enforce one day.

They did allow similar things in the past, so it is okay, but it wouldn’t be the first time they changed their stance on an issue. And why would anyone want to run a scam that could actually drive people away in a time when numbers are already dwindling when they could go for a scam that is far easier to pull off and nets them an actual profit?

ok so its allowed then

My concern is with the phrase:

Now if in game, you could convince your marks to do this, using no outside app, voice comms, or the like… Maybe. But if you start using external comms, websites, or the like you may have problems. Now granted, it may not be the extraction of skill points that is the problem, but rather the use of the external equipment but it could still be problematic.

I say this because we already know that bonus rooms can lead to a ban. We also know that the old fake wallet API trick was banned. This latter one was banned not because of the scam but because of the burden it put on CCP customer support and the negative image it gave to API transactions.

So again, if all done in game, you may be ok. But I would petition the GMs directly with all details and see if you can get a ruling before you take any action in this regard.

It is probably best to check with famous internet detective Ripard Teg if this constitutes RL torture before you do it.

EDIT: found a picture of him. Look for this man: 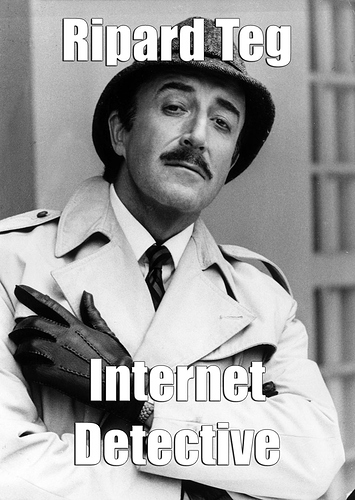 Going after their SP can actually inhibit their ability to recoup a loss. Taking their isk/assets does not.

The way you word it makes it sound like the Bonus Room. In case you want to repeat that activity, be warned that power corrupts silently, slowly infecting your logic and reasoning. You don’t seem to aspire to be the greatest EVE villian, like Erotica1 did, so you might not be in danger of corruption… still, be warned that the invisible line between having fun with someone and having power over someone is crossed easily.

The point to be wary on here is that no scam/extortion/etc can put pressure on someone to use RL money. And trying to ransom SP in that way is likely to put pressure on them to do so. I’d guess if you gave them the extractors in game to use and made it very clear you already had the extractors you ‘might’ be ok, as soon as you tell them to buy the extractors themself you are probably over the line.

And regarding the Erotica1 SP loss: it was petitionable to get that SP back. We got to see E1 rage for once.

and thats where youre wrong

lose all your sp just buy some more

no different from isk or other types of assets

God I hate the existence of Extractors/Injectors for this exact reason. Never in all my days of playing would I have ever expect to read something so ■■■■■■■ ridiculous as this and have it actually be remotely true. Literally worst thing ever added to this game even for all the good it actually has done.

Regardless, if person is drained of their SP they have lost their way to recoup the isk to buy the injectors to recoup their lost SP depending on the extent of the drained SP. As I stated prior, it directly impacts their ability to recoup a loss in a timely fashion which will lead to said person leaving, not sticking around and learning from their mistake as one would do if they lost their isk/assets. Which is why it is the lowest form of extortion/scamming as it’s actually detrimental to the health and stability of the game itself. Which is why SP scams are best avoided because no level of gain on the side of a player is worth the loss of another to the community.

I can’t understand all of you correct. But just want to say that even if someone extract 20mil SP it’s unable to get them back instantly with similar amount of isk/cash. Since skill injectors have huge restrictions. I don’t know if this mean something.

Buy your SP directly from CCP with monthly subscription.